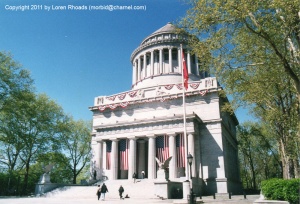 Despite his service as the eighteenth president of the United States, Ulysses S. Grant was better loved for winning the Civil War. During his lifetime, many credited him with ending slavery. His feelings on racism were progressive: during the war, he favored arming “negro” soldiers. Unfortunately, scandal and corruption in his cabinet marred his presidency. After two terms, he retired to bankrupt his family with a series of bad investments. In 1884, he was diagnosed with cancer of the throat. Racing against time, he wrote his memoirs, published posthumously by his friend Mark Twain. Twain gave up most of the profits to support Grant’s wife Julia for the rest of her days.

When initially offered burial space by the mayor of New York City, Julia Dent Grant held out for something a little more centrally located, preferably in Central Park. After it became clear that the mausoleum would cost the family nothing — and she could be buried alongside her husband — she accepted the site just west of Harlem.

Grant’s funeral occasioned a huge international outpouring of grief. Sixty thousand people marched in the seven-mile-long funeral parade, including President Grover Cleveland and former Presidents Chester Arthur and Rutherford Hayes. Over a million people lined the parade route. Officers of both the Grand Army of the Republic and the Army of Northern Virginia carried the coffin into a temporary tomb made of brick. For the first six months, Grant’s body had a 24-hour military guard, which was replaced — as time dragged on and the mausoleum languished unfinished — by New York City policemen.

Shortly after Grant’s death, a Grant Monument Association had been established to collect money for the tomb. Richard Greener, the first African American graduate of Harvard University, served as secretary and personally secured many of the subscriptions. When the tomb was finally completed in 1897, 90,000 people had donated $600,000.

The architect’s original plan called for sculptures on the balcony and a grand staircase down to the Hudson River. Six hundred thousand dollars wasn’t enough money for that. The staircase idea was scrapped and decorations on the tomb’s pediment scaled back to reliefs of Federal eagles at each corner. Two muscular young ladies, representing Victory and Peace, sat with their backs to a plaque that read “Let Us Have Peace.” Those words closed Grant’s memoirs.

President Grant’s mausoleum is an enormous edifice composed of 8,000 tons of white granite. It looms 150 feet high, a square box of a building, crowned with a cupola ringed with Doric columns. John Hemenway Duncan, the architect, meant for it to echo the tomb of Mausolus, one of the Seven Wonders of the Ancient World, as well as the Mausoleum of Hadrian in Rome, known more familiarly now as Castle Sant’Angelo. By referencing the splendors of the past, Duncan unleashed a new wave in Federal architecture. Before the completion of Grant’s tomb, national memorials tended toward obelisks: think of the Washington Monument in D.C. Grant’s Tomb laid the foundation for the Lincoln Memorial. In addition to being a true tomb — because Grant’s body lies within — the General Grant National Memorial is the largest mausoleum in North America.

Inside, the dome soars overhead, airy and ornate, hinting at how busy the strong, simple façade might have been if Duncan had gotten his way. Four sculptural pendentives contain allegorical figures representing stages in Grant’s life, including “Civil Life” and “Military Life.” Coffered archways hold up a balcony ringed by columns. Above them, eagles spread their wings. It is Victorian and overblown in a way the outside is not.

In the center of the floor, an opening looks down on the sarcophagi that are the grand final resting places of Ulysses and Julia Dent Grant. Made of red Wisconsin granite in imitation of Napoleon’s sarcophagus at Les Invalides in Paris, the two stone boxes weighed eight and a half tons each.

Until the 1930s, half a million people paid their respects each year. After that, visitors tapered off. Fewer people survived who had participated in — or even remembered — the Civil War. The wars of the twentieth century made war itself seem less grand and glamorous. The Park Service assumed the monument’s care in 1959. Now the site averages one hundred thousand visitors a year.  It’s a shame this marvel is not visited more often.

Events at Grant’s Tomb.  This weekend (April 17, 2011) they are celebrating Grant’s birthday.

A close-up of the tomb’s facade

An old-time postcard of Grant’s Tomb

The Bear Went Over the Mountain

I'm the editor of Tales for the Camp Fire: An Anthology Benefiting Wildfire Relief. I'm also author of 199 Cemeteries to See Before You Die and Wish You Were Here: Adventures in Cemetery Travel, as well as a space opera trilogy. I'm co-author of a series about a succubus and her angel.
View all posts by Loren Rhoads →
This entry was posted in Cemetery event, Cemetery of the Week, Famous person's grave and tagged Civil War cemetery, General Grant National Monument, Manhattan cemetery, National Park, New York cemetery, New York City cemetery. Bookmark the permalink.

6 Responses to Cemetery of the Week #11: General Grant National Monument