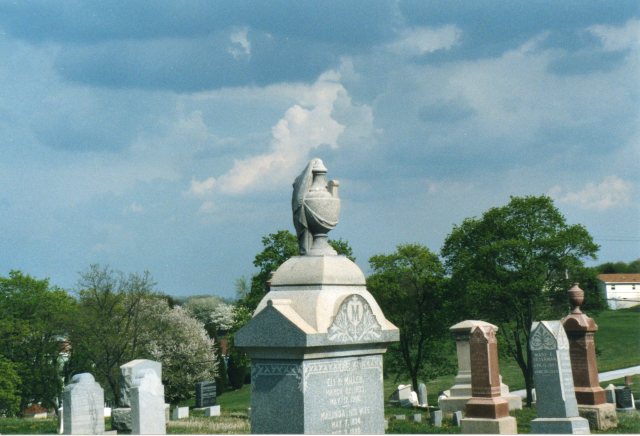 We rolled into Glen Rock, Pennsylvania about 4 o’clock. The little town lies folded into the valley between two close-rising hills. We hoped to find an ice cream parlor, but instead saw only the gas station, two antique shops, a couple of pizza restaurants, and an old historic inn/tavern/restaurant that is boarded up and for sale.

At the top of the hill, we found the graveyard. It didn’t seem to have a name. Perhaps the stone pillars that stood sentry beside the drive had once held an ornate iron sign, but the only thing they said was that trespassing was prohibited from dusk to dawn.

The sky to the east was the ominous bluish of a fresh bruise. When the sun broke through in the west, it struck the trees in such a way that they looked artificial. That had to be green silk for their leaves, it was so bright.

The grass between the gravestones was starred with wildflowers. Violets I could name, but the bright wash of mauve flowers were unfamiliar. Little buttercups and some sort of gray-green shepherd’s crooks also brightened the lawn. It was homely in the old sense of the word, in the sense of being comforting and homelike, without pretensions. I’m so used to seeing lawn tortured into even verdure or dead dry grass that this meadowland was very sweet.

Beyond the crest of the hill, thunder rumbled. We’d driven through a lightning storm as we entered Harrisburg. The winds had dashed the petals from the trees and flung them into our windshield, while bolts of lightning flashed down in the distance. Now I always turned too late to see the lightning, but the thunder continued to grumble at us. I looked up the hill to Mason and the rental car, parked on the crest of the hill.

“That’s how people get killed,” I told him, but he was convinced there was little danger. He promised to watch the storm, as I loaded some film and went back to document the little neighborhood burying patch.

The graveyard sported a lot of upward pointing fingers. One of the stones dispensed with an epitaph by saying “TEXT” and quoting a Bible verse, as if you took your Bible along to the graveyard and could read along. Another addressed the “sacred grave,” entrusting it to care for the precious form entrusted to it. One asked, “Fold her, O Father, in thine arms…”

Some of the most interesting gravestones turned out to be modern. First I came across some where the colors rubbed into the stones were just brilliant. A sprig of lilacs was honestly lilac purple. Another held a river scene with a green tree and beautiful water. The colors brought vibrancy to the bland brick-colored granite.

Also along the path stood a stone inlaid with a series of badges. The “Chief” had served as Chief of Police for many years before being elected Mayor. It was wonderful to see the man’s possessions displayed proudly for passersby.

As we drove away, I realized that not only did I not know the graveyard’s name, I couldn’t guess the street on which it was located.

We stopped at the gas station to get ice cream sandwiches out of its cooler. The rainstorm never came.

I'm the editor of Tales for the Camp Fire: An Anthology Benefiting Wildfire Relief. I'm also author of 199 Cemeteries to See Before You Die and Wish You Were Here: Adventures in Cemetery Travel, as well as a space opera trilogy. I'm co-author of a series about a succubus and her angel.
View all posts by Loren Rhoads →
This entry was posted in Cemetery essay, Photo Challenges and tagged cemetery photographs, Pennsylvania cemetery, photo of the week, postaweek2011. Bookmark the permalink.