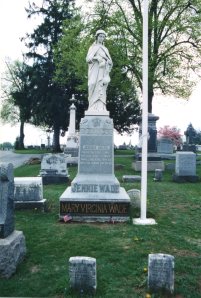 In November 1853, the citizens of Gettysburg, Pennsylvania met to discuss opening a graveyard “where all the dead could repose together,” regardless of sect, rank, or class. Ground purchased on a ridge overlooking the town was named Ever Green Cemetery. Somewhere along the way, its name mutated to Evergreen Cemetery.

It might have continued to be a sleepy, small-town cemetery, if the Confederate Army hadn’t marched up to Pennsylvania in 1863. Cemetery Ridge saw some of the fiercest fighting on July 3rd. Thousands of men and horses tramped through the cemetery during the battle. Both the cemetery and its brick gatehouse were damaged by artillery shells. Later, the gatehouse became a landmark in images of the battle’s aftermath.

After the war moved on, Elizabeth Thorn, wife of the cemetery’s superintendent, did what she could to bury the dead — despite being six months pregnant. Her husband Peter had enlisted in the 138th Pennsylvania Infantry, never dreaming that the war would come so close to home. In the months following the battle, Elizabeth and her elderly father dug five graves a week in the rockiest part of the cemetery. Her memoir of those days, later published in the Gettysburg Times, reports that the stench of the bodies decaying in the field across the road drove her on.

On November 16, 2002, Evergreen dedicated a memorial to the women who served in and endured the Civil War. The statue takes the form of a very pregnant Elizabeth in a Victorian gown, leaning on her shovel. There’s a photo here.

The most-visited gravesite in Evergreen Cemetery belongs to Mary Virginia “Jennie” Wade. The 20-year-old had gone to her sister’s house in town in order to escape the fighting. The only civilian to be killed during the Battle of Gettysburg, she was struck by a stray bullet while “making bread for the Union soldiers,” according to her monument. She was initially buried in the garden at her sister’s house on the 4th of July. In January 1864, her remains were moved to the German Reformed Cemetery in Gettysburg. She was reintered in the Evergreen Cemetery in November 1865. The Iowa Women’s Relief Corps replaced her original tombstone in 1900 with the monument that stands today. An American flag flies at her grave around the clock.

A wealth of other folk connected to the war lie in the graveyard, including Reverend Michael Jacobs, a Professor of Science and Mathematics at Pennsylvania College, who became the first historian of the battle of Gettysburg. Also there is William David Holtzworth, a twice-wounded Civil War veteran, who became a guide to the battlefield. He subsequently toured the battlefield with Presidents Grant, Hayes, and Cleveland, as well as nearly a dozen Civil War generals.

Other permanent residents of Evergreen include baseball’s left-handed pitcher Edward S. Plank, who was called “Gettysburg Eddie,” and poet Marianne Moore, who received the Pulitzer Prize and the National Book Award in the 1950s for her Collected Poems. Time magazine named her America’s greatest living female poet.

The cemetery, which calls itself “Gettysburg’s most historic cemetery,” contains a wealth of lovely Victorian gravestones. It is still open to burials. Ninety-minute walking tours can be arranged for groups of 10 or more by contacting Superintendent Brian Kennell at ever@cvn.net. He is also the author of Beyond the Gatehouse, a guide to Gettysburg’s Evergreen Cemetery. If you order your copy of the guidebook directly from the Superintendent, your purchase benefits the cemetery.

Hi-res panorama of the cemetery

Flash map of the cemetery

Cemetery-focused information on the Battle of Gettysburg

My review of the Beyond the Gatehouse: Evergreen Cemetery

Other Pennsylvania cemeteries of Cemetery Travel:

I'm co-author of a series about a succubus and her angel. Angelus Rose, the final book, came out in February 2020. I am the editor of Tales for the Camp Fire: An Anthology Benefiting Wildfire Relief. I'm also author of 199 Cemeteries to See Before You Die and Wish You Were Here: Adventures in Cemetery Travel--and a space opera trilogy.
View all posts by Loren Rhoads →
This entry was posted in Cemetery of the Week and tagged Civil War cemetery, Gettysburg cemetery, Pennsylvania cemetery, Soldiers' National Cemetery, statuary. Bookmark the permalink.

2 Responses to Cemetery of the Week #22: Gettysburg’s Evergreen Cemetery