Cemetery of the Week #27: the Old Market Square in Rouen 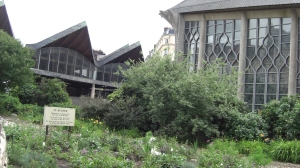 The garden where Jehanne’s pyre stood

Whether Jehanne d’Arc actually commanded the armies of France against the British in the 15th century or merely served as a figurehead who rallied the French to victory, it’s undisputed that she was betrayed when the walled city of Compiegne shut their portcullis, leaving her to face the army of John of Luxembourg.  Six months later, she was ransomed to Pierre Cauchon, the Bishop of Beauvais, who took her to Rouen where he presided over her trial for heresy.

Jehanne was 19 when she was tried by French clergymen in the pay of the English.  She had been wounded at least three times in battle and once while attempting escape from prison.  She could not read and could barely write her name, but she outwitted the judges ranges against her.

After her captors threatened her with torture, she repudiated the voices which had predicted her victories and ultimate downfall.  It seemed they might not find a transgression worthy of death, so her guards stole her dresses, forcing her to wear men’s clothing once more.  The court quickly found her guilty of heresy (for cross-dressing) and sentenced her to death.

Jehanne was burned at a stake in Rouen’s Market Square.  When the fire seemed to be dying, the executioner added more wood and poured oil over it, burning her bones until nothing but ashes remained.  Those were gathered up and flung into the Seine so there would be no relic, no grave that could serve to rally the French against the English.

In the end, no relic was needed.  In 1453, the English were finally driven out of France.  Charles VII took possession of the records of Jehanne’s trial and opened the way for her pardon.

Not much remains in Rouen from May 1431.  Much did not survive the centuries; more was destroyed by fire during World War II.  A cross stands in the old market square near a little garden, which marks the place where Jehanne was martyred.  A church in her name was completed nearby in 1979.

It doesn’t matter that Joan of Arc has no grave.  A steady stream of pilgrims and tourists visits the place where the girl was burned to death.  They are as reverent as if they visited a cemetery.

Tour of the Old Market Square

The Church of St. Joan of Arc

The opening of The Passion of St. Joan of Arc, which has a script from the transcript of Joan’s trial, with a soundtrack by Anonymous 4:

Other Rouen gravesites on Cemetery Travel:

I'm the editor of Tales for the Camp Fire: An Anthology Benefiting Wildfire Relief. I'm also author of 199 Cemeteries to See Before You Die and Wish You Were Here: Adventures in Cemetery Travel, as well as a space opera trilogy. I'm co-author of a series about a succubus and her angel.
View all posts by Loren Rhoads →
This entry was posted in Cemetery of the Week, Famous person's grave and tagged Christian history, Christian saint, French cemeteries, Joan of Arc, medieval tombs, Rouen cemeteries. Bookmark the permalink.

2 Responses to Cemetery of the Week #27: the Old Market Square in Rouen