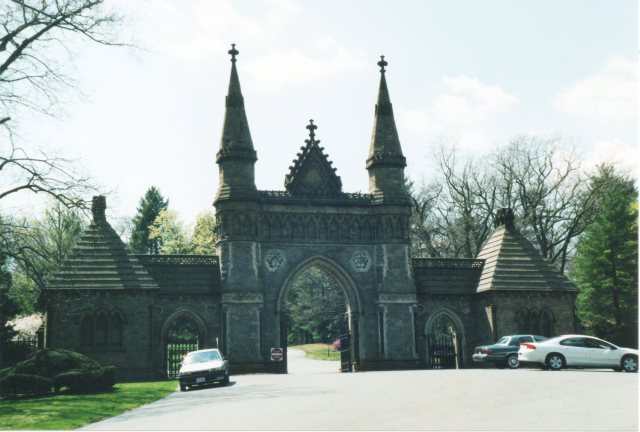 The entrance to Forest Hills Cemetery

Forest Hills Cemetery’s original gateway had been Egyptian, styled after the ancient portico at Garsey, on the Upper Nile.

The cemetery had been founded as nondenominational at the start.  Despite that, the cemetery’s 19th-century clientele rejected Egyptian architecture as too pagan.  They wanted something solid that spoke of good Christian values.  What they got was a grand tripartite Gothic archway, more beautiful to my eyes than the Old Granary Burying Ground’s strange little Egyptian gate.  Forest Hills’ entryway is Gothic in a completely over-the-top fashion, lots of flowery granite capitals above the crumbling sandstone blocks.

It promises, “He that keepeth thee will not slumber.”  A six-pointed star adorned the top of the gateway, but Garden of Memories suggests that it seemed not to be a Star of David, but was rather a Solomon’s seal, signifying the union of soul and body.  That seemed an odd sentiment for a graveyard, since they tend philosophically to lean toward the separation of what’s eternal from what’s mortal.

I'm co-author of a series about a succubus and her angel. Angelus Rose, the final book, came out in February 2020. I am the editor of Tales for the Camp Fire: An Anthology Benefiting Wildfire Relief. I'm also author of 199 Cemeteries to See Before You Die and Wish You Were Here: Adventures in Cemetery Travel--and a space opera trilogy.
View all posts by Loren Rhoads →
This entry was posted in Photo Challenges and tagged Boston cemeteries, Forest Hills Cemetery, Massachusetts cemeteries, postaweek2011. Bookmark the permalink.