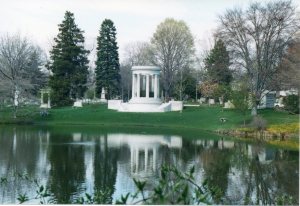 Following in the footsteps of Pere Lachaise in Paris and Highgate Cemetery in London, Mount Auburn Cemetery liberated the dead from the churchyard to rest in the beautiful arms of nature. As America’s first garden cemetery, Mount Auburn was nothing less than a paradigm shift on the soil of Massachusetts.

Dr. Jacob Bigelow, the foremost botanist in New England and a professor at Harvard Medical School, began the discussion of opening a country cemetery in 1825. In 1830, the Mount Auburn site — one mile from Harvard and four miles from Boston — was chosen for its beauty. It had hillocks and dells, valleys and promontories. With Bigelow’s assistance, the cemetery was carefully designed to give a very real sense of space and privacy. Plantings were chosen to turn the cemetery into an arboretum of unparalleled loveliness.

People used Mount Auburn Cemetery for everything, according to an Englishman quoted in Tom Weil’s The Cemetery Book: “Cemeteries here are all the ‘rage’; people lounge in them and use them (as their tastes are inclined) for walking, making love, weeping, sentimentalizing, and every thing in short.” The cemetery was so popular that it inspired not only garden cemeteries across the U.S., but also the urban park movement.

At 72 acres, Mount Auburn Cemetery was the largest burial ground in the United States. (The New Haven Burial Ground, which was considered large at the time, encompassed only six acres.) The cemetery has now swelled to 175 acres, too large to comfortably explore in a single day. Luckily, the cemetery office offers a one-hour driving tour as well as two 75-minute walking tours on cassette tapes or CDs. These are available for for purchase or rental during office hours (8:30 a.m. to 2 p.m. daily at the Entrance Gate). Audio players are also available for rent, or you may bring your own.

In addition, a variety of maps and materials about the Cemetery are available at the Entrance Gate and in the Cemetery office. These materials include flyers highlighting a “Person of the Week,” featuring poetry by the resident bards, and locating the State Champion trees. They may also have picture postcards and copies of the books featuring Mount Auburn. I bought my copy of Blanche Linden’s Silent City on a Hill: Picturesque Landscapes of Memory and Boston’s Mount Auburn Cemetery there.

Although they seem to have nothing scheduled for September, the Friends of Mount Auburn Cemetery offer guided walking tours, slide lectures, and special events at the cemetery. In addition to visiting the celebrities buried there, the Friends explore the history, horticulture, art, and architecture of the cemetery.

Broad Meadow Brook Wildlife Sanctuary leads birdwatching tours of Mount Auburn. Check here for the next scheduled event. Here’s one of the birds I saw there.

With so many other things to see and do at Mount Auburn, the graves serve as adornments, not as the distinguishing features. Still, Famous and Curious Cemeteries by John Frances Marion calls Mount Auburn the “Westminster Abbey of America.” Its permanent residents include Oliver Wendell Holmes, Henry Wadsworth Longfellow, the poet James Russell Lowell, Amy Lowell (who won the Pulitzer Prize for poetry), John Bartlett (compiler of the Familiar Quotations), publishers George H. Mifflin, Charles Little, and James Brown, as well as Dorothea Dix, who pioneered humane treatment for insanity, the painter Winslow Homer, Julia Ward Howe, author of “The Battle Hymn of the Republic,” and Mary Baker Eddy, founder of Christian Science.

I suspect autumn must be quite spectacular amidst such luminaries.

The American Resting Place: 400 Years of History Through Our Cemeteries and Burial Grounds

Famous and Curious Cemeteries: A Pictorial, Historical, and Anecdotal View of American and European Cemeteries

The Cemetery Book: Graveyards, Catacombs and Other Travel Haunts Around the World

I'm the editor of Tales for the Camp Fire: An Anthology Benefiting Wildfire Relief. I'm also author of 199 Cemeteries to See Before You Die and Wish You Were Here: Adventures in Cemetery Travel, as well as a space opera trilogy. I'm co-author of a series about a succubus and her angel.
View all posts by Loren Rhoads →
This entry was posted in Cemetery of the Week, Famous person's grave and tagged Boston cemeteries, Massachusetts cemeteries, Mount Auburn Cemetery. Bookmark the permalink.

7 Responses to Cemetery of the Week #31: Mount Auburn Cemetery