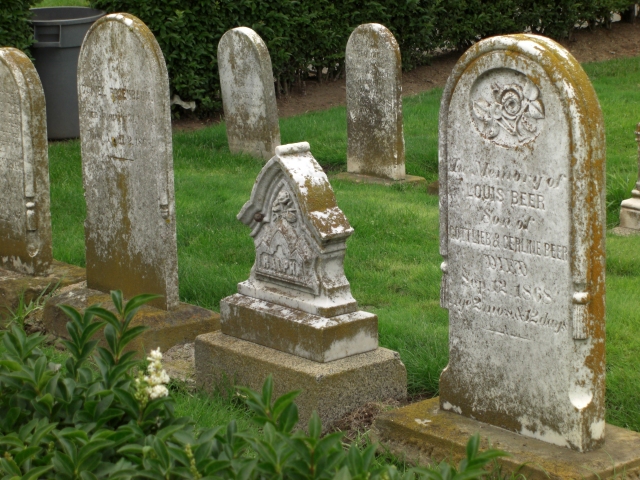 A large part of what I find appealing about grave markers is their attempt at permanence.  By definition, tombstones outlive the people whose names they bear.  Cold, hard, unfeeling: stone strives for immortality by its presence.

In truth, what I’ve learned from cemeteries is that limestone melts, marble breaks, slate slivers, and sandstone cracks.  White bronze can become brittle.  The materials of permanence are not so permanent after all.

In the course of my study of graveyards, I’ve learned that permanent burial places, as we think of them, are a fairly recent phenomenon.  I was shocked when I discovered the “final” resting places of millions throughout the U.S.  are rarely final. In San Francisco, the anonymous graves of the Spaniards and Mexicans buried at the Presidio have been consolidated into mass graves at the San Francisco National Cemetery.   In fact, whole cemeteries have been exhumed and shifted from Russian Hill, South of Market, Civic Center, beside the old Veterans Hospital, for miles along Geary Boulevard between Masonic Avenue and Arguello, and from Lincoln Park where the Palace of the Legion of Honor now stands.

San Francisco also had several cemeteries of Jewish pioneers, all of which have been moved to Colma.  The largest of these was in what’s now Dolores Park, in the heart of the very Catholic Mission District.  Vandalism was an ongoing problem before Temple Emanu-El bought the land for Home of Peace in Colma, where these stones now stand.

I love the faces of these old stones. They look as if they’ve led interesting lives. They may be stained and painted with lichen, but still they stand proudly upright. They continue to honor those who lie beneath them and their memories are clear.

Cemetery of the Week #30: the San Francisco Columbarium

I'm co-author of a series about a succubus and her angel. Angelus Rose, the final book, came out in February 2020. I am the editor of Tales for the Camp Fire: An Anthology Benefiting Wildfire Relief. I'm also author of 199 Cemeteries to See Before You Die and Wish You Were Here: Adventures in Cemetery Travel--and a space opera trilogy.
View all posts by Loren Rhoads →
This entry was posted in Photo Challenges and tagged Bay Area cemeteries, California cemeteries, cemetery photographs, Colma cemetery, Home of Peace, Jewish cemetery, photo of the week, postaweek2011. Bookmark the permalink.