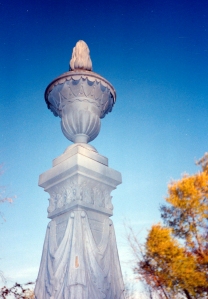 I grew up on a farm between my grandmother’s house and the graveyard, which is named Bendle after its first caretaker.  The names on the gravestones were familiar: Nichols, Carpenter, and Calkins were the names of roads in the area.  I was an adult before I understood that the roads were named for tracks which originally led to the first farms in the area, settled by families that cleared the land and built old red barns that still stood.  Like all children, I thought that Clayton Township has always existed, instead of having been organized as late as 1846.

The Lyons family, whose descendants still live out on Nichols Road, donated an acre of land to the fledgling community to serve as burial ground.  Bendle Cemetery’s first occupant was one of Seth Hathaway’s children around 1838.  That monument, if ever there was one, has vanished.  The oldest existing tombstone remembers Albert Ottaway, less than a year old when he died in 1844.

That initial acre fascinated me when I first began to pay attention to graveyards.  There I saw my first lamb on a child’s grave.  Among the oldest monuments were a six-foot tree trunk with limbs lopped off dedicated to the Youell family and a “white bronze” metal obelisk for the Carpenters.

White bronze monuments are actually made of zinc.  They were sold via a mail order catalog.  Families ordered various plates, ornamented with symbols ranging from human figures to fraternal organization badges to the flaming urn above, to be assembled at the graveyard.  These monuments can be identified by their lovely pale bluish gray color and the fact that they’re hollow.  You can hear the difference when you tap one gently.

All the white bronze cemetery monuments in the U.S. were made by Monumental Bronze Company, which operated a subsidiary in Detroit from 1881-1885.  (The Carpenters were buried in 1891, 1899, and 1902, so it’s unlikely the monument above was made in Detroit.)  Zinc never really caught on, since people often thought it looked cheap compared to stone.  The white bronze monument business lasted only 40 years, closing down in 1914.   Strangely enough, these “cheap” monuments survive, just as crisp and beautiful as the day they were assembled.

What is “white bronze”?

I'm co-author of a series about a succubus and her angel. Angelus Rose, the final book, came out in February 2020. I am the editor of Tales for the Camp Fire: An Anthology Benefiting Wildfire Relief. I'm also author of 199 Cemeteries to See Before You Die and Wish You Were Here: Adventures in Cemetery Travel--and a space opera trilogy.
View all posts by Loren Rhoads →
This entry was posted in Photo Challenges and tagged Bendle Cemetery, cemetery photographs, grave monuments, Michigan cemetery, photo of the week, postaday, postaweek2011, white bronze monument. Bookmark the permalink.