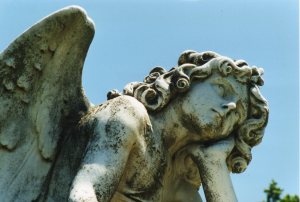 The Crocker Angel earlier in the day

I don’t have a photo from the night I watched sunset in the graveyard, but I can tell you a ghost story about it…

Sunset was a line of blood carved into the sky as we entered the graveyard. There were seven of us: the cemetery docent, the bookseller, the magician, the psychic, the woman who set up the computer system in the University cadaver lab, “Silent Bob,” and me. Almost everyone was armed with a digital recorder and a camera.

The docent led us first toward the potter’s field section of the graveyard. It contained not only indigents, but also people who died without family to claim their bodies. The cemetery had some records of the dead, mostly details of where the bodies — or parts of bodies — were found

We hadn’t gone far onto the empty lawn when we discovered a tablet gravestone set into the grass. “I’ve been a docent here 11 years,” Dennis said, “and I had no idea this was here!” The man was a victim of a shipwreck on a Confederate (CSS) ship.

“He’s just glad we found him,” the psychic said.

I kept seeing lights whiz past my left eye. I wasn’t sure if they were reflections of stray flashlight beams off the weird lenses of my new glasses. “Take a picture up between those trees, would you?” I asked the bookseller.

“Oh, look!” She held the window of her digital camera out toward me. A bright white ball floated in the middle of the screen. Behind it loomed the huge black redwood trees.

I buttoned up my flannel shirt. The docent wore a Hawaiian shirt. The bookseller and Silent Bob were in shirtsleeves. Goosebumps shivered up my legs and it felt like someone laid a cold wet cloth across the back of my neck. I turned to my left to find another fallen gravestone surrounded by the sod.

When I pointed it out, the psychic said, “She fell or was pushed or was persuaded to throw herself down the stairs. She was a servant girl who got pregnant.”

“Did she break her neck?” I asked, rubbing the back of mine to warm it.

“I didn’t know you were psychic,” the bookseller said to me.

“I’m not,” I said, “but she isn’t the first ghost I’ve been aware of.” I moved up the hill until the group was between me and the fallen headstone. Warmth rushed over me as if I’d moved next to a radiator. It felt so good I shivered.

There were other instances, less dramatic than the first. I heard music several times, but that might have been a trick of the air (there wasn’t any wind). I saw red eyes glow in the camera flashes, but smelled skunk and saw several feral cats skulking between the gravestones. I heard a sneeze, but later we saw evidence that at least one homeless man was overnighting. I know that one of the “orb” photos was caused by the flash striking a moth’s wings because I was looking in the right direction when the camera went off.

The eeriest part of the tour was trying to locate the grave of the Black Dahlia. Apparently, she’d had family in Berkeley who gave her their plot rather than see what was left of her body consigned to the potter’s field. I had the strongest urge to sprawl atop the paved path as a safe distance while the others scoured the steep hill for her pink granite stone. I wanted to feel the warmth seeping up from the ground and stare up at the stars. I did not want to step, by accident, on the grave of the woman who had been so violated.

When the others found her, I joined them to stand before her stone. The only epitaph was “daughter.” “Such a pretty girl,” I thought again and again. I refused to imagine the police photographs.

When we moved away from her grave, I realized that my whole body ached. I’d been sick with a cold for several days and coping with my three-year-old’s jet lag as she re-acclimated to West Coast time, but I felt wrung out, insulated, and completely cut off from the outside world. I embraced the feeling and concentrated on the beauty of the moonlit graveyard, the scents of the trees, and the stars sparkling overhead. I only wanted to be where I was, alone in a group of strangers in a familiar place. I didn’t want to know anything more about death.

I'm co-author of a series about a succubus and her angel. Angelus Rose, the final book, came out in February 2020. I am the editor of Tales for the Camp Fire: An Anthology Benefiting Wildfire Relief. I'm also author of 199 Cemeteries to See Before You Die and Wish You Were Here: Adventures in Cemetery Travel--and a space opera trilogy.
View all posts by Loren Rhoads →
This entry was posted in Cemetery essay, Photo Challenges and tagged angels, Bay Area cemeteries, California cemeteries, cemetery photographs, ghost story, Mountain View Cemetery, photo of the week, postaweek2011. Bookmark the permalink.