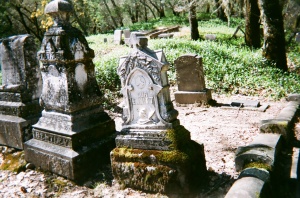 Calistoga Pioneer Cemetery
Foothill Boulevard, south of Petrified Forest Road
Calistoga, California 94515
Founded: 1860s (unofficially). A sign on the gate dates it to circa 1894.
Number of burials: more than 500, according to Findagrave.
Open: dawn to dusk

Surrounded by white picket fence, the Calistoga Pioneer Cemetery climbs a hillside facing Highway 128/Foothill Boulevard just outside of the small town of Calistoga. The cemetery has no parking, but it’s worth parking at the side of the road to explore its beautiful old stones.

In 1975, the Sam Brannan chapter of E Clampus Vitus placed a historical plaque in the cemetery, which reads, “Dating back to the 1860s, this cemetery served as a final resting place for many of the famous Upper Napa Valley pioneers. It wasn’t until 1885 that this cemetery site was surveyed and was permanently established as a cemetery known today as the Pioneer Cemetery.”

A sign inside the gate displays a modern map and a list of interments. Someone maintains a flagpole there and the cemetery is well kept up and lovingly tended, with silk flowers on many of the graves.

The cemetery contains 23 veterans of the Civil War. The majority of them have been confirmed as Union soldiers by Dean A. Enderlin, who maintains an extensive website on the subject. Most of the veterans were buried together in a Grand Army of the Republic plot, but others are scattered throughout the cemetery, buried with their families.

Perhaps the most historically important person buried in the Pioneer Cemetery is Eli “Bud” Philpott, a stage coach driver who was killed in 1881 during the Benson Stage Robbery. His murder was one of the events which precipitated the gunfight at the OK Corral in Tombstone, Arizona. (An article about Philpott’s death in the Mud City Weekender, Calistoga’s monthly local paper, inspired my visit to the graveyard.)

Among those buried in the Pioneer Cemetery are two survivors of the Donner Party tragedy. In 1846, after taking a difficult route from Missouri through Utah, the Donner-Reed Party of settlers got trapped in the Sierra Nevada Mountains by a heavy November snowfall. In mid-December, as supplies ran dangerously low, some of the party went in search of help.

Lovina Graves Cyrus was 12 and Eleanor Graves McDonnell was 14 when rescuers finally led them to safety in March 1847. Of the nine Graves siblings, six survived as orphans. Their father had perished during the initial rescue attempt. Their mother’s corpse was among those which had been partially eaten. The Images of America book on Calistoga by John Waters Jr. quotes some reports that their little brother was clutching her hand and crying when rescuers came. Wikipedia counters that it was one-year-old Elizabeth who held her cannibalized mother’s hand.

The Ghost Hunter’s Guide to California’s Wine Country by Jeff Dwyer notes that there are several ghosts who wander the cemetery. Some of them even wave to passing cars. Another ghost, possibly a Civil War veteran, points at his grave. “Many who have seen this ragged fellow,” Dwyer reports, “wonder if he is trying to get someone to open his coffin to retrieve valuables.”

These days, Calistoga is a little spa town 75 miles north of San Francisco, at the northern end of the Napa Valley. An ancient volcano left the area with rich grape-growing soil and natural hot springs, some of which now provide thermal baths to visitors. Other attractions include a geyser that shoots skyward every 30 minutes and a forest of petrified trees.

Lovely description of the cemetery

Hiking in Calistoga, including the cemetery

The gate to the Calistoga Pioneer Cemetery

I'm co-author of a series about a succubus and her angel. Angelus Rose, the final book, came out in February 2020. I am the editor of Tales for the Camp Fire: An Anthology Benefiting Wildfire Relief. I'm also author of 199 Cemeteries to See Before You Die and Wish You Were Here: Adventures in Cemetery Travel--and a space opera trilogy.
View all posts by Loren Rhoads →
This entry was posted in Cemetery of the Week and tagged Bay Area cemeteries, California cemeteries, Calistoga Pioneer Cemetery, pioneer cemeteries. Bookmark the permalink.

7 Responses to Cemetery of the Week #37: Calistoga Pioneer Cemetery