Sunset Hills Cemetery lies across from the Flint River between the former automotive capital of Flint and the former farming village of Flushing, Michigan. Sunset Hills is a lovely combination of lawn cemetery (with bronze monuments lying flush with the sod) and garden cemetery, full of gorgeous old trees, winding roadways, and peaceful views. In the spring, it comes alive with birdsong. In summer, you’d be amazed at all the shades of green. When autumn comes, the trees seem to catch fire with leaves of gold and orange. It holds a new kind of silence when the snow is on the ground.

Sunset Hills doesn’t have famous people buried in it. The best Findagrave can offer is Arthur Ellsworth Summerfield, who served as Postmaster General from 1953-1961, and Booker Moore, who played fullback for the Buffalo Bills. The Political Graveyard adds only Herbert E. Crouter, who ran as a prohibition candidate for the House of Representatives, the Lieutenant Governorship of Michigan, and the University of Michigan board of regents. It’s unclear to me if he ever succeeded in getting himself elected.

Sunset Hills is worth visiting because it’s home to some of the best sculpture I’ve seen in a graveyard anywhere.

The first sculpture to greet the visitor stands just inside the gate. “The Provider” was sculpted by Derek Wernher in the likeness of Albert Koegel. (Koegel was the patriarch of the Koegel’s hotdog empire. Michiganders are fanatic about their hotdogs and Koegels are considered the best.) Koegel’s interest in the cemetery, dating back to its founding in the 1920s, “provided the beautiful backdrop of large trees we enjoy today,” according to Sunset Hills’ website.

“The Provider” is an older gentleman, raising a tin can up to fill a bird feeder. He wears striped rubber boots, slacks with a belt, and a button-down shirt: generic clothing for a very specific figure. The rough surface of his clothing was patterned in the casting process.

Wernher says, “My representational work does not dictate a story but, rather, captures a moment… All these works focus on the portrayal of the ‘self’ of the individual. We are all solitary, yet we are part of the universe.”

Farther into the cemetery, you come upon a group of statues called “The Generation Bridge” by J. Seward Johnson. A grandfather in a tweed suit offers a broken Hersey bar to a little girl in a quilted pale blue outfit. He looks at her, but she gazes at the blanket in her hands. Beside him on the wooden bench sits her dolly. The sculpture is tucked back under the trees in such a way that it looks very realistic.

“My art is an imitation of life. [The sculptures] invite people to come into that space, so that they don’t feel quite alone.” – J. Seward Johnson 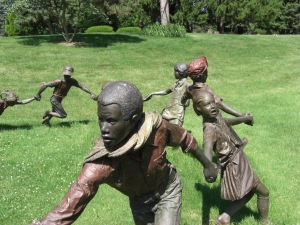 Detail of Crack the Whip

The centerpiece of the Sunset Hills sculpture collection is “Crack the Whip,” a collection of eight children running in a semi-circle to play the game. “Crack the Whip” was the first of Sunset Hills’ sculptures, dedicated in 1983. The sculpture, which cost $85,000 at the time, was donated by an anonymous Flint-area resident who had family buried in the cemetery.

The Smithsonian’s Save Our Sculpture survey, compiled in 1993, says that the original leader of the game had gone missing. He appears in my photos taken in 1998 and 2008, so he must have been replaced. My photos from 1998 are here on yesterday’s post.

The sculpture is comprised of an Asian girl, two African American kids, a Native American, and four white kids, each distinct and individual. They are dressed in cleats and baseball shorts, a headband and a basketball jersey, a pinafore. The Asian girl has lost her Birkenstock sandal, which lies in the grass nearby.

Multiple copies of the sculpture are scattered throughout the Midwest. According to his website, Johnson makes up to seven duplicates of each sculpture. One belongs to Radisson Hotel Engineering Department in Indianapolis, who purchased it in 1986. Another copy stands at the Lincoln National Life Insurance Company in Fort Wayne Indiana. They dedicated theirs in 1987.

J. Seward Johnson’s final sculpture in the cemetery is called “The Gardener.” The man wears blue denim overalls with a handkerchief dangling from his back pocket. His turquoise plaid flannel shirt has its sleeves rolled back. In one hand, he holds a spade. The other holds a small flowerpot, which is sometimes filled with real flowers. On the ground beside him sits a tray containing more flowerpots. Except for the gloss on his skin – which could be sunscreen – he appears real enough that I expect people sometimes ask him directions.

Candice and the Flower Girls

“Candice and the Flower Girls,” by Gary Price, is a multi-figure piece that includes a pair of little girls and an older girl with a watering can, which trickles out a stream of water. Candice wears a sailor dress and dice-shaped ponytail holders. She holds a straw hat in one hand and her watering can in the other, her expression intent. She doesn’t have any paint, so she looks less realistic than the other sculptures in the cemetery.

The flower girls are roughly sculpted, with big grooves that show the pressure of the sculptor’s thumb. Their faces have less personality and are less established in their ethnicity than the others. Price says his goal is lifting the human spirit through sculpture. He often depicts children in natural settings, gardening and exploring nature. 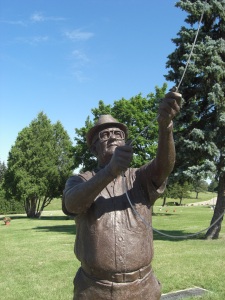 The final sculpture in Sunset Hills is called “The Flag Raiser,” again by Derek Wernher. The cemetery’s grounds crew calls him Charlie. He’s modeled on Charles Smith, grounds supervisor for over 39 years. He wears a large ring of keys clipped at his hip, a big chunky watch, loafers, and eyeglasses with no glass in them, as he reaches up as if raising the American flag.

Sunset Hills is a lovely place to spend a summer’s day, if you find yourself in mid-Michigan. Stop into the cemetery office, opposite the cemetery gates, and they will give you a map of all the sculptures.

My thoughts and more pictures of the Crack the Whip sculpture

I'm co-author of a series about a succubus and her angel. Angelus Rose, the final book, came out in February 2020. I am the editor of Tales for the Camp Fire: An Anthology Benefiting Wildfire Relief. I'm also author of 199 Cemeteries to See Before You Die and Wish You Were Here: Adventures in Cemetery Travel--and a space opera trilogy.
View all posts by Loren Rhoads →
This entry was posted in Cemetery of the Week and tagged Michigan cemetery, sculpture, statuary, Sunset Hills. Bookmark the permalink.

3 Responses to Cemetery of the Week #62: Sunset Hills Cemetery