Cemetery of the Week #65: the African Burial Ground

African Burial Ground National Monument
Duane Street, between Broadway and African Burial Ground Way/Elk Street
Manhattan, New York 10007
Telephone: (212) 637-2019
Opened to the public: October 5, 2007
Size: 6.6 acres is the estimated size of the entire burial ground.
Number of Interments: 419 inside the monument. Up to 20,000 may have once been buried in the surrounding area. Undoubtedly, some of them are still there.
Open: The monument is open every day from 9 a.m. to 5 p.m. The visitor center at 290 Broadway is open Tuesdays through Saturdays from 10 a.m. to 4 p.m. Both are closed on Federal holidays.
Admission: free. However, you must pass through security to see the visitor center or the exhibits inside the Ted Weiss Federal Building. No food or drink allowed.

As early as 1626, the Dutch imported Africans to work as slaves in New Amsterdam, now known as Manhattan. Technically owned by the Dutch East India Company, these Africans could own property, be baptized, and marry. In 1644, 11 male Africans won their freedom and control of the 100 acres they had been farming, but they had to continue to pay taxes in the form of crops to the Company. Their children were still enslaved.

When the British took over and renamed the island New York in 1664, slave laws became more stringent. As much as a quarter of the colonial workforce was enslaved. Africans were brought from the countries now called Sierra Leone, Ghana, Cameroon, Nigeria, Mozambique, and Madagascar. They spoke a variety of languages and practiced different religions. Most suffered from malnutrition and injuries from overwork.

There seems to be no surviving record of when the burial ground was first used, but The Graveyard Shift: A Family Historian’s Guide to New York City Cemeteries suggests it might date from 1697, when Trinity Church began to prohibit the burial of Africans in its churchyard. Until the late 1700s, the “Negros Buriel Ground” – as it was labeled on maps from the second half of the 18th century – was the only graveyard allowed for the African population. The dead were wrapped in shrouds, placed in wooden coffins, and buried with their heads pointing toward the west. Some were buried with beads or coins on their eyes.

Used as a potter’s field, then serving the British as a graveyard for their prisoners during the Revolutionary War, the burial ground officially closed in 1794. After that, a pottery manufacturer used the area as a dump. In 1792, Chambers Street was cut across the cemetery grounds. In 1795, lots were developed and sold. The burial ground was buried and forgotten.

…Until 1991, when the United States General Services Administration broke ground for a new federal courthouse and office building in Lower Manhattan. The contractors were surprised when they began to come across graves 16 to 25 feet below street level. (I’m told that construction on the island of Manhattan is required to excavate as much weight below as the building above will add, in order not to add too much weight and sink the island. I’m not sure that’s true, but it does explain the seven sub-basements below the World Trade Center.) Once anthropologists took over, they estimated that up to 20,000 Africans were buried in an area that once covered as many as five city blocks.

Lay Down Body: Living History in African American Cemeteries reported on the struggle between archaeologists who wanted to excavate the anthropological relics with “dental pick and toothbrush” and the government contractors who preferred to use a backhoe. In the end, parts of 419 skeletons went to Howard University in Washington, D.C. for forensic analysis.

Since the burial ground was significant in both regional and national history, it was listed on the National Register of Historic Places in 1992. A tiny fragment of the graveyard was declared a National Historic Landmark in 1993. The Graveyard Shift reported in 1998 that the remains were supposed to be returned to New York for reburial under a memorial pavilion on the original site.

When I visited in 2002, I was thrilled to see mention of the African Burial Ground Historic District atop the street signs. For once, it seemed that a forgotten cemetery was getting the respect it deserved. When I finally tracked down the remnant of the burial ground on my last morning in New York City, I found only a painted wooden sign listing a few brief facts inside a chain-link fence around a small patch of grass across from the Javits Federal Building. The reburial ceremony had been derailed by September 11, 2001.

Extra coffin inside the visitor’s center.

Finally in October 2003, a traditional African burial ceremony took place. The remains were placed in coffins handmade in Ghana and accompanied to the monument site by dancers, singers, and priests.

President George W. Bush signed a proclamation in February 2006, which designated the burial site as a National Monument. The U.S. National Park Service took over management of the site at that point. The memorial was finally dedicated in 2007. Maya Angelou and Mayor Michael Bloomberg spoke.

Currently, the Park Service mans an Interpretive Center and gift shop on the first floor of the Ted Weiss Federal Building, located at 290 Broadway, between Duane and Reade Streets. This Visitors Center houses a small museum, which discusses the history of Africans in the colonial era. One wall displays archeological photographs of the gravesites. There are the stories the bones can tell us and a record of the grave goods, but everything tangible has been returned to the ground now. “The African Burial Ground,” the Park Service’s brochure says, “is widely acknowledged as one of America’s most significant archeological finds of the 20th century.” It’s good that this museum exists as a record of it.

Next door, inside the Ted Weiss building proper are more exhibits about the burial ground, but I’d visited too late in the day to see them. 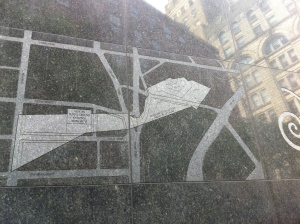 Around behind the building lies the African Burial Ground National Monument itself. First you come upon seven small mounds, which cover the vaults in which the remains were placed. The site includes “The Circle of the Diaspora,” a spiral map of the world surrounded by African symbols and religious talismans from many faiths. The final part of the monument is the 24-foot black stone “Ancestral Libation Chamber,” designed by Architect Rodney Leon.

The monument and visitors center are sobering reminders of the sacrifices forced upon the people who built this country. Plan to leave time to meditate or pray at the site.

The text of President Bush’s proclamation

I'm co-author of a series about a succubus and her angel. Angelus Rose, the final book, came out in February 2020. I am the editor of Tales for the Camp Fire: An Anthology Benefiting Wildfire Relief. I'm also author of 199 Cemeteries to See Before You Die and Wish You Were Here: Adventures in Cemetery Travel--and a space opera trilogy.
View all posts by Loren Rhoads →
This entry was posted in Cemetery of the Week and tagged African American cemetery, African Burial Ground, Black History, Manhattan cemetery, National Park, New York cemetery, New York City cemetery. Bookmark the permalink.

18 Responses to Cemetery of the Week #65: the African Burial Ground