National Memorial Cemetery of the Pacific, with Honolulu in the distance. Vintage postcard.

The name “Punchbowl” comes from the shape of the crater in which the cemetery lies. The crater was formed 75,000 to 100,000 years ago when hot lava seeped through cracks in the old coral reefs. Its Hawaiian name, “Puowaina,” is most commonly translated as “Hill of Sacrifice.” The crater’s first known use was as an altar where Hawaiians offered human sacrifices to their gods.

The National Memorial Cemetery of the Pacific from the rim, looking inward. Vintage postcard.

In the 1890s, a committee suggested the Punchbowl as a new cemetery for Honolulu’s burgeoning population. The idea was rejected because, among other reasons, the living didn’t like the idea of having a city of the dead above them. Fifty years later, Congress authorized $50,000 to establish a national cemetery in Honolulu. Hawaii’s governor offered the Punchbowl for the graveyard, but the money wouldn’t cover the work needed, so the project was deferred until after World War II.

By 1947, Congress pressured the military to create a permanent burial site for the remains of thousands of World War II servicemen temporarily buried on the island of Guam and throughout the Pacific theater. The Army reopened negotiations about the Punchbowl. Construction began in February 1948. 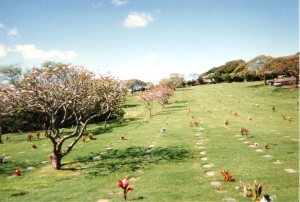 Magnolia trees in bloom at Eastertime, 1996

The remains of soldiers were disinterred from around the Pacific, including from Wake Island, Iwo Jima, Guadalcanal, Burma, China, and the Japanese POW camps. These were transported to Hawaii for final burial. The first interments were made January 4, 1949. These included 776 casualties killed in the Japanese attack on Pearl Harbor. The cemetery opened to the public on July 19, 1949, with the burial of a civilian: war correspondent Ernie Pyle. Eventually, over 13,000 soldiers and sailors who gave their lives in World War II would be buried in the Punchbowl.

Originally, white wooden crosses and Stars of David marked graves at National Memorial Cemetery of the Pacific. Despite the Army’s intention that these monuments would be only temporary, people complained when they were replaced by flat granite markers in 1951. It does the graveyard more of a mid-century lawn cemetery aspect, rather than the upright military monuments seen in Arlington and other American military burial grounds.

Among the people commemorated there are Hawaiian astronaut Elison Onizuka, who died about the Challenger space shuttle and tattoo legend Norman Collins, known as “Sailor Jerry.” At this point, the National Memorial Cemetery of the Pacific is only open to cremated remains. Casketed remains are accepted for burial only in the graves of family members already interred there.

From the bus: the Honolulu Memorial, with the Courts of the Missing which name those lost, missing, or buried at sea during World War II.

Nearly five million people visit the Punchbowl Cemetery each year. It was placed on the National Register of Historic Places in 1976.  There are several options for exploring the cemetery:  The American Legion offers free walking tours of the National Memorial Cemetery of the Pacific. Call (808) 946-6383 for information.  Discover Hawaii Tours does a narrated drive-through of the cemetery, but their buses are not allowed to stop. You can find more information about their tours here.

ETA: There’s a big push to identify the unknowns buried in the Punchbowl after the attack on Pearl Harbor.  Here is more information.

Photos of the cemetery

Map and video of the cemetery

Other Hawaiian cemeteries on Cemetery Travel:

I'm the editor of Tales for the Camp Fire: An Anthology Benefiting Wildfire Relief. I'm also author of 199 Cemeteries to See Before You Die and Wish You Were Here: Adventures in Cemetery Travel, as well as a space opera trilogy. I'm co-author of a series about a succubus and her angel.
View all posts by Loren Rhoads →
This entry was posted in Cemetery of the Week and tagged Hawaiian cemetery, military cemetery, National Memorial Cemetery of the Pacific, Punchbowl Cemetery. Bookmark the permalink.