Cemetery of the Week #85: the Gravesite of Emperor Norton 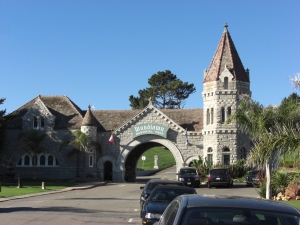 In early San Francisco, when many men arrived without family or friends, they joined fraternal organizations. Among the perks of membership was the ability to buy space in the fraternal burying ground. The Free and Accepted Order of Masons owned a beautiful site (where the University of San Francisco now stands) atop a ridge bounded by Turk, Fulton, Parker and Masonic Streets.

When San Francisco outlawed burial within its city limits at the turn of the 20th century, the Masons followed the Catholic Archdiocese, Jewish congregations, and other groups buying cemetery land south of San Francisco in a little farming village which eventually came to be named Colma. The new Masonic graveyard became the 12th cemetery founded in the village.

The Masons laid their cornerstone on October 29, 1904 on the site of the old Seven Mile House on the stagecoach route between San Francisco and San Jose. A street car ran from San Francisco until 1949. These days, the cemetery is still accessible by mass transit, since the Colma BART station lies right nearby.

Built of blue granite quarried in the Sierra Nevada, the “castle” that spans Woodlawn’s entrance was designed by Thomas Patterson Ross in 1904. It was badly damaged in the 1906 earthquake and took 15 years to repair and complete. In the 1930s, the firm of Merchant and Maybeck added a second wing, which contains offices and the Chapel of Queen Esther, adorned with rich tapestries and an organ, so the Masons could celebrate rituals inside.

Although the Masons no longer own Woodlawn, the cemetery continues to be nondenominational. It’s now part of the Dignity Memorial Network of crematoria and burial grounds. Among the many people cremated at Woodlawn was Anton LaVey, founder of the Church of Satan.

Among the grand monuments in Woodlawn stands one dedicated to Henry Miller, although not the man by that name who springs to mind. When he originally emigrated from Germany, he found a man who couldn’t use his ticket, so Heinrik Kreiser changed his name to Henry Miller. He became a cattle king, ranching over a million cattle in California, Nevada, and Oregon. He owned the largest land holdings in the West at one point.

The most important figure buried in Woodlawn is Joshua Norton, known as Norton I. Norton was a rice merchant who bet all he had on cornering the market. Unfortunately, his ship came in behind two others laden with rice and he lost everything. After a brief period of madness, Norton proclaimed himself Emperor of the United States and Protector of Mexico and patrolled the city on a bicycle. He decreed that a bridge be built linking San Francisco and Oakland – and many still believe that the Oakland-Bay Bridge should be renamed in his honor. He also called for President Lincoln to marry Queen Victoria to cement relations between our countries. In the census, his occupation was officially listed as Emperor. 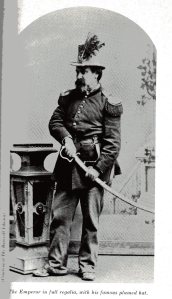 Norton always wore a uniform with a plumed beaver hat. He issued money that was accepted in taverns, restaurants, and theaters. When he died penniless on a street corner in January 1880, the Pacific Club bought him a rosewood casket ornamented with silver, paid for by subscriptions among its members. Joseph Eastland – a Lodge Brother – donated a burial plot in the old Masonic Cemetery. When it seemed that Norton would have no monument, Reverend N. L. Githens of the Church of the Advent passed the collection plate and purchased a simple cross “to remember a Jew who had strayed far from his faith.”

Obituaries appeared in papers as far away as the Seattle Intelligencer and the New York Times. At two miles long, with an estimated 30,000 people, Norton’s funeral cortege was the largest the city had ever seen.

Several events are scheduled in the next week to mark the death of the great man. The California historical association E Clampsus Vitus celebrates its “5th Annual 30th Emperor Norton Day” on January 5, 2013, beginning at Norton’s grave at 10:30 a.m. Afterward, the Clampers will adjourn to a local tavern. Find the announcement here.

The Obscura Society kicks off their new San Francisco Salon Series on the 132nd anniversary of Norton’s ignominious death next Tuesday, January 8, from 7 to 9 p.m. at the DNA Lounge, 375 Eleventh St., San Francisco. They will host a lecture on the only American Emperor. Victorian hobo royalty garb is appreciated, but not required. Tickets are $12 and more details are available here.

My review of City of Souls: San Francisco’s Necropolis at Colma

My review of Permanent Californians: An Illustrated Guide to the Cemeteries of California

Other Colma cemeteries on Cemetery Travel:

I'm co-author of a series about a succubus and her angel. Angelus Rose, the final book, came out in February 2020. I am the editor of Tales for the Camp Fire: An Anthology Benefiting Wildfire Relief. I'm also author of 199 Cemeteries to See Before You Die and Wish You Were Here: Adventures in Cemetery Travel--and a space opera trilogy.
View all posts by Loren Rhoads →
This entry was posted in Cemetery of the Week and tagged California cemeteries, Colma cemetery, Emperor Norton Day 2013, Masonic cemetery, San Francisco cemetery, Woodlawn Cemetery. Bookmark the permalink.

4 Responses to Cemetery of the Week #85: the Gravesite of Emperor Norton