Cemetery of the Week #86: the Taj Mahal

The world’s most famous burial building, according to Tom Weil’s The Cemetery Book, is the Taj Mahal. The immense white marble mausoleum was built by order of the Mughal emperor Shah Jahan in memory of his favorite wife, his third.

Weil goes on to report that when she lay on her deathbed in 1630, the Empress Mumtaz Mahal requested that her husband never remarry and he “build for her the most magnificent tomb the world had ever known.” The Empress had been considered so beautiful the moon hid its face from her. She died in childbirth. 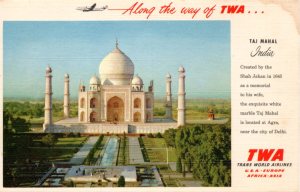 It took nearly 20 years for the mausoleum to be completed. The Taj Mahal, which means Crown Palace, continues to be considered one of the 8 Wonders of the World. Built by 20,000 workers at a cost of 32 million rupees, the building employed craftsmen from Delhi, Qannauj, Lahore, and Multan, in addition to Muslim artisans from Baghdad, Shiraz, and Bukhara. The white marble walls are inlaid with agate and jasper and adorned with scrolling calligraphic verses from the Koran.

In 1676, Frenchman Jean Baptiste Tavernier, one of the first Europeans to see the Taj, reported in his book Travels in India that the scaffolding erected around the mausoleum cost more than the entire work, “because, from want of wood, they had all to be made of brick.”

The Taj stands on a raised platform 186 feet square. Its 58-foot-diameter dome rises to a height of 216 feet. Four minarets flank it. The vast burial complex also contains a main gateway, an elaborate garden, a mosque, a guesthouse, and several other palatial buildings. The Taj Mahal itself is surrounded by four reflecting pools. The river Jamuna passes behind it. Inside the building, the graves of Mumtaz Majal and Shah Jahan stand on one side of the tomb, throwing off its otherwise perfect symmetry.

Shah Jahan died in 1666. He had been deposed eight years earlier by his son, who imprisoned him in the Agra Fort across the river, where he could look out on his wife’s tomb.

As Europeans flocked to India in the 18th century, they were inspired by the Taj Mahal to start a fashion for building mausoleums back home. In Douglas Keister’s Going Out in Style, Xavier A. Cronin reports that, “Many architects regarded India’s Taj Mahal palace-garden mausoleum…as the world most spectacular building.”

Three centuries later, that belief has not changed. “The Taj Mahal is the jewel of Muslim art in India and one of the universally admired masterpieces of the world’s heritage,” according to UNESCO. Three million people visit the Taj Mahal each year.

The Smithsonian report on the restoration done on the Taj Mahal

A closeup view of the Taj Mahal

I'm the editor of Tales for the Camp Fire: An Anthology Benefiting Wildfire Relief. I'm also author of 199 Cemeteries to See Before You Die and Wish You Were Here: Adventures in Cemetery Travel, as well as a space opera trilogy. I'm co-author of a series about a succubus and her angel.
View all posts by Loren Rhoads →
This entry was posted in Cemetery of the Week and tagged India, mausoleum, Taj Mahal. Bookmark the permalink.

6 Responses to Cemetery of the Week #86: the Taj Mahal