Cemetery of the Week #87: Washington’s tomb 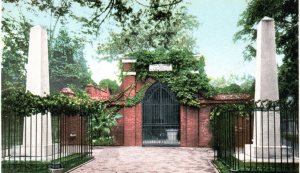 In 1797, George Washington happily retired from public life to return to his Virginia estate on the Potomac River. In December 1799, he toured the estate, called Mount Vernon, in the sleet. Afterward, he developed a sore throat that led to complications. After a two-day illness, Washington died while checking his own pulse in his master bedchamber on December 14, 1799. He was 67. 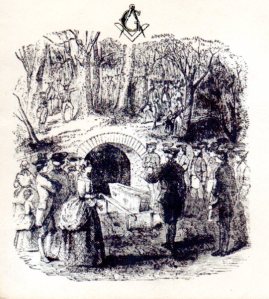 The Masonic ritual at Washington’s first burial, from a first day of issue envelope from 1956.

According to Who’s Buried in Grant’s Tomb? A Tour of Presidential Gravesites, Washington feared being buried alive, so he directed his secretary to keep his body around for three days after death. Washington was originally buried in the simple family vault on the property. The rector of Christ Church in Alexandria, Virginia, read the Episcopal Order of Burial, followed by a Masonic funeral rite conducted by two of Washington’s Lodge brothers.

In his will, Washington selected a site for a new brick tomb to replace the original vault. After an unsuccessful attempt at grave-robbing, the new tomb was finally designed. It wasn’t completed until 1831. His body was moved there, along with the remains of his wife Martha (who died in 1802), and other family members. In 1837, the tomb was enlarged to accommodate two marble sarcophagi, which were then provided for the remains of General and Mrs. Washington.

Over the tomb’s arched gateway, a marble slab says “Within this enclosure rest the remains of General George Washington.” One of my postcards says, the tomb “is a spot sacred to all Americans, a shrine visited annually by thousands.” The official website puts that number at around one million visitors each year, for a total of more than 80 million since 1860, when the Mount Vernon Ladies Association bought the estate in order to preserve it. The nonprofit organization – the oldest national historical association in the country – continues to oversee the estate now. 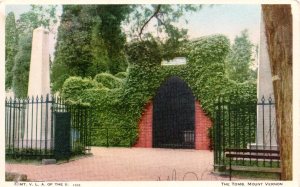 Postcard of Washington’s tomb from 1932. One of the sarcophagi is visible.

The postcard goes on to say that “It is the custom for the officers and crew of all vessels to stand at attention and for the ships bell to be tolled in passing Mount Vernon on the Potomac” out of reverence for the first president. Naval ships continue the tradition.

From April through October, a wreath-laying ceremony takes place daily at 10 a.m. and 2 p.m.

Mount Vernon also has a slave burial ground, which contains graves of both slaves and free blacks who worked for Washington and his family. Because the graves are unmarked, the number and identifies of those buried there is largely unknown. That said, among the unknowns lies William Lee, George Washington’s personal servant during the Revolutionary War.

In 1983, a Slave Memorial was designed and built by architecture students from Howard University. It stands adjacent to a Mount Vernon Ladies’ Association marker placed in 1929 to label the slave burial ground.

Pictures of the tomb, sarcophagus, and the original tomb

Details on the grave-robbing attempt that inspired the construction of the new tomb, as Washington had wanted

The history of Naval honors to Washington’s tomb

I'm the editor of Tales for the Camp Fire: An Anthology Benefiting Wildfire Relief. I'm also author of 199 Cemeteries to See Before You Die and Wish You Were Here: Adventures in Cemetery Travel, as well as a space opera trilogy. I'm co-author of a series about a succubus and her angel.
View all posts by Loren Rhoads →
This entry was posted in Cemetery of the Week, Famous person's grave and tagged Black History, George Washington's grave, Mount Vernon, presidential grave. Bookmark the permalink.

9 Responses to Cemetery of the Week #87: Washington’s tomb