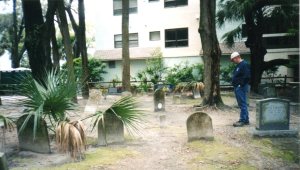 Also known as Harbourtown Cemetery
1 Spinnaker Court at Lighthouse Lane, Sea Pines Plantation
Harbour Town, South Carolina 29928
Founded: 1861
Size: 1 acre
Number of interments: unknown. Some may lie under the adjacent golf course.
Open: unknown. It lies inside a gated community and one source says you have to purchase a day pass from the gatekeeper in order to visit.

Beginning today (2/6/13) and lasting through the month of February is the Hilton Head Gullah Celebration. Details are available here.

Hilton Head Island is the largest sea island off the United States’ coast from Florida to New Jersey. The island lies off just the coast of Beaufort County, South Carolina. It’s 20 miles north of Savannah, Georgia, and 95 miles south of Charleston, South Carolina. It served as a seasonal home to Native Americans for hundreds of years before being discovered by a Spanish expedition in 1521. William Hilton, captain of the Adventure, named the island after himself in 1663. He spent several days there, restocking his ship from the island’s sweet water. 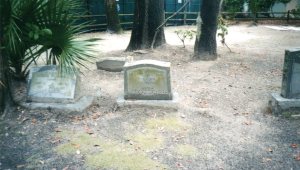 The island became important to the American Sea Cotton trade in the 1800s. During the Civil War, the largest American fleet assembled stormed the island and occupied it. Afterward, it served as the base for Union naval blockades of Savannah and Charleston.

Escaped slaves flocked to the island, where they could own land and attend school while living in government-supplied housing. They stayed on after the war to start a new life. The Gullah culture survives today in food preparation and herbal medicines, in basket weaving, dancing, and worshipping. The Gullah dialect, mostly spoken by elders, combines African pronunciations with European words.

The Braddock’s Point Cemetery is reputed to contain graves of slaves, but these are unmarked. The oldest surviving headstones date to the Civil War. Descendants of those already interred there continue to use the graveyard to this day. 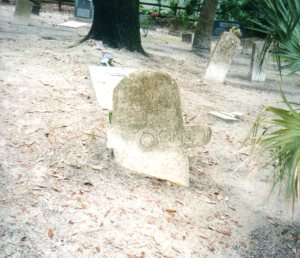 Handmade gravestone for Edward with a round indentation where a plate used to be. Photograph by Kathleen Rhoads.

Charles L. Blockson, professor at Temple University, is quoted in Lay Down Body: Living History in African American Cemeteries: “ African American island tradition places great importance on burials taking place on ‘home ground.’” He continues to say, “Many who once lived on the islands believed that a person is composed of three parts: body, soul, and spirit. When the body dies, the soul departs, but the spirit remains behind and is capable of doing good or mischief to the living. As in West Africa, graves in the sea islands traditionally have been adorned with belongings of the departed and with charms designated to contain or placate the spirit of the person buried there.” 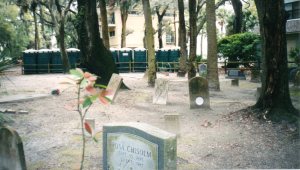 Bare ground and a gravestone with a plate inset. Photograph by Kathleen Rhoads.

Some of the handmade cement gravestones in the Braddock’s Point Cemetery had or have ceramic plates pressed into them. These represent the last plate used by the deceased and are believed to give them something to eat from in the next world.

Another unusual feature of the graveyard is its bare sandy ground. African tradition emphasizes keeping the grave clean by plucking out all the vegetation. Of course, in the humid island air, this is an ongoing battle.

Of Graveyards and Things’ post on the Braddock’s Point Cemetery

Photos of the handmade gravestones

Findagrave has a map to the Braddocks Point Cemetery

I'm co-author of a series about a succubus and her angel. Angelus Rose, the final book, came out in February 2020. I am the editor of Tales for the Camp Fire: An Anthology Benefiting Wildfire Relief. I'm also author of 199 Cemeteries to See Before You Die and Wish You Were Here: Adventures in Cemetery Travel--and a space opera trilogy.
View all posts by Loren Rhoads →
This entry was posted in Cemetery of the Week and tagged Black History, Black History Month, Braddocks Point Cemetery, Gullah cemetery, Hilton Head cemetery, South Carolina cemetery. Bookmark the permalink.

4 Responses to Cemetery of the Week #90: Braddocks Point Cemetery