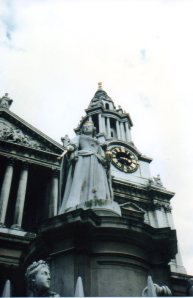 The statue of Queen Anne outside St. Paul’s

Inspired by the funeral of Margaret Thatcher, I’ve decided this week’s featured cemetery should be St. Paul’s Cathedral. (Thatcher will be privately cremated and buried by her family elsewhere, but her funeral was celebrated at St. Paul’s.)

Glorious St. Paul’s is the Cathedral of the Diocese of London, which consists of five areas: Willesden, Edmonton, Stepney, London, and Kensington. A cathedral is the seat of the bishop; in this case, the bishop of London. Westminster Abbey, on the other hand, is lead by a Dean.

The original church dedicated to St. Paul the Evangelist was founded on Ludgate Hill, the highest point in London, in 604. Several churches were built on the same site after catastrophic fires, to be replaced by the medieval cathedral that boasted the tallest spire in the world and some amazing stained glass. That building was under renovation in the 17th century when yet another fire destroyed it. 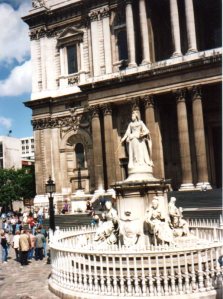 The current St. Paul’s was built by Sir Christopher Wren after the Great Fire of London in 1666. Full of light and air and crowned with luminous gold mosaics of angels, St. Paul’s is magnificent in a way that most churches – even St. Peter’s in Rome – are not. It’s well worth a visit, even if you don’t go underground to visit the dead people.

The crypt beneath the sanctuary is the cathedral’s foremost burial place. At its heart stands Nelson’s Tomb. Admiral Horatio Nelson died in 1805 at the Battle of Trafalgar and was buried in St. Paul’s crypt after a state funeral. He was laid in a coffin made from the timber of a French ship called L’Orient, which he’d defeated in the Battle of the Nile. The black marble sarcophagus that adorns his tomb was originally made for Cardinal Wolsey, Lord Chancellor during the reign of Henry VIII in the early 16th century. Wolsey fell from favor after he couldn’t secure papal permission for Henry to marry Anne Boleyn, so his sarcophagus remained unused at Windsor until a suitable occupant could be found. Atop the monument sits Nelson’s viscount coronet.

Field Marshal Arthur Wellesley, 1st Duke of Wellington, defeated Napoleon at Waterloo. He rests in a casket made of Cornish granite. The banners around Wellington’s tomb were made for his funeral procession. There had been one for Prussia, but it was removed during World War I and never reinstated. 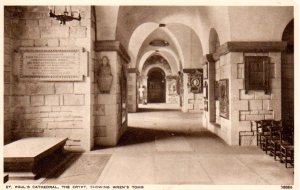 Vintage postcard of the crypt at St. Paul’s, showing Wren’s tomb on the left.

The architect of St Paul’s Cathedral, Sir Christopher Wren, is buried at the east end of the crypt. His tomb is marked by a simple stone and is surrounded by memorials to his family, to Robert Hooke (Wren’s associate), and to the masons and other colleagues who worked on the building. The Latin epitaph above his tomb, written by his son says, “Reader, if you seek his monument, look around you.”

The crypt contains many other tombs and memorials for artists, scientists, and musicians. They include the Pre-Raphaelite painters William Holman Hunt and Sir John Everett Millais; scientist Sir Alexander Fleming, discoverer of penicillin; composer Sir Arthur Sullivan (of Gilbert and Sullivan); and the sculptor Henry Moore.

The royalty buried at St. Paul’s stretches back to the earliest days of Anglo-Saxon England. Sebbi, King of the East Saxons before he became a saint in the 7th century, was buried at Old Paul’s. His black stone sarcophagus was destroyed by the London Fire in 1666. Also buried at Old St. Paul’s was Ethelred the Unready, who died on April 23, 1016. During his reign, the Vikings attacked England repeatedly. Ethelred tried to buy safety by paying tribute. When the agreement was broken, he ordered the slaughter of all Danes in England. His tomb was also destroyed during the fire.

Like Westminster Abbey, the crypt of the cathedral contains cenotaphs to the memories of those buried elsewhere. Among them are author William Blake, who died in obscurity and was buried in Bunhill Fields Burying Ground, where his grave is now lost; Florence Nightingale, who chose to be buried with her parents in St. Margaret’s Churchyard at East Wellow in Hampshire; and T. E. Lawrence, better known to us as Lawrence of Arabia. He’s buried in the Anglo-Saxon church of St Martin, Wareham in Dorset.

Who Lies Where: A Guide to Famous Graves

I'm co-author of a series about a succubus and her angel. Angelus Rose, the final book, came out in February 2020. I am the editor of Tales for the Camp Fire: An Anthology Benefiting Wildfire Relief. I'm also author of 199 Cemeteries to See Before You Die and Wish You Were Here: Adventures in Cemetery Travel--and a space opera trilogy.
View all posts by Loren Rhoads →
This entry was posted in Cemetery of the Week, Church burial, Famous person's grave and tagged English cemeteries, London cemetery, St. Paul's Cathedral. Bookmark the permalink.

2 Responses to Cemetery of the Week #96: St. Paul’s Cathedral