Greenwood Cemetery
5200 Canal Boulevard (but the entrance I used was on Metairie Road)
New Orleans, Louisiana 70124
Telephone: (504) 482-8983
Founded: 1852
Size: 150 acres
Number of tombs: approximately 20,500
Open: Good question. The hours posted on Wikipedia are wrong and the cemetery’s homepage doesn’t list any hours at all. I visited on a Sunday, when the cemetery gate was open and a fair number of visitors bustled in and out, despite threatening skies and the occasional downpour. You might want to call first.

As you take the Ponchartrain Expressway into New Orleans, Greenwood Cemetery is the first graveyard you see. More than a hundred acres of family tombs and association crypts provide the visitor with a lot of wistful beauty to ponder.

Sister to the older Cypress Grove Cemetery across the street, Greenwood Cemetery was also founded by the Fireman’s Charitable and Benevolent Association. In the 19th century, firemen in New Orleans were businessmen who volunteered to keep the city safe. The towering Fireman’s Monument greets visitors with a finely carved young man in a sweeping hat, carrying a hose at the ready. The 46-foot-tall Gothic Revival monument was designed by Charles Orleans, while the statue was executed by Alexander Doyle and carved by Carlo Nicoli. Erected in 1887, it honors firemen who died at their posts before the creation of the professional fire department in 1891. Its base bears the names of 23 volunteer fire companies. 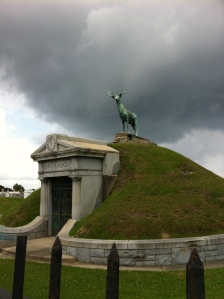 Near the Fireman’s Monument stands a manmade hill or tumulus crowned by the bronze figure of an elk. The Benevolent Protective Order of Elks (or BPOE) Lodge 30 provided burial space for members who had nowhere else to go. Inside the mound lie 18 burial vaults. It was erected in 1912.

On the interstate side of the cemetery stands the first Civil War memorial erected in New Orleans. Designed by Achille Perelli, an anonymous seven-foot-tall infantryman stands atop a pedestal above busts of Generals Robert E. Lee, Stonewall Jackson, Leonidas Polk, and Albert Sidney Johnson. The monument cost nearly $12,000 in 1874 (still the carpetbag era), which was collected by the Ladies’ Benevolent Association. Its low tumulus is the final resting place of 600 Confederate soldiers.

Greenwood Cemetery has several wonderful examples of cast-iron tombs, which I’d never seen anywhere. Some are in rough shape, perhaps from being inundated when the levees broke after Hurricane Katrina in 2005. The Miltenberger tomb, with its three-dimensional angel guiding a soul to heaven, is a prime example.

Greenwood’s most famous resident is John Kennedy Toole, author of the Pulitzer prize-winning A Confederacy of Dunces. He is buried in his mother’s tomb on the Latanier path between the Hawthorne and Magnolia Walks. Her tomb is marked Ducoing.  From the Cemeteries streetcar on Canal Street, you enter the cemetery at the caretaker’s building and turn right. The names of the paths are stenciled on the curb. Latanier is almost the final path before you reach the cemetery’s edge.

As always in New Orleans’ cemeteries, be aware. When I visited, there was such a good stream of people in and out that I never felt unsafe.  All the same, be careful how you wander.

A map of Greenwood, Metairie, and the other local cemeteries

The NOLA Cemeteries entry on Greenwood

New Orleans Cemeteries: Life in the Cities of the Dead

I'm co-author of a series about a succubus and her angel. Angelus Rose, the final book, came out in February 2020. I am the editor of Tales for the Camp Fire: An Anthology Benefiting Wildfire Relief. I'm also author of 199 Cemeteries to See Before You Die and Wish You Were Here: Adventures in Cemetery Travel--and a space opera trilogy.
View all posts by Loren Rhoads →
This entry was posted in Cemetery of the Week, Famous person's grave and tagged cemeteries in new orleans, civil war memorial, family tombs, Greenwood Cemetery, New Orleans cemeteries, new orleans louisiana. Bookmark the permalink.

6 Responses to Cemetery of the Week #97: New Orleans’ Greenwood Cemetery