Cemetery of the Week #104: Lakeside Cemetery 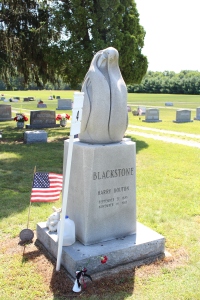 Deep in the heart of southwest Michigan’s Amish country, Colon is “the world capital of magical illusion,” according to Weird Michigan: Your Travel Guide to Michigan’s Local Legends and Best Kept Secrets. Among its attractions is the so-called Magicians’ Cemetery, where many of the 20th-century’s stage magicians chose to leave their final marks.

Grave of Don Alan McWethy, “one of the 100 most influential magicians of the 20th century,” according to Magic Magazine.

Colon is a small town of about 1200 people, significantly fewer than reside in the cemetery. Every August, the town hosts Abbott’s Magic Get-Together, “a four-day convention featuring seminars, demonstrations, and public performances by some of the world’s leading illusionists,” as well as a tour of the cemetery. This year’s Get-Together was August 7-10.

Colon became a magical town in 1925, when Harry Blackstone, who would become the most popular stage magician of the mid-twentieth century (with both a network radio show and a comic book) bought property in the area. He and his troupe spent summers in Colon, working out their new shows before going out on the vaudeville circuit. Each year, Blackstone debuted his new show at Hill’s Opera House for the locals before taking it on the road. 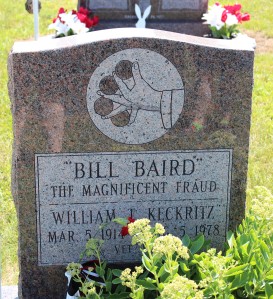 The grave of Bill Baird, the Magnificent Fraud

One of Blackstone’s summer visitors was Percy Abbott, an Australian magician who built tricks. After settling in Colon, Abbott founded Abbot’s Magic Manufacturing Company, the world’s largest producer and mail-order purveyor of magic paraphernalia.  In 1934, he sponsored the first of the yearly Magic Get-Togethers.

According to Rootsweb.com, records for the rural graveyard did not begin to be kept until 1900. The only record of burials previous to that are the stones that mark those graves. That makes me uncertain how many people are buried in Lakeside.

Lund founded of the American Museum of Magic in Marshall, Michigan, which has the largest collection of magic artifacts on display in the US.

I’ve had a huge amount of fun researching this cemetery of the week.  I hope you’ll enjoy some videos of the performers buried here, but not forgotten.

A video feature of one of the Get-Togethers:

The American Museum of Magic’s page on Lakeside Cemetery

A history of the town of Colon

Geocache information and detailed biographies of the Blackstones.

I'm the editor of Tales for the Camp Fire: An Anthology Benefiting Wildfire Relief. I'm also author of 199 Cemeteries to See Before You Die and Wish You Were Here: Adventures in Cemetery Travel, as well as a space opera trilogy. I'm co-author of a series about a succubus and her angel.
View all posts by Loren Rhoads →
This entry was posted in Cemetery of the Week, Famous person's grave and tagged Colon Cemetery, Lakeside Cemetery, Michigan cemetery, stage magicians. Bookmark the permalink.

3 Responses to Cemetery of the Week #104: Lakeside Cemetery