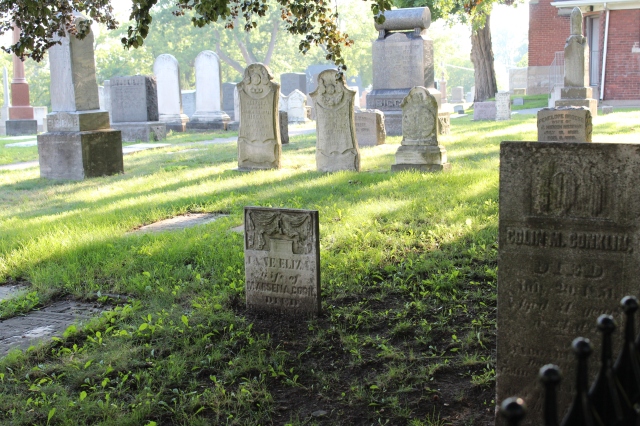 I’ve already written about Drummond Hill Cemetery, but the photo challenge for the week is Focus, so I knew the sort of photo I wanted to post.

I visited Drummond Hill late in a busy day.  We’d gotten up early to explore the tunnels behind Niagara Falls, then took a ride on the Maid of the Mist below the falls, then walked along the rapids farther out along the river.  My parents planned to take my daughter back to the hotel to swim in the pool, but as we passed the cemetery on our way, my dad wheeled down a side street and dropped me off at the back gate.

Mourner leaning on a funeral urn

I had the graveyard mostly to myself.  I admired the Victorian stones, many of which have been laid flat in the grass.  The iconography spanned from weeping willows and mourners at the graveside to Jane Eliza’s sarcophagus (above).  The stones hadn’t fared well in the damp, cold Canadian winters, but the man who’d labored over them had been an artist.  I wondered if anyone now knows who he was.

It was tricky to photograph the cemetery with the late afternoon sunlight behind the headstones.  I took several photos that I think of as “views,” pulling back from individual stones to see the graveyard as context, as scenery. The photo at the top was taken in the shadow of the old tree that may predate the pioneer graves beneath it.

I like that photo because it shows the range of stones in the graveyard, from the red granite column on the extreme left side through the bright white marble to the weathered gray granite with the bolster on top.  I like the sense of the age of the cemetery, with its ranks and ranks of monuments.  I even like the mist that fills the air and reminds me that the falls are not really very far away.

I'm co-author of a series about a succubus and her angel. Angelus Rose, the final book, came out in February 2020. I am the editor of Tales for the Camp Fire: An Anthology Benefiting Wildfire Relief. I'm also author of 199 Cemeteries to See Before You Die and Wish You Were Here: Adventures in Cemetery Travel--and a space opera trilogy.
View all posts by Loren Rhoads →
This entry was posted in Photo Challenges and tagged Canadian cemetery, cemetery photographs, Drummond Hill Cemetery, niagara falls ontario canada, photo of the week, postaweek2013. Bookmark the permalink.