Vintage postcard of the grounds at White Chapel Memorial Park

White Chapel Memorial Park lies alongside I-75, the chief north/south highway through Lower Michigan. It was the original memorial park cemetery in Michigan, introducing the state to the simple brass plaques placed flush in the ground that were pioneered by Forest Lawn in Glendale, California. In fact, when White Chapel opened on June 11, 1928, it was the first memorial park east of California. 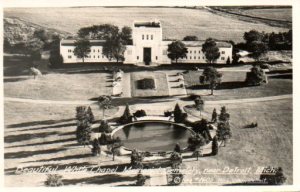 The guiding principle of the memorial park concept was that rural cemeteries like Mount Auburn and Green-Wood, with their mortuary sculpture and mournful epitaphs, were old-fashioned. The world was changing rapidly in the 1920s: “Present-day enlightenment cannot tolerate the association of depressing, gruesome, and distracting objects with the final resting place of loved ones,” says their sales brochure published in 1928. “Here every environment speaks not of death, but of happy memories and the peace of life everlasting.”

Another of the innovations White Chapel brought to Michigan was a four-manual pipe organ, which was “capable of reproducing the tones of practically every known musical instrument.” It was specially designed by the Aeolian Company of New York City, with the intention of providing soft music “audible throughout the entire Park,” according to the vintage brochure.

Among the monuments adorning the very flat grounds at White Chapel is a larger-than-life-sized polar bear guarding an army helmet and cross. He commemorates Michigan soldiers who fought the Russians in World War I. According to the Roadside America listing for the monument, the men of the 339th Infantry (dubbed the Polar Bears) were the only Americans to actually fight the Russians in “real combat.” More than 200 men, many of them from the Detroit area, died in battle or from the harsh winter conditions in Russia. In 1929, surviving Polar Bears returned to Russia to recover the bodies of their comrades. 56 of them were reburied here in May 1930.

Among the historically important or infamous names buried at White Chapel are Dr. Jack Kevorkian, who assisted 130 suicides until he was imprisoned (His epitaph reads, “He sacrificed himself for everyone’s rights.”); John DeLorean, whose marker bears the image of his iconic car; Mauri Rose, a three-time winner of the Indianapolis 500; Sgt. Robert R. Shumard, the assistant engineer on the Enola Gay, which dropped the bomb on Hiroshima in 1945; and the last survivor of the John Dillinger gang, Russell Lee Clark.

Regarding White Chapel Memorial Park’s unusual name: the cemetery has no connection to the poor neighborhood in London where Jack the Ripper tore apart his victims. Instead, Michigan’s White Chapel is dominated by the enormous Temple of Memories Mausoleum. Said to be inspired by early Greek architecture (although the angels and other ornamentation seemed more Art Deco to me), the structure was built of “imperishable concrete and steel” faced with marble, granite, and bronze. It really stands out on the runway-flat lawn surrounding it.

In addition, the vintage brochure speaks of the “exclusive” nature of the White Chapel Memorial Park while pointing out the reasonable prices of its graves. The Last Great Necessity reports that Forest Lawn, first of the memorial parks, defended in court its right to cancel the sale of a grave plot to an African American lot holder who did not reveal his race at the time of the purchase. The book goes on to point out that White Chapel was one of the first cemeteries “to be so designated in any town or city that itself did not include ‘White’ in its name.” Segregation of memorial parks, the book continues, “was a nationwide trend.”

This trend continued in White Chapel into the 1960s, when an honorably discharged World War I veteran was removed from his newly dug grave and evicted from the cemetery. George Vincent Nash was a full-blooded Winnebago (also called Ho-Chunk), but the cemetery president said that 40,000 plot owners “had paid for the restriction” of the “type” of people who could be buried at White Chapel. It didn’t matter that Nash’s wife, part Chippewa, had been buried in the cemetery without incident since 1949.

According to Richard Bak, author of Boneyards: Detroit Under Ground, Senator Basil W. Brown of Detroit sponsored legislation that prohibited discrimination by race or color in private cemeteries. The bill passed into law in 1961 and was upheld by a State Supreme Court decision in 1966. “Although largely overlooked today,” Bak reports, “gaining equality inside Michigan’s graveyards was considered a significant early victory in the Civil Rights movement.”

Some lovely photos of White Chapel

The Grave-Cast tour of White Chapel

I'm co-author of a series about a succubus and her angel. Angelus Rose, the final book, came out in February 2020. I am the editor of Tales for the Camp Fire: An Anthology Benefiting Wildfire Relief. I'm also author of 199 Cemeteries to See Before You Die and Wish You Were Here: Adventures in Cemetery Travel--and a space opera trilogy.
View all posts by Loren Rhoads →
This entry was posted in Cemetery of the Week, Famous person's grave and tagged Detroit cemetery, memorial park, memorial park cemetery, Michigan cemetery, White Chapel Memorial Park Cemetery. Bookmark the permalink.

2 Responses to Cemetery of the Week #105: White Chapel Memorial Park