Cemetery of the Week #107: Bellefontaine Cemetery 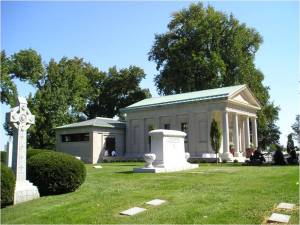 Once on the outskirts of St. Louis, Missouri, Bellefontaine Cemetery began as a little family plot. Its earliest monuments include Stephen Hempstead, a Revolutionary War veteran (died in 1817) who was buried in his family plot on his own farmstead. Near him lies Manuel Lisa (died 1820), one of the founders of the Missouri Fur Company. He had been buried in the Catholic Cemetery closer to town, but was moved to the Hempstead farm in 1830. 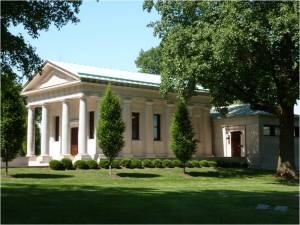 Nearly two decades later, a rural cemetery committee — headed by a prominent banker and a lawyer who had been mayor several times — predicted the growth of St. Louis, perched as it was on the edge of the west and alongside the Mississippi River. They foresaw that the old pioneer cemeteries stood in the way of expansion. They purchased 138 acres of the Hempstead farm for a new Rural Cemetery in 1849.

The lovely name Bellefontaine comes from the fort of the same name that had lain up the road from the Rural Cemetery.

According to Famous and Curious Cemeteries, burials began even before the cemetery could be properly planned. In June 1849, a cholera epidemic swept upriver from New Orleans. By mid-August, the population of St. Louis had been literally decimated — and the new cemetery was in common use. 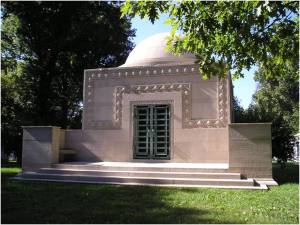 Perhaps the most famous person buried in Bellefontaine is General William Clark, half of the Lewis and Clark Expedition. He also served as governor of the Missouri territory. He lies with his family beside a granite obelisk unveiled during the 1904 World’s Fair, which celebrated the 100th anniversary of the Louisiana Purchase.

Also buried here is Adolphus Busch, the beer baron, and his son-in-law, Eberhard Anheuser. Other notables include James Buchanan Eads, the engineer who constructed the ironclad gunboats used in the Civil War; Henry Taylor Blow, the abolitionist who set Dred Scott free; his daughter Susan, who founded the first kindergarten in the US; and poet Sara Teasdale, who won the first Pulitzer Prize given to a woman for her book of poetry called Love Songs.

More recently, William S. Burroughs, Beat Generation poet and author of Naked Lunch and so many more books, was buried in Bellefontaine on his family’s plot. Burroughs’ namesake father was the founder of the Burroughs Corporation and pioneer of the adding machine. 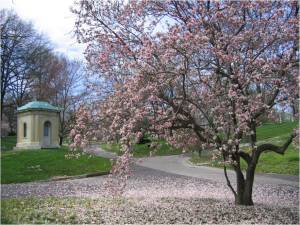 In addition to being an arboretum with over 180 species of trees and shrubs, Bellefontaine holds 100 acres of undeveloped land, some of which has been re-converted to prairie. The cemetery provides habitat for foxes, waterfowl, wild turkeys, and many migratory birds. Watch their website for events related to the arboretum. 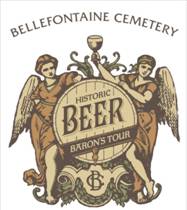 In October, Bellefontaine will host the second annual Beer Barons Tour. Tickets are $40 in advance, $50 day of the event, and benefit the Friends of Bellefontaine Cemetery, a nonprofit organization which supports the cemetery’s rich heritage, important architecture, and beautiful landscape. The ticket admits you to a guided tour, live music by Miss Jubilee and the Humdingers, St. Louis food favorites, a free commemorative gift, and samplings of local craft beers.

Full disclosure: these lovely photographs were provided by Bellefontaine Cemetery.  I haven’t been yet, but man oh man, do I want to go now.

Schedule of events coming up at Bellefontaine, including details of the Beer Barons tour

Interiors of the Wainwright tomb

I'm co-author of a series about a succubus and her angel. Angelus Rose, the final book, came out in February 2020. I am the editor of Tales for the Camp Fire: An Anthology Benefiting Wildfire Relief. I'm also author of 199 Cemeteries to See Before You Die and Wish You Were Here: Adventures in Cemetery Travel--and a space opera trilogy.
View all posts by Loren Rhoads →
This entry was posted in Cemetery of the Week and tagged Bellefontaine Cemetery, Missouri cemetery, St. Louis cemetery. Bookmark the permalink.

3 Responses to Cemetery of the Week #107: Bellefontaine Cemetery