Near the Jewish cemetery called Hillside Memorial Park and Mortuary lies Catholic Holy Cross Cemetery. Holy Cross mimics the design of the Forest Lawn chain, with headstones replaced by small stone plaques set flush with the sod. At 200 acres, Holy Cross is the largest of the 11 Catholic cemeteries in Los Angeles.

Culver City, home of Holy Cross, lies west of downtown Los Angeles and just south of Century City. When the cemetery was founded in 1939, Culver City was considered the “heart of the film industry.” Because of that, many film industry veterans chose Holy Cross to be their final home. According to Laid to Rest in California, the cemetery staff is very helpful in pinpointing anyone you might like to visit on the cemetery maps.

View of the grotto at Holy Cross

Most celebrities surround the manmade grotto on the high ground in the southwest part of the cemetery. Once you enter the ornate main gate, turn left and drive up the hill. A grotto is a small cave, usually artificial, in a garden or park. In Europe, natural grottoes like the one at Lourdes are considered sacred sites, where Christian or even earlier miracles have occurred. In Los Angeles, they build their own grottoes and no one expects miracles.

This pile of rocks hosts several white marble statues: the Virgin with hands clasped in prayer, Joseph displaying the baby, and several kneeling angels who looked as if they’d been meant to adore at a crèche rather than gaze at the sod. Someone had placed flowers in front of one of the angels’ knees. We found Rita Hayworth’s monument in the grass on our way over to see her. 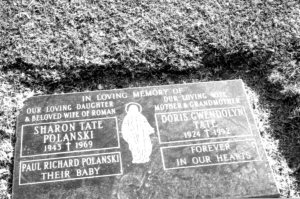 Sharon Tate’s grave also lies near the grotto. A polished granite slab with white lettering remembers “Our Loving Daughter & Beloved Wife of Roman,” 26-year-old actress Sharon Tate Polanski, and Paul Richard, “Their Baby.” According to Helter Skelter, Susan Atkins made a point of stabbing Sharon—eight months pregnant—in the belly, in order to kill the baby before it could be born. (Atkins was the first of the Manson Family killers to die in prison.)

Down the hill a little way, Bela Lugosi rests in the same row as Bing Crosby. Elsewhere in the cemetery are buried Ray Bolger and Jack Haley (respectively, the Scarecrow and the Tin Man from The Wizard of Oz), comedian John Candy, director John Ford, musical comedian Spike Jones (but not namesake Spike Jonez), Fred MacMurray, dancer Ann Miller, Rosalind Russell, Lawrence Welk, and many, many more.

Seeing Stars’ tour of Holy Cross, complete with map of the grotto area

IMDB’s list of stars at rest at Holy Cross

News story about the cemetery

Photos of the interior of the mausoleum

Forever L.A.: A Field Guide to Los Angeles Area Cemeteries and their Residents

Laid to Rest in California: A Guide to the Cemeteries and Grave Sites of the Rich and Famous

Permanent Californians: An Illustrated Guide to the Cemeteries of California

Other graveyards of the Hollywood stars on Cemetery Travel:

Cemetery of the Week #5: Hollywood Forever

Cemetery of the Week #14: the Original Forest Lawn

Cemetery of the Week #51: Angelus-Rosedale Cemetery

I'm co-author of a series about a succubus and her angel. Angelus Rose, the final book, came out in February 2020. I am the editor of Tales for the Camp Fire: An Anthology Benefiting Wildfire Relief. I'm also author of 199 Cemeteries to See Before You Die and Wish You Were Here: Adventures in Cemetery Travel--and a space opera trilogy.
View all posts by Loren Rhoads →
This entry was posted in Cemetery of the Week, Famous person's grave and tagged California cemeteries, celebrity dead, Holy Cross Cemetery, Los Angeles cemetery. Bookmark the permalink.

4 Responses to Cemetery of the Week #110: Holy Cross Cemetery