The Most Beautiful Cemeteries on Cemetery Travel

Last week I talked about the Most Morbid Cemeteries on Cemetery Travel. That was a fairly easy list to make.  Today’s list is much more subjective.  In addition to beauty being in the eye of the beholder, it’s also dependent on season.  A graveyard in spring is likely to be subjectively more beautiful than a graveyard in winter: flowers trump bare branches, blue skies trump gray, lush green lawn trumps unbroken snow.  A case could be made for the opposite, of course, but I’m sensitive to cold and live in foggy, brown-in-summer California. We long for what we don’t have.

Highgate Cemetery in May

I’ve been to Highgate twice: once in January, once in June. Although winter had stripped the branches, the ivy was still glossy and green and primroses bloomed on some of the graves, bright in the gloom.  Summer was an entirely different experience:  green thrived everywhere, all but swallowing up the old angels standing guard over the graves. The Friends of Highgate Cemetery oversee the place as managed wild land, encouraging foxes, birds, rabbits, and other wild things to call it home.  They try to keep the monuments from falling to ruin, but let Nature rule.  A trip to Highgate is what started me on the road of cemetery exploration. I think it would do the same for anyone. I’d love to go back and see it in spring sometime — and in winter, too.  This is one place where snow would add its own kind of magic.

In 2002, I was lucky enough to plan a Grand Tour of East Coast graveyards.  The day we reached Swan Point, spring was in full sway.  One hillside shone gold with daffodils. The Seekonk River shimmered, visible through the trees, a startling hyper-rich blue.  The grass was green and the fruit trees on fire with blossoms.  Even the air smelled perfumed.  It was impossible not to fall in love. 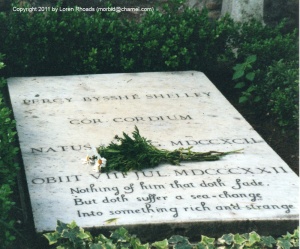 Week #8: The Protestant Cemetery of Rome in Rome

Every Italian graveyard I’ve visited was full of one-of-a-kind statuary that could take your breath away.  The Protestant Cemetery had the added poignancy that these were outcasts, buried here because none of the Catholic burial grounds would have them.  Here are remembered John Keats, who was so Romantic that his name doesn’t even appear on this gravestone, and Percy Shelley, whose friends soaked his body in wine and cremated it on the beach near Viareggio. Beyond them stands a forest of statuary lovelier than any museum’s collection. 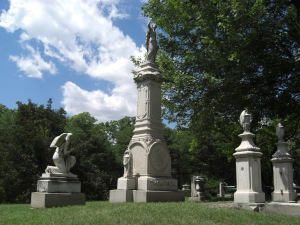 I grew up in Michigan, so I’m partial to the particular shade of blue in the summer sky painted by the Great Lakes above my home state.  When I first started to drive down to Detroit to explore its historic cemeteries, I started with Elmwood, site of a battle in the French and Indian War. Frederick Law Olmsted (designer of Central Park) re-designed the graveyard to include roads that swoop over and around of the rolling hills. He also planted the groves of trees where squirrels, pheasants, and other wildlife now live.  A sense of peace pervades Elmwood that belies its location right downtown.

I discovered Lake View by accident while my dad was at the Cleveland Clinic.  I knew that President Garfield was entombed there, but I wasn’t prepared for the wash of golden leaves that had drifted around the headstones.  Since I was guiltily stealing an hour away from the hospital, my photos don’t do the place justice, but one of my favorite cemetery statues anywhere is the brooding warrior angel Michael who stands over the grave of John M. Hay, Secretary of State under President William McKinley. I wouldn’t mind having him stand guard over me for eternity.

It was hard to limit myself to just five beautiful cemeteries.  I’m sure I’ll regret leaving out Hollywood Forever, the New Jewish Cemetery of Prague, and Mount Auburn Cemetery.  There are others that probably would have made this list, if only I’d visited on a different day or in a different season.  There are so many, many more that I’m sure are lovely, but I haven’t had the opportunity to see for myself yet.

I’d love to hear you make a case for the cemetery you think is most beautiful.

I'm the editor of Tales for the Camp Fire: An Anthology Benefiting Wildfire Relief. I'm also author of 199 Cemeteries to See Before You Die and Wish You Were Here: Adventures in Cemetery Travel, as well as a space opera trilogy. I'm co-author of a series about a succubus and her angel.
View all posts by Loren Rhoads →
This entry was posted in Cemetery essay and tagged Elmwood Cemetery, Highgate Cemetery, Protestant Cemetery, Swan Point Cemetery. Bookmark the permalink.

9 Responses to The Most Beautiful Cemeteries on Cemetery Travel