Cemetery of the Week #113: Grave of Robert Louis Stevenson 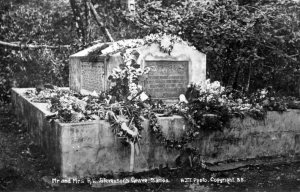 I had trouble researching this one, since the websites based in Samoa don’t appear to be entirely up-to-date. Still, I adore Stevenson, so I’ll present what I’ve found. Please forgive me if it’s not as complete as some of the other Cemetery of the Week entries.

Robert Louis Stevenson came to the South Pacific nation of Samoa in 1888. He was on assignment from Scribner’s, writing South Seas dispatches as he explored the Marquesas, the Sandwich Islands (now Hawaii), and then ending up in the archipelago of Samoa.

The tropical weather eased his tuberculosis and he decided to stay in Samoa in 1889. He and his wife Fanny brought 314 acres on the slopes of Mount Vaea above the village of Apia. They called their estate Vailima, which is Samoan for Five Waters. With the help of Fanny’s son, they cleared 8 acres and built a small shack. In 1891, they began construction of a huge mansion that now stands as a museum of Stevenson’s life and work.

When the mansion was finished, it included a ballroom and the only fireplace in Samoa. Stevenson imported a grand piano, a sculpture given to him by Rodin, and a tablecloth that had been a gift from Queen Victoria, along with a good deal of European furniture.

The local Samoans believed that Stevenson was a man of great mana, since writing stories did not appear like work to them. In fact, he was interested in their language and stories and supported their independence from the Europeans. He was convinced that the administrators were all half-wits. He chose the native name Tusitala (Samoan for “Teller of Tales.”)

In December 1894, when Stevenson died of apoplexy (a brain hemorrhage or stroke) believed by the New York Times to have been brought on by the hot weather. (Wikipedia reports he was straining to open a bottle of wine.) Stevenson was either seated in the Great Hall of his mansion or on its veranda. Earlier that morning, he had been at work on a new novel called The Weir of Hermiston, something he believed was his masterwork. He was 44.

Locals built him a hardwood coffin and stood guard over his body through the night. The following day, 200 “sorrowful” Samoans cut the 1000-foot road to the grave, which they called the “Road of Loving Hearts.” Working in relays, they carried the coffin to the grave. Stevenson was buried just below the 1560-foot summit of Mount Vaea in a tomb overlooking Vailima and the ocean.

His epitaph came from his poem “Requiem.”  It reads:

Under the wide and starry sky,
Dig the grave and let me lie
Glad did I live an gladly die,
And I laid me down with a will

Fanny died in Santa Barbara, California in 1914. Her ashes were brought back to Vailima by her daughter and buried at the foot of Robert’s grave. Aolele, her Samoan name, appears on a bronze plaque.

Samoa’s head of state used Vailima as his residence until it was damaged by a hurricane in 1990 and again in 1991. Since then, it has been completely remodeled and returned to its appearance when the Stevensons lived there.

Samoa Travel Guide says a visit to Stevenson’s grave is “an almost obligatory pilgrimage.” Starting at the mansion, take the path over a small bridge, then turn left. A bit more than 1600 feet along, the trail splits. The right path is shorter and steeper, about 30 strenuous minutes. The less-used longer path takes around an hour. One of the sources suggests to take the shorter path up and come back the leisurely way.  Everyone agrees that the climb is most pleasant early in the morning or late afternoon. Take plenty of bug spray, water, and a picnic.

An unadorned photo of Stevenson’s grave

The Samoa Travel page for the Stevenson Museum

My connection to Robert Louis Stevenson

I'm the editor of Tales for the Camp Fire: An Anthology Benefiting Wildfire Relief. I'm also author of 199 Cemeteries to See Before You Die and Wish You Were Here: Adventures in Cemetery Travel, as well as a space opera trilogy. I'm co-author of a series about a succubus and her angel.
View all posts by Loren Rhoads →
This entry was posted in Cemetery of the Week and tagged Robert Louis Stevenson grave, Samoa cemetery. Bookmark the permalink.

7 Responses to Cemetery of the Week #113: Grave of Robert Louis Stevenson