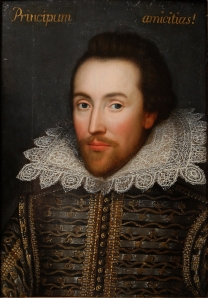 I encountered Shakespeare the first time by sheer luck.  The 11th grade English class was taking a bus trip to Stratford, Canada and had an extra ticket.  I was only in 10th grade, but my mom — a former English teacher herself — was friends with the 11th grade teacher.  I got to ride along to see Henry IV, part 2.

I rode along with the English trips the next couple of years.  They all concentrated on the history plays. The year I started college, a friend and I drove to Canada to see The Tempest.  It continues to be the most brilliant, transformative play I’ve ever seen.

After that, I took every Shakespeare class I could find.  I haven’t read every last plays, but I’ve read most of them, even the difficult ones.  I’ve seen every production I could, from Shakespeare in the Park to the movie adaptions to a spectacularly misguided production of Macbeth in Ann Arbor. 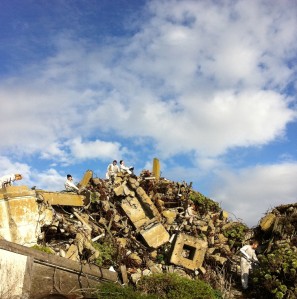 The We Players on Alcatraz during Hamlet’s grave digger scene.

A couple of years ago, I saw the We Players’ production of Hamlet on Alcatraz Island.  The company incorporated the crumbling prison into the play.  From a multitude of ghosts speaking as Hamlet’s father to the garbage pickers pawing through the rubble behind the gravediggers as Hamlet fondles Yorrick’s skull, death and dissolution wound all through the play.

This week’s Cemetery of the Week is going to honor the author of all these wonderful horror stories.

I'm the editor of Tales for the Camp Fire: An Anthology Benefiting Wildfire Relief. I'm also author of 199 Cemeteries to See Before You Die and Wish You Were Here: Adventures in Cemetery Travel, as well as a space opera trilogy. I'm co-author of a series about a succubus and her angel.
View all posts by Loren Rhoads →
This entry was posted in Cemetery essay and tagged Shakespeare. Bookmark the permalink.