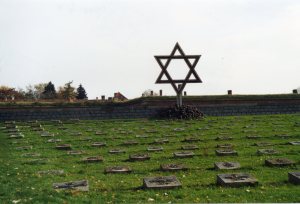 The Star of David over the graveyard at Terezin.

National Cemetery of Terezin
Národní Hrbitov v Terezíne
Terezin, Czech Republic
Dedicated: September 16, 1945
Number of graves: 2386
Number of interments: About 10,000. Only 1133 bodies buried here could be identified.
Open: The Small Fortress is open daily November to March from 8 a.m. to 4:30 p.m. and from April to October from 8 a.m. to 6 p.m.
Admission: A ticket to enter both the Ghetto Museum and Small Fortress costs 200Kc for adults, 150Kc for children. For more information or reservations for guided tours, call tel. 416-782-225 or go to the Terezin Memorial page.

About an hour outside of Prague stands Terezin, formerly a garrison town built by Emperor Joseph II in the 1790s. Gavrilo Princip was held at the Small Fortress after he assassinated Archduke Franz Ferdinand of Austria and his wife, setting off World War I. During World War II, the Nazis converted the town of Terezin — which they called Theresienstandt — into a Jewish ghetto. They used the nearby fortress as a concentration camp.

During the Nazi occupation of Czechoslovakia, the villagers of Terezin were evicted from their homes so that Hitler could turn the entire town into a Jewish ghetto. The Nazis called Terezin Hitler’s gift to the Jews, in an attempt to refute the world’s suspicion that Germany had Jewish blood on its hands. Jews from Czechoslovakia, Poland, Germany, France, and the Soviet Union were herded into the village, where the Gestapo demanded they “govern” themselves. The town council, elected by the Nazis, was forced to draw up lists—to fulfill Nazi quotas—of Jews to be sent over the border into Poland to Auschwitz-Birkenau.

In 1944, the Danish Red Cross visited the ghetto. They pronounced Theresienstadt a model for the care of political prisoners. As they toured, a jazz band (called The Ghetto Swingers) played a catchy tune. Shop windows displayed formal wear. Everyone ate at an outdoor cantina. Money filled the bank. Prisoners wore street clothes, rather than striped uniforms. Everyone had shoes and hats and overcoats. Behind the façade lay reality, which the Red Cross did not examine. Over 85% percent of the 140,000 people who passed through Terezin died. Three hundred inmates died each day from “natural causes.” Trains carried 87,000 people o Auschwitz-Birkenau. Barely 4,000 “citizens” of Terezin survived the war.

Coffins after the war, awaiting burial.

Down the road at the Little Fortress, conditions were even worse. Of the 32,000 people imprisoned in the Little Fortress during the war, 2500 died of their mistreatment. Another 5,000 were sent on to die in the extermination camps. After the Soviets liberated the rest in May 1945, 500 more former prisoners died of malnutrition and typhoid.

Inside the Little Fortress stands a tunnel that served as a mortuary, where corpses of tortured prisoners piled up until survivors could transport them to the nearby crematorium. During the last three years of the war, the crematorium’s four trolley-fed ovens burned night and day, disposing of 30,000 bodies from the Fortress, the ghetto, and Flossenbürg work camp over the border in Bavaria. We saw the wall where firing squads executed prisoners. 601 of their victims had been buried in shallow graves until after the war, when they were exhumed and reburied with ceremony outside the Fortress’s front gate.

After the war, all the graves were marked with little wooden crosses.

The Národní Hrbitov v Terezíne, the National Cemetery of Terezin, was designed to honor the memory of those who perished in the Holocaust. Immediately after the war, at the prodding of survivors, the vicinity of the prison was excavated to recover all the bodies. Gradually, between 1945 and 1958, some 10,000 victims from the Small Fortress, the ghetto of Terezin, and Flossenbürg work camp were reburied in the National Cemetery. Of those, fewer than 1200 lie in individual, named graves. The rest remain nameless. Perhaps one day genetic testing will discover who they were, if they have any relatives left with which to compare them.

A tall cross with a ring of barbed wire at the intersection of its arms towers above the graves. It was erected in 1992. In response, a smaller Star of David was raised closer to the prison wall in 1995. More poignant to me were the uncountable stones marked only by numbers of victims in the mass graves below my feet. Not even the years of death could be guessed or recorded. A low granite tablet with the number 10 000 remembered those who vanished into the crematorium.

From the Czech guidebook to the cemetery, a view of the graveyard from the road.

It’s possible to take a local bus out of Prague to Terezin and walk from the modern town back to the Small Fortress. That’s much cheaper than taking a guided tour, but I was so exhausted by the stories we heard on our tour that I was glad to collapse into our air-conditioned coach and not have to worry about getting myself back to Prague. Your mileage may vary.

Numbers of people buried in each section of the graveyard

A bus tour to Terezin

Trailer for the Oscar-nominated documentary, The Lady in Number Six: Music Saved My Life, about Alice Herz Sommer, the world’s oldest living survivor of the Holocaust, who died earlier this year.  She was interned in the ghetto at Terezin and survived by playing in the orchestra. The Nazis ordered them to play as the trains were being loaded to take people to the extermination camps.

Other Czech cemeteries on Cemetery Travel:

Cemetery of the Week #4: The Old Jewish Cemetery

Cemetery of the Week #38: the Bone Chapel of Kutná Hora

Cemetery of the Week #39: The New Jewish Cemetery

Cemetery of the Week #59: Vysehrad Cemetery

I'm co-author of a series about a succubus and her angel. Angelus Rose, the final book, came out in February 2020. I am the editor of Tales for the Camp Fire: An Anthology Benefiting Wildfire Relief. I'm also author of 199 Cemeteries to See Before You Die and Wish You Were Here: Adventures in Cemetery Travel--and a space opera trilogy.
View all posts by Loren Rhoads →
This entry was posted in Cemetery of the Week and tagged Czech cemeteries, Jewish cemetery, National Cemetery, Prague, Terezin Memorial, World War II cemetery. Bookmark the permalink.