Cemetery of the Week #129: the Graves of Jesse James 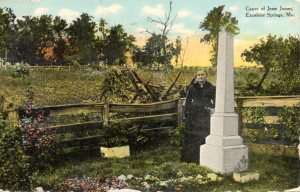 Jesse James was 16 when he followed his brother Frank into fighting the Civil War.  After their side lost, Jesse, Frank, and several other veterans spent 20 years robbing banks and trains and getting famous through dime novels.

On April 3, 1882, Jesse was shot dead by Robert Ford in his home in St. Joseph, Missouri (now a museum).  The surviving members of the gang, including his brother Frank, packed his body in ice and brought it back to his childhood home in Excelsior Springs (now called Kearney).  His mother Zerelda had Jesse buried near the house, where she could keep an eye on his body.  She feared grave robbers would dig him up and put his remains on display in a traveling show, as was common in those days.

Zerelda wasn’t above making a little money off her son’s notoriety.  She  sold rocks from his grave for 25 cents.  The postcard above shows a picture of her standing beside his obelisk.  The right sleeve of her dress covers the stump of her amputated hand, which she lost after Pinkerton detectives threw a turpentine flare into her home.

The Kansas City Star dates this card to 1907.  Apparently, there was a whole set of postcards featuring James’s homestead.  It also is a museum now.

The back of the photo reads, “Here is the picture of Hiram on Jesse James grave. My picture was no good so I did not get any of these. But this is a good resemblance of old Hi. And the old Tomb Stone also.”

After 20 years in the grave outside his mother’s farmhouse, Jesse James’s body was exhumed in 1902 and reburied in the family plot in Mt. Olivet Cemetery.  His wife Zee (short for Zerelda: she was a first cousin who had been named for his mother) had died in November 1900 and was already buried in the plot.  Jesse’s half brother Archie Payton Samuel is also buried there.  He was killed by the Pinkerton bomb that took Mother Zerelda’s hand.

Zerelda herself died in 1911 and was buried in the plot with her boys.

That tall marble tombstone has since been replaced by a government-issued military headstone.  It details the outfits with which Jesse fought in the Civil War.  A large granite marker, flush with the ground, names Jesse and Zerelda.

In 1995, forensic experts apparently proved that Jesse’s remains were in fact in his grave, so that all the men who claimed that Jesse had escaped and grown old peacefully were proved to be imposters.  Rest in Pieces: The Curious Fates of Famous Corpses gives a pretty good rundown of the exhumation and analysis.

A history of Kearney, Missouri

Things to do in Kearney, Missouri

A 1995 story about the exhumation of Jesse James, from the Chicago Tribune

A round-up of the Jesse James impostors

I'm co-author of a series about a succubus and her angel. Angelus Rose, the final book, came out in February 2020. I am the editor of Tales for the Camp Fire: An Anthology Benefiting Wildfire Relief. I'm also author of 199 Cemeteries to See Before You Die and Wish You Were Here: Adventures in Cemetery Travel--and a space opera trilogy.
View all posts by Loren Rhoads →
This entry was posted in Cemetery of the Week, Famous person's grave and tagged cenotaph, Missouri cemetery, museum. Bookmark the permalink.