Cemetery of the Week #131: Bonaventure Cemetery 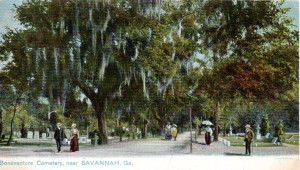 Promenading at Bonaventure. Vintage postcard with undivided back, pre-1907.

2017 Update:  the cemetery offers a free tour at 2 pm on the Saturday preceding the second Sunday of each month. (More information and the schedule are here.)  They also offer a smartphone app that replicates the tour. Of the $4.99 cost, $3.50 goes toward the restoration fund.  You can find out more about it here.

In Colonial-era Georgia, John Mullryne and his son-in-law Josiah Tattnall owned around 10,000 acres. Their holdings included 600 acres on St. Augustine Creek, three miles outside of Savannah. This is where they built the family plantation, which they called Bonaventure, or “good fortune” in French.

Unfortunately, both Mullryne and Tattnall were British loyalists and were banished during the Revolutionary War. During the Siege of Savannah, French and Haitian troops landed at Bonaventure, which overlooks a bend in the Wilmington River. The house was used as a hospital. Given the state of medicine at the time, it’s likely that Revolution-era soldiers were buried on the property. Their graves are no longer marked, if they ever were.

In 1782, Georgia nationalized the property of loyalists and Bonaventure was sold at auction. It took until 1788 for Josiah Tattnall Jr. to regain the plantation.

As most rural families did, the Mullrynes and Tattnalls set aside a small plot for a family burial ground. In 1802, Harriet Fenwick Tattnall was the first adult known to be interred there. The next year, Josiah was buried next to her. Of their nine children, six are buried nearby.

In 1846, the Tattnall family sold the plantation to a prominent Savannah hotelier named Wiltberger, with the provision that he would continue to care for the family plot. The following year, Wiltberger incorporated 70 acres as the Evergreen Cemetery of Bonaventure. Two years later, Wiltberger joined the Tattnalls as one of the first new permanent residents. 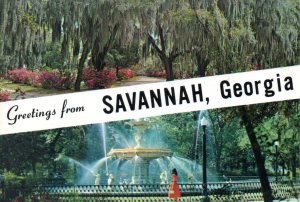 Modern postcard of Bonaventure Cemetery on top and Forsyth Park below

The City of Savannah website boasts, “This charming site has been a world-famous tourist destination for more than 150 years, due to the old tree-lined roadways, the many notable persons interred, the unique cemetery sculpture and architecture, and the folklore associated with the site and the people.”

In fact, John Muir camped in the cemetery in September 1867 and fell in love with the wildlife, birds, and the oaks draped with Spanish moss. The cemetery was, he wrote, “so beautiful that almost any sensible person would choose to dwell here with the dead.”

The city of Savannah bought the Evergreen Cemetery in 1907 and changed its name to Bonaventure Cemetery. It was placed on the National Registry of Historic Places in 2001. The American Resting Place reports that the garden cemetery is “considered by many to be the most beautiful and romantic in the entire South.” Marilyn Yalom, author of the book, says that the best time to visit Bonaventure Cemetery is at the end of March, when “you will be dazzled by the profusion of pink, red, and white azaleas.” 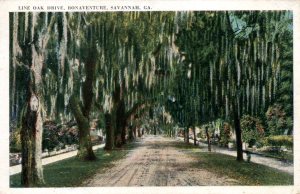 Confederate generals Claudius Charles Wilson and Hugh W. Mercer are buried here. Great grandson Johnny Mercer, who crooned “Moon River,” is also here, beside his mother who was murdered by his father when Johnny was a child. Their plot has a curved white marble bench inscribed with some of his song lyrics. Also here is Conrad Aiken, a poet who wrote more than 50 books, but may be best known for editing a collection of Emily Dickinson’s poetry and introducing her work to the world. His grave also has a bench, where poets can sit and have a drink.

The most widely known monument in Bonaventure was the Bird Girl, which was featured on the cover of the 1994 novel Midnight in the Garden of Good and Evil. It was one of a set of four bronze statues made by sculptor Sylvia Shaw Judson in 1936. The Trousdal family bought one of them to adorn their family plot. After the success of the novel, the statue drew so many visitors to the graveyard that tourists disturbed the adjacent graves. The stature was moved to the Telfair Museum of Art for its own protection. It’s on long-term loan from the family. John David “Jack” Leigh II, photographer of the iconic photograph, also rests in Bonaventure Cemetery.

The Bonaventure Historical Society strongly recommends a stop at the Visitors Center, located in the lobby of the Administration Building at the entrance to Bonaventure. There you can pick up a copy of their 16-page guide.

If you visit on the weekend of the second Sunday of the month, the Bonaventure Historical Society offers free walking tours, starting at the intersection of Mullryne and Wiltberger Ways. On that Saturday, guides leave at 2 p.m. On Sunday, guides will depart at 2, 2:30, and 3 p.m. A typical tour lasts about an hour. No reservations are necessary. They advise you to bring water and sunscreen.

City of Savannah site for Bonaventure, with maps and directions

Trip Advisor has more than 600 photographs of Bonaventure

More photos and some ghost stories

I'm co-author of a series about a succubus and her angel. Angelus Rose, the final book, came out in February 2020. I am the editor of Tales for the Camp Fire: An Anthology Benefiting Wildfire Relief. I'm also author of 199 Cemeteries to See Before You Die and Wish You Were Here: Adventures in Cemetery Travel--and a space opera trilogy.
View all posts by Loren Rhoads →
This entry was posted in Cemetery of the Week and tagged Bonaventure Cemetery, Civil War cemetery, Georgia cemetery, Savannah cemetery. Bookmark the permalink.

7 Responses to Cemetery of the Week #131: Bonaventure Cemetery