This is reblogged from the Western Legends Publishing blog, where it appeared almost two weeks ago.  I’ve been traveling and blogging from my phone was much more difficult than I expected.  This will be a new Cemetery of the Week tomorrow, though, so tune in again! 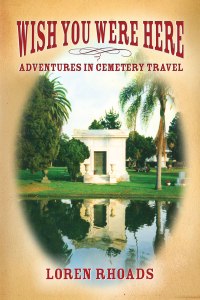 How did I pick all those cemeteries I visited in Wish You Were Here? That’s a funny story…

I visited the first cemetery by accident. I found a lovely book of cemetery photos — who knew such a thing existed? — in the bookshop at London’s Victoria Station. That was toward the end of our unexpected stay in England, but my husband Mason decided he would rather see beautiful, overgrown Highgate Cemetery than the Tower of London. It was the right choice.

We’d already planned to work Pere Lachaise Cemetery into our trip to Paris, because Jim Morrison, Oscar Wilde, Chopin, and so many other famous people were buried there. I’d found a cemetery guidebook (my first!) calledPermanent Parisians in the Rand McNally store in San Francisco. That book also led us to the cemeteries of Montparnasse and St. Vincent and the Paris Municipal Ossuary, but I wasn’t such a geek yet that we saw a single graveyard when we visited Amsterdam that same trip.

For a while after that, I simply stumbled on cemeteries. My mom saw the sign for the Pioneer Cemetery in Yosemite while I was looking for the anthropology museum. Jack London just happened to be buried at the State Historical Park that bears his name. A friend was touring St. Louis Cemetery in New Orleans and encouraged me to come along.

Other places had such an impact on history that I wanted to see them for myself. When Mason and I went to Japan for the first time, I wanted to go out of our way to see Hiroshima and the Peace Park. When my mom took me to Honolulu, I went alone by tour bus on Easter morning to see Pearl Harbor and the USS Arizona Memorial. I ducked out of a family trip to Washington DC to visit Arlington National Cemetery.

Then I started to get a reputation. Japanese friends took us to the old capitol of Kamakura to show me a monks’ graveyard. A friend who’d grown up in Westchester County said I shouldn’t miss the Old Dutch Burying Ground in Sleepy Hollow. Other friends gave us a private tour of the Soldiers National Cemetery and battlefield at Gettysburg.

By the time Mason and I went to Italy in 2001, we were building our vacations around cemeteries. In Rome, I targeted the Protestant Cemetery, final home of Keats and Shelley. In Venice, I wanted to see the island set aside as a graveyard, where Stravinsky is buried. Strangely enough, my goal in Florence was La Specola, the jaw-dropping medical museum — but we managed to score an hour alone in the English Cemetery, where Elizabeth Barrett Browning is buried. It had the most amazing iconography. Oh, and we discovered that the roads into the archaeological site at Pompeii are lined with tombs, although that story didn’t make it into Wish You Were Here.

Graveyards are everywhere you go. Next time you travel, take a look.

1 Response to Adventures in Cemetery Travel