Cemetery of the Week #135: Temple Emanu-El’s Home of Peace

A view in Home of Peace

As early as 1848, Jewish settlers in San Francisco set aside land bounded by Vallejo, Broadway, Franklin, and Gough Streets in the current Pacific Heights neighborhood (then on the edge of town) for a graveyard called the Emanuel Hart Cemetery. In the early days of the Gold Rush, if a Jewish miner died in the diggings, it was important that his friends send his body to San Francisco to be buried with other Jews.

Traders and merchants from Bavaria founded Congregation Temple Emanu-El in San Francisco in 1850. Many of the members had come west for the Gold Rush, but found the money was better if they served the burgeoning populace providing hats, boots, and clothing, as well as importing dry goods from relatives on the East Coast.

After the population exploded in the 1850s, the edges of the city of San Francisco encroached on the Jewish pioneers’ graveyard. The bodies of early Jewish settlers were exhumed in 1860 and moved to a new two-acre graveyard, called Home of Peace, near the old Mission. It was bounded by 18th and 19th Streets and Church and Dolores, where Dolores Park is now. Photographs of the era show a beautiful sloping cemetery full of bright white marble monuments. Historian Michael Svanevik said in City of Souls that this Home of Peace became “San Francisco’s most prestigious Hebrew burial ground.”

Whether due to the pressure of an ever-expanding population or to anti-Semitic vandalism (as Svanevik suggested in a lecture given at Cypress Lawn Cemetery in August 2001, the congregation of Temple Emanu-El began to look for a permanent burial ground. In 1888, Temple president Martin Heller arranged to buy 73 acres of land in northern San Mateo County from the Catholic Archbishop Patrick Riordan. The area would later become known as Colma.

As soon as the original deed of purchase was signed in 1887, bodies began to be moved from the Dolores Park cemetery to this new Home of Peace. All of the bodies and headstones were carefully moved. Each corpse was reburied in an individual grave, as opposed to the mass reburials in the Gentile graveyards. In all, an estimated 13,000 pioneers were reburied, although many of them no longer had markers. The original markers that did survive are still visible in the back of Home of Peace, where families were buried together whenever possible. The final body was reinterred in 1910 and the former cemetery land in San Francisco was sold for development. The city turned it into Dolores Park. 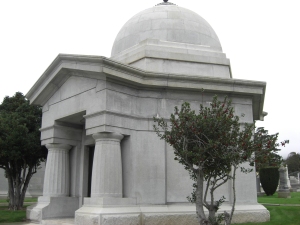 After he made his fortune selling rivet-strengthened blue denim trousers to the Forty-Niners, Levi Strauss built a beautiful white-domed tomb, valued at $48,000, in 1908. It features a bust of Fanny Stern, his mother, which is said to have been commissioned from Auguste Rodin.

San Francisco’s 21st mayor, philanthropist “Silver King” Adolph Sutro — who gave the city the Cliff House, Sutro Baths, Sutro Heights, and eucalyptus-covered Mount Sutro behind the University of California San Francisco campus on Parnassus — built a massive underground vault in Home of Peace for his estranged wife Leah and other members of his family. His ashes, as well as those of his daughter Emma were buried on the grounds of his home at Point Lobos, now called Sutro Heights Park. Judy Edmonson, General Manager of Home of Peace Cemetery, said in a tour in 2008 that Sutro’s ashes had recently been located during repair work on the Heights. The website Found SF reports that the urn full of ashes had been removed from the hillside and now resides with a family member. 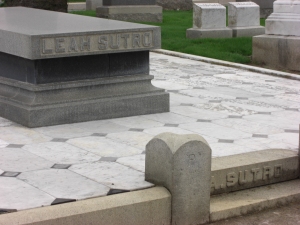 The grave of Adolph Sutro’s family

Other important San Franciscans buried in Home of Peace include Isais Wolf Hellman (one of the founders of Wells Fargo Bank), members of the Zellerbach family (of Crown Zellerbach Corporation, the second largest wood pulp and paper business in the world), Aaron Fleishhacker (who came out during the Gold Rush and found his fortune manufacturing boxes), Ignatz Steinhart (a philanthropist for whom the aquarium in Golden Gate Park is named), and Walter Wanger, a Hollywood movie director who started the careers of Rudolph Valentino, Claudette Colbert, Henry Fonda, Richard Burton, and Elizabeth Taylor. Alice B. Toklas’s parents are buried here, too.

The Home of Peace mausoleum opened in 1936, designed in the Byzantine Revival style by Wayne S. Hertzka (also buried there) and William E. Knowles. The mausoleum’s red-tiled dome, marble interior, and torpedo-globed chandeliers evoke Congregation Emanu-El’s temple at the corner of Lake Street and Arguello Boulevard in San Francisco, which had been inspired by the Hagia Sophia in Istanbul. The mausoleum and its chapel were remodeled by Mae and Benjamin H. Swig in the 1980s.

Home of Peace is “dedicated to serving all families of the Jewish faith.” One didn’t — and doesn’t — need to be a member of the congregation of Temple Emanu-El to be buried there. In fact, the graveyard provides burial sections for Congregation Beth Shalom, Peninsula Temple Sholom of Burlingame, and World War II veterans from the former Soviet Union.

Some of the cemetery’s un-landscaped area is used to grow organic produce for the San Francisco Food Bank. According to the Images of America book Jewish San Francisco, the Peah Garden donated 30,000 pounds of vegetables to the Food Bank in 2005, the largest contribution of fresh produce that year.

My review of Permanent Californians: An Illustrated Guide to the Cemeteries of California

My review of Images of America: Colma

Other Colma cemeteries on Cemetery Travel:

Hills of Eternity, which shares the entryway with Home of Peace in Colma.

I'm co-author of a series about a succubus and her angel. Angelus Rose, the final book, came out in February 2020. I am the editor of Tales for the Camp Fire: An Anthology Benefiting Wildfire Relief. I'm also author of 199 Cemeteries to See Before You Die and Wish You Were Here: Adventures in Cemetery Travel--and a space opera trilogy.
View all posts by Loren Rhoads →
This entry was posted in Cemetery of the Week, Famous person's grave and tagged Bay Area cemeteries, Colma cemetery, Home of Peace, Jewish cemetery, San Francisco cemetery, Temple Emanu-El. Bookmark the permalink.

3 Responses to Cemetery of the Week #135: Temple Emanu-El’s Home of Peace