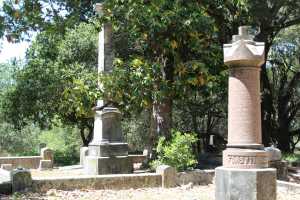 The first burial in the Santa Rosa Rural Cemetery was Thompson Mize, who had recently come to town via wagon train. He drowned in a puddle in a drunken stupor. With his death, the incipient town of Santa Rosa realized they needed a graveyard. Oliver Beaulieu offered a hilly spot far from the edge of town.

Thus founded in 1854, the Santa Rosa Rural Cemetery is the final home of whalers, brewers, cattlemen, and the brother-in-law of General Mariano Vallejo who donated land for the city plaza downtown. 250 veterans from the War of 1812, the Mexican-American War, the Civil War, both World Wars, and the Korean War rest here. 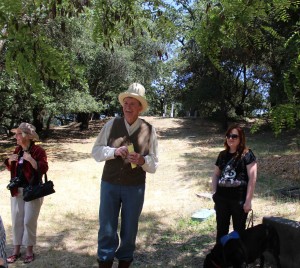 The cemetery grew organically for several years. In 1867, it was finally laid out formally, in the style of the “Rural Cemeteries” pioneered by Mount Auburn back east, and grave plots were sold by a cemetery board. Bill Montgomery, who served as docent of the tour I took last Saturday, believes Santa Rosa’s pioneer cemetery might be the first Rural Cemetery to bear the name in California. Antique rosebushes, Naked Lady iris, palm trees, and other plantings still survive from those early days.

The historic plaque just inside the cemetery’s Franklin Avenue gate says that the cemetery “holds the remains of over 5000 citizens hailing from all parts of the United States and various foreign countries.” That number may actually be closed to 5500, as many of the graves are now unmarked. At one point in the past, the city of Santa Rosa burned the brush on the hillside as a way to fight the overgrowth. The burning destroyed all but one of the old wooden grave markers.

Although the cemetery doesn’t boast any big names, it does contain some interesting stories:

Samuel West was a sharpshooter from Tennessee who marched down to New Orleans to fight for Andrew Jackson at Chalmette Plantation in the last major battle of the War of 1812. (In fact, the Battle of New Orleans was fought several weeks after the peace treaty had been signed in Belgium, but word hadn’t reached the combatants yet.) Armed with coon rifles, men from Tennessee caused 4,000 British casualties in the first day of fighting. West and his wife Phoebe came to Santa Rosa by wagon train in 1854 in their 50s. 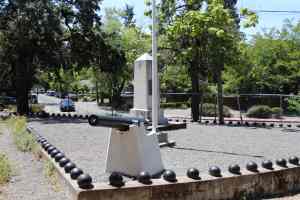 A plot near the Franklin gate remembers veterans of the Civil War. It is ringed with cannonballs and sports a Spanish American War cannon, but these are replacements. The original war surplus pieces were melted down as scrap metal during World War II. 188 Civil War veterans are buried throughout the cemetery. Most of them moved to Santa Rosa after the war.

One of those Civil War veterans is Sergeant Thomas Morton Goodman, sole survivor of the Centralia, Missouri Massacre. He and his men had been sent home on leave to Missouri. When the train they were traveling on arrived in Centralia, they found the tracks had been blocked by Bloody Bill Anderson. Anderson ordered the Union soldiers from the train, demanded their uniforms, then insisted the commanding officer step forward. When no one else volunteered, Goodman – not the only sergeant in the group – stepped up, expecting death. As he was led away in his underwear, all 26 remaining men were shot down on the train platform. Eventually, Goodman escaped his captors and lived to write his memoir. After he moved to Santa Rosa, he and his sons worked as blacksmiths.

In 1906, the great San Francisco earthquake leveled the unreinforced masonry buildings of Santa Rosa’s downtown. Because eight square blocks were knocked down, the town has the distinction of being the city most destroyed by an earthquake in US history. 35 victims of the earthquake are buried in the Rural Cemetery, including two paperboys who were crushed by a falling parapet when they rushed out of the Press Democrat office where they had been folding their papers for delivery. A plot with three monuments holds their graves and remembers other victims of the quake.

In 1920, the cemetery was the site of the last documented vigilante hanging in the Western United States. The hanging tree stood just inside the cemetery, but it was taken down soon after the event – but not before people had chipped away its bark and cut down the ropes as souvenirs.

In the 1930s, the Depression forced the cemetery into bankruptcy and it was all but abandoned. Eventually the city of Santa Rosa took responsibility for it in 1979, but matters didn’t really improve until the Santa Rosa Rural Cemetery Restoration Committee took over caring for it in 1994.

The Friends of the Santa Rosa Rural Cemetery recently celebrated 20 years of caring for this beautiful place. The city allocates $5000 a year for maintenance, but all other work in the cemetery is funded by donations or performed by volunteers. The group offers a variety of tours throughout the year.

On June 13, 2014 – Friday the 13th – the Friends are hosting their popular Darkside Tours, lantern-guided night tours which will cover “the murders, suicides, and other horrific events that took place in early Santa Rosa.” The tour, which raises funds for restoration of the cemetery, costs $25. Pre-registration is required.

PDF of the self-guided tour

Press Democrat story about the cemetery

Blog post with even more stories from the cemetery

I'm co-author of a series about a succubus and her angel. Angelus Rose, the final book, came out in February 2020. I am the editor of Tales for the Camp Fire: An Anthology Benefiting Wildfire Relief. I'm also author of 199 Cemeteries to See Before You Die and Wish You Were Here: Adventures in Cemetery Travel--and a space opera trilogy.
View all posts by Loren Rhoads →
This entry was posted in Cemetery of the Week and tagged Bay Area cemeteries, cemetery tours, pioneer cemeteries, San Francisco Bay Area, Santa Rosa cemeteries, Santa Rosa Rural Cemetery. Bookmark the permalink.

6 Responses to Cemetery of the Week #138: Santa Rosa Rural Cemetery