Chinko-ji Temple cemetery
aka Rokudo-san cemetery
aka Rokudochinnoji cemetery
595 Komatsu-cho, Higashiyama-ku, Kyoto 605-0811, Japan
Telephone: +81 75 343 6555
Founded: 836 AD
Size: a fraction of an acre
Number of interments: hard to say, since Japanese are cremated and their ashes interred beneath their headstones marked with only their family names
Gates are open: 9 a.m. to 4 p.m. The buildings open only occasionally. Check with the Tourist Information Center downtown for opening hours if you want to see the paintings of Hell and the Spirit World.
Admission: free
Important to know: The mosquitos in June were fierce, even in the heat of the afternoon. You may want to invest in insect repellent before you visit.

The city of Kyoto was founded in 794. For centuries, it served as the capital of Japan, until the emperor moved his court to Tokyo in 1869. It’s been called the City of Ten Thousand Shrines, but may only have as many as 2000 of them, 1600 of which are Buddhist temples along with 400 shrines dedicated to Shinto, the native religion.

Kyoto’s largest festival of the year takes place in August, when the city observes the Bon Festival, the Japanese celebration of ancestral spirits.

The book Introducing Kyoto by Herbert E. Pluschow reports “The Bon Festival begins on August 8 with a visit to Chinko-ji Temple. The location of Chinko-ji (also called Rokudo-san) marks one of the largest grave areas that existed since Heian times. Formerly, it extended from Kiyomizu-dera Temple all the way downhill to Rokuharamitsu-ji Temple and as far north as Chion-in.” Kyoto, a Cultural Guide, adds, “This area was known as ‘the land of the dead,’ a place where the bodies of those who died without family were often abandoned.”

So perhaps there were no monuments to move, no graves to disturb. The area is suburban now, full of houses. Of the massive graveyard, only a fragment remains at Chinko-ji.

The small Buddhist temple of Chinko-ji (also known as Rokudo-san) stands in the Higashiyama neighborhood, just south of Kyoto’s Gion neighborhood. The temple dates to the 9th century. As far as I can tell, the graveyard does not date that far back.

The plaque at the gate says, “A Rinzai-sect temple of the Kenniji school, founded in 836, and commonly known as Rokudo-san. Kyōto’s Bon Festival, Buddhist observance honoring the spirits of ancestors, begins with the tolling of the temple bell. The area is called ‘Rokudo-no-tsujii,’ or ‘the place where this world and the other world meet.’ Reference to this belief appears in Konjaku Monogatari, Tales of Times Now Past. The well behind the Main Hall was believed to have been used by Ono no Takamura (802–852) to commute between the two worlds.”

In fact, the temple still has a statue of Chinese scholar Ono no Takamura, a calligrapher and poet who served Emperor Saga in the early part of the ninth century. Takamura was so eloquent in his descriptions of Hell that it was believed he was an emissary from Enma, the King of Hell. Legend holds that at night Takamura would climb into the well at Rokudo Chinkoji, descend to the underworld, and help Enma judge the dead. In the morning, he’d climb back out, then go serve the Emperor.

Chinko-ji remains a place to pray for “the souls of commoners.” Rokudo-san, the temple’s popular name, refers to the roads to the six Buddhist realms to which a soul may go: 1) Jigoku (Hell), 2) Gaki (the land of the hungry spirits), 3) Chikushou (the land of the beasts), 4) Shura (the land of fighting), 5) Ningen (the land of humans, or our world), and 6) Tenjo (Heaven). Rokudo no Tsuji (the intersection of this world and the next ones, where the six roads begin) is believed to be in the small open square inside the tori gate from the street.

Japanese Buddhists believe that the souls of the dead inhabit mountains, which were Paradise. The bottoms of valleys were Hell. The mountain above Chinko-ji is called Mt. Amida, the Buddha of eternal light who rules Paradise. Some souls were so weighed down that they couldn’t climb uphill and were condemned to roam the earth, causing suffering. The Bon Festival addresses itself to these unhappy souls, which are welcomed back to earth at temples considered gates of Hell.

The welcoming bell is inside this building.

At Chinko-ji, people welcome their ancestors back by ringing the temple’s bell, called “Mukae-gane” or the welcoming bell. Unlike most temple bells in Japan, where you draw the clapper back to strike the bell, this one requires you to push the clapper forward. Legend says that the bell can be heard in every corner of hell and was once heard as far as China.

The building housing the bell stands on the right side of the temple complex. Just past in stands a hall with a statue of Enma and his emmisaries.

Straight ahead from the gate, on the north side, stands the main hall of the temple, which houses a statue of the Buddha Yakushi, who has the ability to rescue the suffering from Hell. 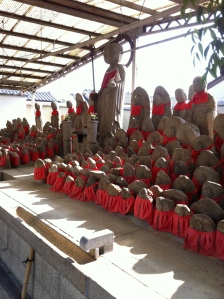 Some of the Jizo

The well that Takamura used to visit Hell still exists behind one of the temple buildings, but it was closed the afternoon when I visited. During Bon, people used to buy pine branches from the temple and lower them down into the well, so that the souls of the dead could grab on.

On the western side of the shrine, a plastic roof shelters a large statue of Jizo, the Buddhist guardian of travelers, children, and the dead. He’s surrounded by 200 smaller Jizo.

Behind the Jizo shrine stands the pocket graveyard. I didn’t open the gate and walk in, even though my family was alone at the temple when we visited. It didn’t feel respectful and I could see as much as I needed from the gate. 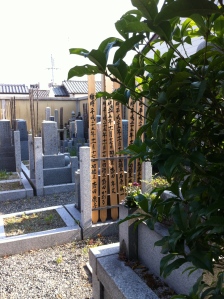 However, as I stopped to pay my respects to Jizo and take some photos, the sotōba – the wooden blades marked with the posthumous names of the dead – rattled like chattering teeth in a sudden breath of wind.

I was glad when other people came into the temple grounds with us.

A photo tour of the temple

A Japanese page for the temple, with a map

A photo and more information about the Welcoming Bell

A haiku about the Welcoming Bell

A video of the temple at O-Bon:

I'm co-author of a series about a succubus and her angel. Angelus Rose, the final book, came out in February 2020. I am the editor of Tales for the Camp Fire: An Anthology Benefiting Wildfire Relief. I'm also author of 199 Cemeteries to See Before You Die and Wish You Were Here: Adventures in Cemetery Travel--and a space opera trilogy.
View all posts by Loren Rhoads →
This entry was posted in Cemetery of the Week and tagged Bon Festival, Buddhist temple, Chinko-ji Temple, Higashiyama-ku, Japan cemetery, Japanese cemetery, Kyoto, Kyoto cemetery, Kyoto Japan, Ono no Takamura, Rokudo-san, Rukodochinnoji. Bookmark the permalink.

5 Responses to Cemetery of the Week #142: Chinko-ji Temple cemetery