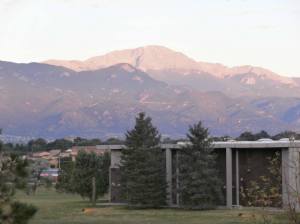 Given my penchant for the dramatic and my adoration for monument architecture, you might guess my most memorable cemetery would be one with gothic iron gates and angel statuary. While I enjoy visiting the Chapel of Chimes in Oakland, where the urns are shaped like books, and the Mountain View Cemetery next door, which features mausoleums dating back to 1863, the cemetery that speaks to me most is nothing like that.

Memorial Gardens Cemetery, located in Colorado Springs, is one of those boring graveyards you drive by without a thought of visiting. With a large mausoleum building circa 1960s, the rest of the property is just lawn with embedded gravemarkers in the meticulously manicured greenery. It’s dwarfed by the massive Rockies in the distance and often forgotten by cemetery enthusiasts looking for the more exciting history of Crystal Valley Cemetery near Miramont Castle in Manitou Springs, just twenty minutes away.

While my family most often remembers Memorial Gardens with a laugh because of an unfortunate event involving the sprinklers and Gram getting water in the face through an open car window (sorry, Gram!), for me it is much more. My connection with the marble slabs cannot be denied, even while living several states away.

Memorial Gardens was my first connection with a place for the dead. My grandmother used to take me to her parents’ graves when I was little. I didn’t really understand what power the place held for her. I didn’t grasp the severity meant by those names written on the ground. She would shed a tear, leave some flowers, and then we’d go to lunch at her favorite restaurant. It was a momentous occasion, but I didn’t really know why.

In the winter of 1990/1991, I was seventeen. My mother and I visited my grandparents in Colorado and were told my grandfather was very ill. Grandpa Emerson was my favorite person in the world. He was my father figure, since I didn’t know my real dad. Grandpa embodied everything I thought was right in the world. Born as the smaller of twins, he weighed 2.5 pounds when they carried him home in a shoebox — in which they said he could be buried, if he didn’t survive. But Grandpa went on to have a family of five, with tons of grandchildren and great grandchildren. He helped weaker children, animals, and people throughout his life and always took care of those who might be too weak to care for themselves. Some of my fondest memories of him were when he cared for runt puppies or kittens that their mothers had rejected. He spent hours nursing the wee one, feeding it with an eye dropper and speaking to it as if it were his own child. His affection for small, weak things fell on me, I suppose. I was a preemie and the daughter of his youngest. I cannot claim to have the strongest connection to him, for he touched so many of us with his kindness and good nature, but on my part, I felt he was the most important person in the world.

Grandpa died that winter, despite all our efforts to care for him. His heart finally gave in and left us to suffer his loss. My world ground to halt as I experienced true heartache for the first time. How could I go on without him?

The day Grandpa was buried, the wind blew ever-changing clouds overhead. I was sure it would snow. The ride to the cemetery was surreal. I had seen his still form in the coffin, his flat white hair that was usually fluffy, and his bright blue eyes behind closed lids. I knew he would not wake, yet I still thought he’d hold my hand as they lowered the casket. My mother and grandmother took solace in the figure of Jesus that could be seen on Pike’s Peak when it snowed. For me, I didn’t want God to have him. He was my grandfather, my gift that was taken away. 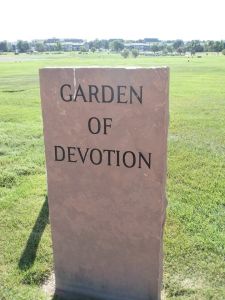 The overcast cemetery was one I’d been to many times with Grandma, but this time it took on a more meaningful presence in my mind. The one I loved would be buried in that pungent soil, not too far from Grandma’s parents. I had never really known the grief that surrounded Grandma in those visits to her parents’ grave. Suddenly, the tranquil lawns of Memorial Gardens were a welcomed sight. No more did I view them as a waste of time or a boring trip with Grandma, the only highlight of which was the lunch afterwards. Now this place held my loved one and would later claim my grandmother as well. Before, I saw cemeteries as a place others went as an obligation, or to witness the works of talented sculptors. From that moment on, it became a sacred holding place, cradling the bodies of ones I love and that would someday cradle me.

Memorial Gardens has become a member of the family, sharing in our grief and love. It has a soul of its own, I believe, and reminds me of my grandfather. Not only because he’s buried there, but because like him, it takes care of those who can no longer care for themselves. 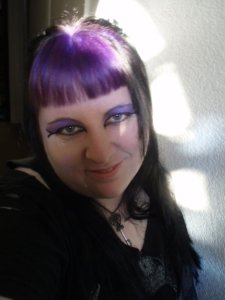 Emerian Rich is the author of the vampire book series, Night’s Knights. Her novel Artistic License is the tale of a woman who inherits a house where anything she paints on the walls comes alive. Emerian has been published in a handful of anthologies by publishers such as Dragon Moon Press, Hidden Thoughts Press, Hazardous Press, and White Wolf Press. She is a podcast horror hostess for HorrorAddicts.net, an international acclaimed podcast. To find out more, go to emzbox.com or follow her on Twitter: emzbox or Facebook: emzbox.

For the next year, I’m planning to put a cemetery essay up every Friday.  If there is a cemetery that has touched your life, I would love to hear from you.  The submissions guidelines are here.

I'm co-author of a series about a succubus and her angel. Angelus Rose, the final book, came out in February 2020. I am the editor of Tales for the Camp Fire: An Anthology Benefiting Wildfire Relief. I'm also author of 199 Cemeteries to See Before You Die and Wish You Were Here: Adventures in Cemetery Travel--and a space opera trilogy.
View all posts by Loren Rhoads →
This entry was posted in Cemetery essay, Death's Garden Revisited and tagged Colorado cemetery, Emerian Rich, Memorial Gardens Cemetery. Bookmark the permalink.