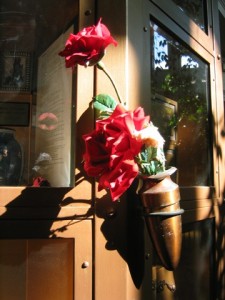 Rozz’s niche at Hollywood Forever as photographed by Mason Jones.

It began when I decided: fuck it, I’m going somewhere special for my 30th birthday.

Café La Bohème was a fine-dining establishment that had gotten a rep around the Los Angeles travel boards as “the goth restaurant.” I’d been curious about it for a while and, really, what better time to go? Since I live in San Francisco, it mandated a road trip southward, so we’d just have to spend the weekend. Hello, Route 5!

“We’re going to L.A.” I announced to my other half and began planning an itinerary: Forest Lawn, Trashy Lingerie, Venice Beach, Canter’s, Melrose of course. We hit the club listings and saw that Frankenstein would be playing with The Deep Eynde and The Coffin Draggers on Saturday night. Perfect! I sketched out a tentative schedule, but other than a nice dinner, didn’t have anything planned for Sunday, my birthday. I figured it would resolve itself along the way.

Our internet hotel deal landed us in a Beverly Hills three-star a few streets away from Rodeo Drive, which was a most amusing place to emerge covered in torn fishnet, heading to some bar in the middle of nowhere for a night of good deathrock. Truly, it seemed to me, there were few better ways to spend the last night of my 20s than watching a bunch of cranky old punks in ghoulface. Why be afraid of aging when there’s a whole beautiful scene that gleefully paints itself up like living corpses? You can’t get any older than dead.

Eros and Psyche in Hollywood Forever. Photo by Loren Rhoads.

After a couple of drinks and watching The Deep Eynde transcend the ’70s-era wood-paneled stage ambiance, we noticed a vendor table and went to investigate. Pins! Little death pins! And lots of them. While I picked out a handful for my jacket, the guy behind the table taunted me: “Why don’t you have any pins on your jacket! He’s got pins on his jacket!” That made me smile, because I put them all over my other half’s lapels earlier over lunch at Duke’s.

After our purchase, the vendor handed us each a free pin. He refused to sell those particular ones during April: an image of Rozz Williams. We looked at each other: yeah, that’s right, this is around when it happened. Everything fell into place: we’d spend my birthday paying a visit to Rozz.

Hollywood Forever sits on Santa Monica Boulevard, amidst the bustle of discount clothing stores, burrito joints, impatient traffic. Daily life whirls on all around it, but when you pass through the gates, it provides an impressive pocket of peace and quiet. We pulled in and made the assumption that Rozz was in the cemetery and — judging from the size of the place — we would need a map to find him. So off to the gift shop it was. The souvenir map was scattered with stars for all the celebrities buried within. It turned out that Rozz was in the columbarium. I’d been told that the one in S.F. was an intriguing place to visit, but I still hadn’t made it yet, so this was my first time to see how cremated remains were laid to rest.

The first room in the building was a chapel, with a box of tissues considerately placed at the end of each pew. Behind this we entered the columbarium proper. The place was like nothing I’d ever seen before — it had the gilded elegance of a department store, the hush and order of a library, with a large fountain splashing away in the center, and golden afternoon light spilling down from overhead. The walls and pillars were inlaid with hundreds of little windows. Wondrous. We circled the perimeter of the room, gazing into the boxes. The first floor had a more somber tone, with what looked like books inscribed with the names of the deceased. Things got more interesting on the second floor, where we’d been directed to find Rozz.

Many of the cases were still empty — Hollywood Forever’s website touts the columbarium as a unique yet cost-effective place of remembrance, but it looks like it’s still in the midst of catching on. That made the few occupied boxes stand out and catch our attention, with their urns and photos and mementos nestled in soft beds of velvet and satin. The first case I saw contained a photograph of a glamorous blonde, caught in a sunlit smile. A small poster of a pulp flick she’d starred in stood alongside a Seraphim Classics angel figurine, her business card, and headshots of all the various looks she could pull off. It looked like she’d quite enjoyed playing the vamp. A necklace curled in a corner. Taped to the glass was a card left by a visitor. Going from the indie film credit and her obvious love for dress-up, I couldn’t help but smile back at this complete stranger: this was someone after my own heart. 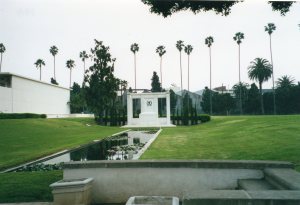 A few cases down, an officer’s cap was surrounded by press clippings and photographs of a gorgeous Asian pinup girl and her military paramour clinking champagne glasses, somewhere in the middle of the past century. Across the room, a man sporting a DA ’do was captured in the midst of a fierce dance step before a band, eyes closed and every nerve alive. His ashes were kept in a box covered with vibrant tattoo art.

Every so often, we’d run across a cherub statue perched atop a luxurious drape of fabric, with a discreet advertisement for the columbarium’s memorial options.

I walked around the room, enamored by each tiny stage: so much like my altar at home, with all the treasures I’ve accumulated over time, each representing a different facet of my spirit. These little shrines seemed so warm and intimate, infused with such a flavor of personality, compared to the cold stone slabs outside, marked with only names and years or maybe some lovely but generic statuary, not much else beyond a lump of marble to tell you about the person resting there.

We found Rozz in a pillar next to the staircase. His ashes were in a ceramic urn, flanked by a dead rose and a handwritten note. There were faint lipstick traces on the glass where someone had kissed him goodbye, along with fingerprints tracing out the Christian Death symbol, a X transposed over a cross. In reading the note, I cursed not having a pen. There were a couple of lines I wanted to remember, which I paraphrase here:

I erect a burning temple in my heart, to house such treasures as these
A thousand starlit memories to comfort me in my hours of need…

Outside the case, there was a sconce to the right, inside which curled a zine bearing Galaxxy Chamber’s contact info. I badly wanted to pull it down and read it, but decorum prevented me. On the floor lay a small stack of flyers for some band’s Rozz Williams tribute night, along with their CD and two dozen roses. Initially, I was put off that someone was using a grave as a place to promote their night — some people never quit — but later thought about how I wouldn’t mind my resting place being used as a crossroads of sorts, a place for the living to connect with each other. Still involved in the community after my death: I wouldn’t mind that at all.

We spent a lot more time at Hollywood Forever than anticipated. We walked out of the columbarium and lingered over the rest of the grounds, exploring with our map. Brushed dirt from Jayne Mansfield’s elegant cenotaph. Frowned on the impersonal, filing-cabinet layout of the mausoleum in the back. Grinned at Mel Blanc’s “That’s all, folks!” written across his tombstone.

We mused on the things we’d put in our own display cases. A few weeks before, an online quiz made the rounds among my LiveJournal friends and was one of the rare few I’d participated in. Unlike the kazillion “What kind of meatloaf are you?” personality tests, this one asked you to name 12 things you’d put in a box to tell someone about yourself. I’d included a bottle of theatrical blood, a silver pentacle, a Skinny Puppy cassette, a sprig of white sage, a pair of kitty ears. It seemed an eerie foreshadowing of today’s visit, since all those windows asked me this same question on a much more permanent level: what would I leave behind to tell the world what my life was about? What will define me when I’m gone? Walking past the graves back to the car, I thought about how the first three decades of my life were over and how much more I want to do. That how I decided to spend the time ahead of me was what would ultimately end up behind that glass. Forever.

Dinner that night at La Bohème was absolutely sublime.

Lilah Wild’s dark fiction is an ongoing search for hidden cauldrons within the modern landscape, exploring the contemporary fantastic and horrific. She is a graduate of Clarion West and a member of NYC-based writing group Altered Fluid. Her work has appeared in Pseudopod, Spinetinglers, Not One of Us, Dark Tales from Elder Regions: New York, Niteblade, and other venues of quality scrawl. When she’s not elucidating on Old Hollywood screen goddesses or the blood and fire quotient of metal videos that purport to be evil, Lilah can be found dabbling in tribal fusion bellydancing, hiking the deco puzzlebox of Manhattan, or running away to the beach. She lives in Queens amid a clamor of doom metal noodling and four cats.

For the next year, I’m planning to put a cemetery essay up every Friday. If there is a cemetery that has touched your life, I would love to hear from you, particularly if there is one you visited on vacation. The submissions guidelines are here.

I'm co-author of a series about a succubus and her angel. Angelus Rose, the final book, came out in February 2020. I am the editor of Tales for the Camp Fire: An Anthology Benefiting Wildfire Relief. I'm also author of 199 Cemeteries to See Before You Die and Wish You Were Here: Adventures in Cemetery Travel--and a space opera trilogy.
View all posts by Loren Rhoads →
This entry was posted in Cemetery essay, Death's Garden Revisited and tagged columbarium, Hollywood Forever, LIlah Wild, Morbid Curiosity magazine, Rozz Williams grave. Bookmark the permalink.