Death’s Garden: Muzak for the Dead 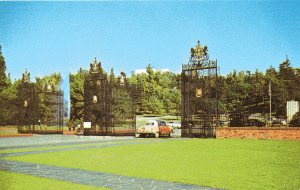 Cemeteries have never been scary places to me, despite my penchant for movies where corpses claw out of their coffins and munch on human flesh. The first time I saw George Romero’s Night of the Living Dead, it scared the hell out of me, especially the first scene in the old graveyard. Even so, it has always amazed me that some people are actually afraid to visit cemeteries. I suppose, if I was in Forest Lawn and rotted hands started poking out of the ground, I might change my mind. Until then, cemeteries are mildly fascinating places to stroll with my husband.

When I was no more than five years old, my family visited a cousin’s grave after he’d been killed in Vietnam. He was buried in a military cemetery at Point Loma, out above the ocean. I remember standing around the flat white rectangular marker with my mom, dad, sister, and grandmother. Thousands of identical markers dotted a sea of green grass, which spread around us as far as I could see. I had to go to the bathroom really badly and couldn’t understand exactly why we had to stare at this white slab on the ground. I didn’t remember my cousin. The concept of death was not within my grasp at that age. There were no bathrooms in sight. 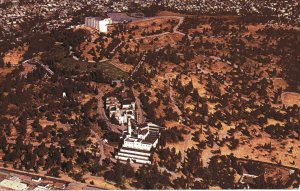 Vintage postcard of Forest Lawn from the air.

I prefer old-style cemeteries, the ones with crumbling tombstones and old mausoleums. Unfortunately, my current hometown of Los Angels is the land of McCemeteries: Forest Lawn, the chain of full-service mortuary/cemeteries. One-stop shopping for all your burial needs. “One call takes care of everything” comforts the sign above the gates. Forest Lawn Glendale is a veritable theme park of the dead, complete with museums (filled with interesting armor, old coins, etc., but very little to do with death. I guess too much death-oriented stuff would depress the tourists.), gift shops (where you can buy postcards and religious kitsch – how about an ashtray with Jesus on it?), gardens, a lake with resident swans…and bathrooms.

Another amenity of Forest Lawn Glendale is piped-in music in parts of the cemetery, such as the Garden of Everlasting Peace and the Garden of Eternal Freedom. It’s really bad music, sort of Muzak for the dead. I wonder if the management thinks the music soothes those visiting their dead friends or if it is a holdover of the superstition of not disturbing the dead. I personally can’t imagine a worse fate than lying in a box, forced to listen to elevator music for the rest of eternity. It would send me clawing out of my grave just to change the tunes. I would be much happier, and more likely to stay put, if there was some lively music to listen to, maybe some activity going on around me. This is assuming, of course, that my “self” or “soul” or whatever is still sentient.

Our house is a half-hour walk from Forest Lawn Glendale, which provides at least another hour of exercise to cross. My husband and I recently walked over, stopping for coffee and chocolate croissants along the way. We hiked past the tacky “European” sculptures, up to the Garden of Everlasting Peace to visit Errol Flynn’s grave. Settling on a bench, we toasted Errol with coffee. (Alas, we had no whiskey.) 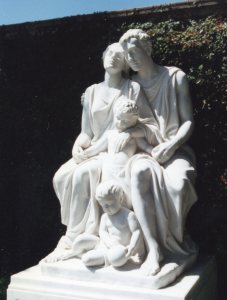 As we ate breakfast, we were spotted by a security guard. He told us amiably that eating wasn’t allowed in the cemetery, but he’d look the other way if we didn’t leave a mess. He added that “some people” got really upset when they saw folks with food around the graves, so we should “keep a low profile.” He wandered off, leaving us to speculate what about eating would offend people. I mean, I could see a problem if we had a food fight over someone’s dead relative or made orgasmic noises, but otherwise, what’s the big deal? I suppose that the dead might possibly get pissed off that we’re up top enjoying life while they’re stuck in caskets, but it seems ridiculous that such a basic function of life should offend anyone, dead or living. Maybe it comes from the same train of thought that inspires epitaphs like “God Grant That He Lie Still”: the fear that the dead won’t stay dead. As much as people miss their loved ones, who wants ’em back after they’ve been rotting in the ground for a few years?

I’d rather not be buried in a place like Forest Lawn. I definitely don’t want my funeral held at any mortuary that serves up an impersonal eulogy by a Rent-o-Minister babbling on about life and death, children and rebirth, how the newly deceased will be “walking the fields of Heaven” and rejoicing in the glory of the afterlife. In short, nothing that relates to the actual deceased at all.

My grandma’s funeral was that impersonal. It was held a couple of weeks ago at Greenwood Mortuary in San Diego. My sister and I drove down to attend. The eulogy was so generalized that, for me, it actually lessened the grief. I don’t know who the minister was talking about, but it was certainly not my Grandma. At one point, he said something like, “The first thing she’ll do upon entering the Gates of Heaven will be to look for her husband and gently call his name.” My immediate thought was “Nonsense!” The first thing Grandma would do would be to yell, “REX!” for her psychotic terrier – who certainly shouldn’t have been admitted through the Pearly Gates in the first place – in a strident Bronx accent. Then, maybe, she’d check around for Grandpa. I almost committed the unforgivable sin of laughing when that popped into my mind.

The final touch of impersonality was added by one of our uncles, a landscape artist, when we put flowers on Grandma and Grandpa’s graves. Everyone had a single carnation (compliments of the house), which we placed on the headstones. After we’d all finished, our uncle rearranged the flowers to suit his idea of what looked “right.” That act trivialized our sentiment and simultaneously underlined the tone of the whole funeral.

The Irish have the right idea: a loud, rowdy wake where they celebrate living, not dying, where people get smashed and tell their favorite stories about the deceased. (“Ah, he was a real bastard, but I loved him, so help me, God!”) My husband and I talked about having our ashes forged into sword hilts, with the requisite curse placed on the sword, naturally, to prevent theft. This way, we’ll be around our family, passed down through generations and, hopefully, remembered. I don’t want to lie beneath another weathered headstone in a cemetery, with flowers replaced once a month until there’s no one left to remember me.

Forest Lawn is a great place to visit, but I wouldn’t want to be dead there.

***
This essay appeared in the original Death’s Garden: Relationships with Cemeteries, published by Automatism Press in 1996. Reprinted here with permission.

Dana Fredsti is an ex B-movie actress with a background in theatrical combat (a skill she utilized in Army of Darkness as a sword-fighting Deadite and fight captain). Through seven plus years of volunteering at EFBC/FCC, Dana’s been kissed by tigers and had her thumb sucked by an ocelot with nursing issues. She’s addicted to bad movies and any book or film, good or bad, which includes zombies. She’s the author of the Ashley Parker series, touted as Buffy meets The Walking Dead, and the zombie noir novella, A Man’s Gotta Eat What a Man’s Gotta Eat.

For the next year, I’m planning to put a cemetery essay up every Friday. If there is a cemetery that has touched your life, I would love to hear from you, particularly if there is one you visited on vacation — or if you got married or did anything else unusual in one. The submissions guidelines are here.

I'm the editor of Tales for the Camp Fire: An Anthology Benefiting Wildfire Relief. I'm also author of 199 Cemeteries to See Before You Die and Wish You Were Here: Adventures in Cemetery Travel, as well as a space opera trilogy. I'm co-author of a series about a succubus and her angel.
View all posts by Loren Rhoads →
This entry was posted in Cemetery essay, Death's Garden Revisited and tagged California cemeteries, Deaths Garden, Forest Lawn, Los Angeles cemetery. Bookmark the permalink.

4 Responses to Death’s Garden: Muzak for the Dead