How the Forgotten Angels Saved My Life 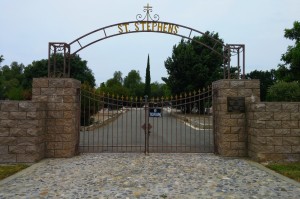 I’ll be the first one to admit that in my twenties, I was lost. I had just graduated from college. During the first recession in my adult life, I lost all three design jobs I held. With little experience, I was at the bottom of the totem pole and the first to go. Heavily in debt with school loans, I had to take whatever job I could get, which landed me in a depressing job at an answering service. The company was located in a small house with shoddy equipment. The employees were constantly sick. I found no joy in answering 300-plus phone calls a day. The other employees were just as miserable. It was like we’d drawn the short straws and ended up in call center purgatory. The worst part was that we felt like we had no way out.

I plummeted into a dark depression. It felt hopeless and dangerous and all too real. To make myself happier, I decided to take joy in beautiful things. I turned to architecture, statuary, and cemeteries, which held a special interest because not only were they beautiful, but they had a sort of quiet melancholy that matched my soul.

On one of my treks, I found St. Stephen’s Cemetery. It’s a tiny cemetery in Concord, California, where the graves have fallen into disrepair. In the early Nineties, it was basically a hangout for kids to drink in and homeless to sleep in. It became my getaway every time I felt sad.

I discovered a whole section with stillborn or baby graves. This section was especially rough: the headstones vandalized, the little metal markers broken off and scattered. I wondered why the families didn’t visit, but the dates on the graves were from the 40s and 50s, so I assumed the parents were long gone.

I realized I found this part of the cemetery for a reason. I was looking for purpose and I found one. Me and a couple friends packed up a broom, some garbage bags, a few dozen roses, and cleaned up the baby graves. We disposed of all the beer bottles and trash left there by insensitive partiers. We placed the disassembled metal markers where we thought they went and made sure all of the broken tombstones were placed near the graves they belonged to.

As time wore on, some of my friends stopped coming with me because they were a little spooked out. I didn’t understand why people didn’t care about these poor babies. I began affectionately calling them Forgotten Angels.

As the months went by, I would visit the Forgotten Angels weekly. Slowly, through mourning these lost souls and knowing that they were now in a better place, I began to come out of my depression. Still, I felt an obligation to these dead babies. Friends would say, “Oh yeah, that sucks,” but they didn’t really understand. How could they? These little bodies buried under the dry, fruitless dirt had helped me conquer a depression so deep, it was something only I could fathom.

Although I did (and still do) enjoy visiting cemeteries, this one in particular eventually became a burden to me. It reminded me of a time when I was depressed, when I clung to my visits like a security blanket. Those of you who’ve been in a deep depression know there’s a time when you’ve finally crawled out and need to do away with things that remind you of what a deep, dark pit you were in. I felt selfish and guilty for wanting to stop visiting, but I also knew my mental health wouldn’t improve if I kept fixating on something that reminded me of being depressed.

So, on a cold winter afternoon, I decided to say my farewell to the babies. I brought fresh pastel pink and orange roses. I cannot tell you the guilt I felt in leaving the babies there. After I left, who would take care of them? Who would even care that they were once alive? I sat for a while, talking to the babies and letting them know that, while I still cared about them, I couldn’t come anymore, for my own sake.

A giant tree stood above the graves. As I sat there, the wind picked up, as it always did in that part of the cemetery. I wrapped my arms around myself, thinking I should’ve brought a warmer coat. I cried. I don’t think it was really because I was leaving the babies. After all, they were dead and gone and there was nothing really I could do for them. I think I was crying because that portion of my life was coming to an end. The babies had helped me get through it and I had no idea how I could repay them. I had really needed to step outside myself and take care of someone else. They provided me a way to solve that need.

I wiped my tears and prepared to leave.

When I got to the gate, I looked back over at the baby graves, shaded by that large tree. I heard a rustling to my left. I saw what looked like an angel, all in white. She was hovering above a large tombstone. At first I thought she was just a statue, like you usually see in cemeteries, but then parts of her white veil blew back and I noticed she was see-through. In sign language, she motioned, “Thank you.”

The wind picked up and the leaves rustled, drawing my attention back to the Forgotten Angels. When I looked back at the girl, she was gone, but I felt a great sense of release. Gone was the guilt of leaving the babies. The message seemed to be that I’d served my purpose—or perhaps they’d served theirs—and it was okay to leave them be.

I don’t know if what I saw was an angel, or a ghost, or just a figment of my overactive imagination, but I can tell you that after I left the cemetery that day, I felt I had done a good thing. In all confidence I knew I could take care of myself without guilt.

Although some people think cemeteries are depressing, they can bring you peace — whether you go to just look at the beautiful statuary or if you find a personal message specifically for you. Don’t be scared to explore and allow yourself the ability to heal (like I did) through honoring the dead.

Emerian Rich is the author of the vampire book series Night’s Knights. Her novel Artistic License is the tale of a woman who inherits a house where anything she paints on the walls comes alive. Emerian has been published in a handful of anthologies by Dragon Moon Press, Hidden Thoughts Press, Hazardous Press, and White Wolf Press. She is a podcast horror hostess for HorrorAddicts.net, an internationally acclaimed podcast. To find out more, go to emzbox.com or follow her on Twitter or Facebook.

For the next year, I’m planning to put a cemetery essay up every Friday. If there is a cemetery that has touched your life, I would love to hear from you, particularly if there is one you visited on vacation — or if you got married in one. The submissions guidelines are here.

I'm co-author of a series about a succubus and her angel. Angelus Rose, the final book, came out in February 2020. I am the editor of Tales for the Camp Fire: An Anthology Benefiting Wildfire Relief. I'm also author of 199 Cemeteries to See Before You Die and Wish You Were Here: Adventures in Cemetery Travel--and a space opera trilogy.
View all posts by Loren Rhoads →
This entry was posted in Cemetery essay, Death's Garden Revisited and tagged Bay Area cemeteries, California cemeteries, children's grave, Concord California, St Stephens Cemetery. Bookmark the permalink.

4 Responses to How the Forgotten Angels Saved My Life