199 Cemeteries to See Before You Die 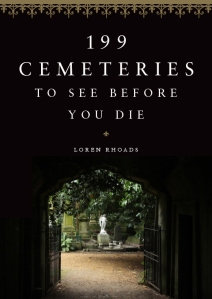 It’s been forever since I wrote an honest blog post. That’s because in September I was approached by a big New York publisher.  They asked if I might be interested in writing a cemetery travel book for them.  I said I’d been thinking of something along the lines of “99 Cemeteries to See Before You Die.”  The editor laughed.  They’d just been playing with that title in their marketing meeting.

After meeting a little more, they decided that 99 cemeteries weren’t enough. I wrote up an annotated table of contents in November. They were excited about how comprehensive it was. I went into research mode.

I finished the first draft in mid-January.  It was about twice the length it needed to be.  I’ve done two more drafts since, chopping it down, and turned it in yesterday.

I’m really excited about this book.  I learned a huge amount in the writing of it. The page designs I’ve seen were really lovely.  To be honest, I think I should’ve had 250 cemeteries — or maybe 500, because even 199 meant I had to leave things out.  But the deadline was very short, because the book is coming out this October. Maybe if this one sells well, I can do a sequel.

In the meantime, I need to clean up my desk, put my books back on the shelves, file away the research, clear out my emails, and prepare to get the editor’s notes so this bad boy can go to the printers. It’s not over yet.

I haven’t taken a day off since Christmas Day. I haven’t seen my friends in months.  I’m really proud of the work I’ve done, but it was hard to remain so focused for so long. I may wander down to Cypress Lawn today, get some sun, and listen to the birds sing. It’s time to put more living in my work/life balance.

If you’d like to preorder an amazing book about the 199 Cemeteries You Should See Before You Die, it’s up on Amazon at a good discount: http://amzn.to/2mip0G6.

I'm co-author of a series about a succubus and her angel. Angelus Rose, the final book, came out in February 2020. I am the editor of Tales for the Camp Fire: An Anthology Benefiting Wildfire Relief. I'm also author of 199 Cemeteries to See Before You Die and Wish You Were Here: Adventures in Cemetery Travel--and a space opera trilogy.
View all posts by Loren Rhoads →
This entry was posted in Cemetery essay, Good cemetery news and tagged 199 Cemeteries To See Before You Die. Bookmark the permalink.

13 Responses to 199 Cemeteries to See Before You Die