Cemetery of the Week #159: Trafalgar Cemetery 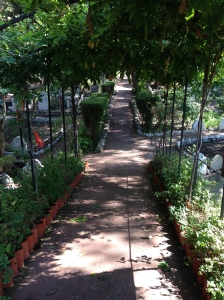 Trafalgar Cemetery view and all photos that follow by Deb Dauber.

Gibraltar lies at the end of the Iberian peninsula at the mouth of the Mediterranean. While it shares its northern border with Spain, Gibraltar was captured by the British in 1704 and remains under British protection.

This pretty little graveyard, originally called the Southport Ditch Cemetery, is mostly filled with people who died in the recurrent yellow fever epidemics of the early 19th century. Consecrated in 1798, it was named for the Southport Ditch, part of the town’s natural defenses, that dates back to Gibraltar’s Spanish era in the 17th century. 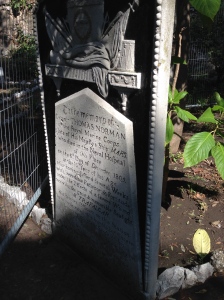 The headstone of Lt. Norman.

Among the approximately 108 people buried here lie two sailors wounded during the Battle of Trafalgar in October 1805. Lieutenant William Forster of the HMS Columbus and Lieutenant Thomas Norman of the HMS Mars succumbed of their injuries after the battle was over. Norman’s headstone records that he “…died in the Naval Hospital of this Place…after having suffered several weeks with incredible Patience & Fortitude under the Effects of a fever & Wound rece’d in the great and memorable Seafight of Trafalgar.”

All the men who died during the course of the battle with Napoleon’s fleet were buried at sea.

Victims of other Napoleonic sea battles are buried here, however. Among them are Thomas Worth and John Buckland of the Royal Marine Artillery. They were killed by the same single shot in the Bay of Cadiz in 1810.

Also here lies John Brugier, who served as purser on the HMS San Juan Nepomuceno. That Spanish ship was captured at the Battle of Trafalgar, then towed into the harbor to be used as a supply warehouse. 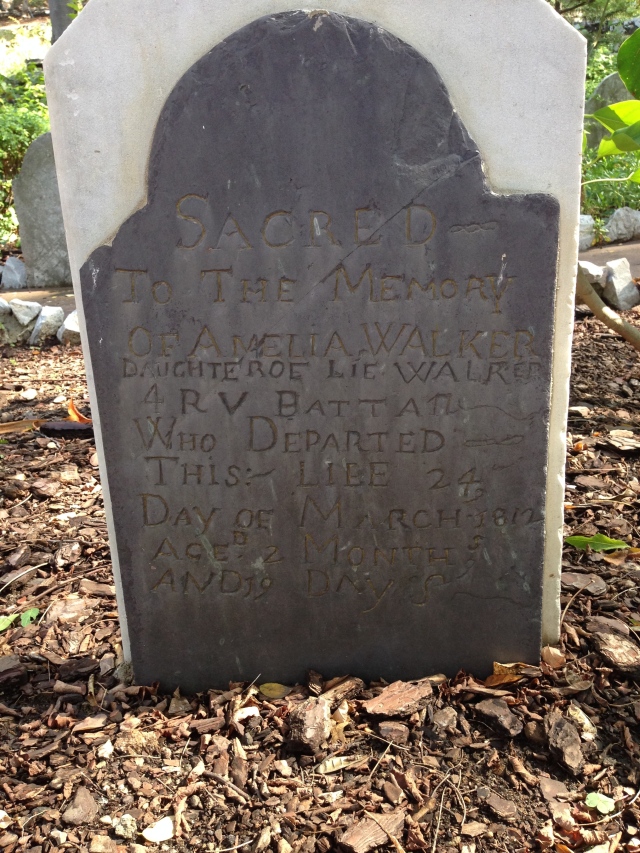 Many of the graves here remember children of British soldiers stationed here who died of disease. The hand-lettered monument to Amelia Walker mentions her father, a lieutenant, but says nothing of her mother.  Amelia died at two months and nineteen days in March 1812.

After 1814, the little cemetery was considered full. Its final burial took place in the tomb in the northeast corner in 1838.

In 1992, the Royal Navy donated an anchor as a memorial to those buried at sea during the Battle of Trafalgar.

Information on visiting the Gibraltar Cemetery

More information on sightseeing in the Gibraltar Cemetery

The travel snapshots post on Cemetery Travel that inspired this listing.

I'm co-author of a series about a succubus and her angel. Angelus Rose, the final book, came out in February 2020. I am the editor of Tales for the Camp Fire: An Anthology Benefiting Wildfire Relief. I'm also author of 199 Cemeteries to See Before You Die and Wish You Were Here: Adventures in Cemetery Travel--and a space opera trilogy.
View all posts by Loren Rhoads →
This entry was posted in Cemetery of the Week and tagged 199 Cemeteries To See Before You Die, Gibraltar Cemetery, military cemetery, Napoleon. Bookmark the permalink.

2 Responses to Cemetery of the Week #159: Trafalgar Cemetery