Cemetery of the Week #162: Oakland Cemetery

In February 1843, the Iowa territorial legislature deeded one square block of land to the people of Iowa City for a public cemetery. Iowa itself didn’t attain statehood until December 28, 1846.

Since that initial city block, the cemetery has grown to forty acres. Unlike most modern cemeteries, which rely on the dividends from their perpetual care fund to pay for maintenance, Oakland Cemetery is a non-perpetual care cemetery, supported by city taxes. It’s overseen by the city’s Parks and Recreation Department.

Among the people buried beneath the oak trees are Robert E. Lucas, first governor of the Iowa territory, who served from 1838-1841; Samuel J. Kirkwood, Iowa’s two-time governor who served during the Civil War before going on to become a US senator, secretary of the interior, and then minister to Spain; several presidents of the Univerity of Iowa; and Mauricio Lasansky, an Argentine-born artist and printmaker.

Oakland Cemetery is most widely known for the supposedly cursed eight-and-a-half-foot-tall bronze angel standing over the Feldevert grave.

Born in 1836, Teresa Dolezal worked as a physician in Bohemia. After she immigrated to Iowa City with her son Eddie, she wasn’t allowed to work as a doctor, so she became a midwife.

In 1891, meningitis (an infection of the membrane around the brain) killed 18-year-old Eddie. Teresa buried him in Oakland Cemetery. To mark his grave, she chose a tree stump monument, to symbolize life cut off in its prime.

Teresa moved to Oregon and married Nicholas Feldevert. When he died in 1911, she returned to Iowa City so she could bury her husband’s ashes near her son. Teresa purchased a larger plot in Oakland Cemetery, buried her husband’s ashes there, then had her son’s remains transferred to it. Eddie’s tree stump monument was also moved to the new plot.

Teresa hired Mario Korbel, a Bohemian artist in Chicago, to mark their graves. His remarkable bronze angel arrived via the railroad in November 1912.

Twelve years later, Teresa succumbed to cancer in November 1924. Her ashes were buried in the family plot.

The bronze angel began to oxidize. Instead of taking on a green patina, as one might expect, the angel turned black. At that point, urban legends grew up around the angel.

Some say the angel was struck by lightning the night after Teresa’s funeral. Some say Teresa had vowed to remain faithful to her husband and the angel’s color revealed her infidelity. Others claim the blackened angel was evidence that Teresa had been a witch.

Urban legends swirl surround the Black Angel: if you kiss it, you could be struck dead. Pregnant women had to avoid its shadow or risk miscarriage. Only if a virgin was ever kissed in front of the statue could the curse be broken.

It’s harder to test that theory these days. Vandals have broken the angel’s fingers, so cemetery security watches visitors closely.

To be honest, the weather in Iowa is hard on bronze angels. In Council Bluffs, almost 250 miles away, a second black angel marks the grave of Ruth Ann Dodge, spiritualist wife of General Grenville M. Dodge, a Civil War veteran who became the chief engineer of the Transcontinental Railroad. 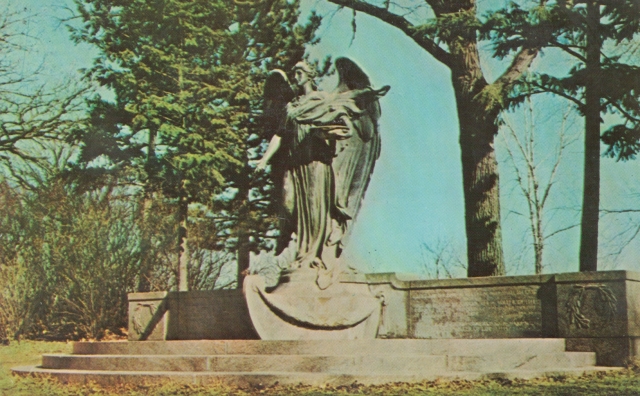 Vintage postcard from the author’s collection.

That angel, sculpted by Daniel Chester French, was created as a fountain, spilling the water of life from a basin in her hand. The figure was inspired by a dream Ruth had: a woman in a shining white gown appeared to her three times, urging her to drink from the vessel she carried. During the third time, Ruth drank — and she died a few days later. She was buried in Fairview Cemetery in 1916.

Oakland Cemetery is included in 199 Cemeteries to See Before You Die.

A more sensational report on the legends, which some pretty photos of the cemetery

A paranormal team’s investigation in the Press-Citizen

I'm co-author of a series about a succubus and her angel. Angelus Rose, the final book, came out in February 2020. I am the editor of Tales for the Camp Fire: An Anthology Benefiting Wildfire Relief. I'm also author of 199 Cemeteries to See Before You Die and Wish You Were Here: Adventures in Cemetery Travel--and a space opera trilogy.
View all posts by Loren Rhoads →
This entry was posted in Cemetery of the Week and tagged angels, cemetery curse, Daniel Chester French, ghost story, Iowa cemetery, Oakland cemetery. Bookmark the permalink.