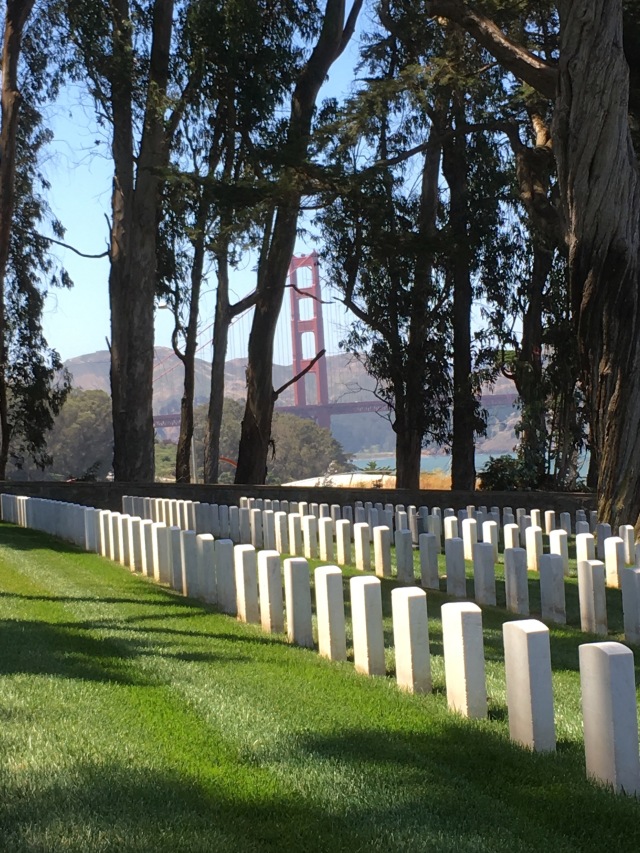 I haven’t updated this blog in much too long.  I ended up being much busier than I expected in October. It’s always my busiest month, but this year was nuts. At this point, I have an essay I need to turn in and a couple of podcasts I’ve trying to lock down for next year. Then the 199 Cemeteries promotion is done until 2018.

Of course, I am taking the National Novel Writing Challenge again, trying to finish a book (in my case, a nonfiction book) in the month of November.  I tend to get depressed when I finish a book — naturally, I think, after the excitement of getting something into print passes.   I decided the cure for moping over 199 Cemeteries was to dive straight into a new book.

In this case, it’s actually an old book idea, one that I’ve been toying with for more than 15 years. By the end of this month, I would like to finally have the first full draft of The Pioneer Cemeteries of the San Francisco Bay Area.

Obviously, this book will have a much smaller focus in geographic area than 199 Cemeteries, but I’m visiting and photographing each of these cemeteries myself: from Cloverdale in the north to Gilroy in the south.  I think there will be 80 cemeteries in the final book, although I expect there will be something closer to 100 in the first draft.  That’s not even all of the Bay Area cemeteries by any stretch (there are rumored to be 90 in Sonoma County alone), but it’s as many cemeteries as any sane person might be likely to visit.  It’s taken me twenty years to cover my first 100 local cemeteries and I’m not done yet.

The book will include some of the cemeteries I’ve written about for Cemetery Travel: Woodlawn, Lick Observatory, Mission Dolores, Mare Island, Hills of Eternity, the Stanford Mausoleum, etc. It will also have a bunch that I haven’t written about here but should: Tulocay (where Mary Ellen Pleasant is buried), Watsonville Pioneer (where transgender stage driver Charley Parkhurst rests), along with the final resting places of the survivors of the Donner Party, survivors of grizzly bear attacks, Forty Niners, Comstock silver barons, Native Americans, Portuguese fishermen, Mexican rancheros, and America’s first black millionaire.

It seems particularly important to finish this project now, since the firestorms this year threatened some of the historic cemeteries I want to include. I watched in horror last month as the town of Calistoga was evacuated, knowing that the emphasis would rightly be on saving homes and businesses from the flames, not on the fragile old cemetery that lies just outside of town.  As this writing, I haven’t heard if the Rural Cemetery in Santa Rosa survived the conflagration. Once that history is erased, whether by wildfire or earthquakes or vandalism, it won’t be replaced. Land is too valuable here.

I hope to get back to putting up a Cemetery of the Week every Wednesday soon.  I’d love to publish more Death’s Garden essays.  I’ll announce my 2018 speaking events as soon as I get them settled. I plan to organize some field trips to local cemeteries, for those who might like to join me. And I’ve got 20-some more cemeteries to research for this book.

There’s no rest for the morbid, baby.  I’ve got a lot of work to do.

I'm co-author of a series about a succubus and her angel. Angelus Rose, the final book, came out in February 2020. I am the editor of Tales for the Camp Fire: An Anthology Benefiting Wildfire Relief. I'm also author of 199 Cemeteries to See Before You Die and Wish You Were Here: Adventures in Cemetery Travel--and a space opera trilogy.
View all posts by Loren Rhoads →
This entry was posted in Pioneer Cemeteries of the San Francisco Bay Area and tagged 199 Cemeteries To See Before You Die, Nanowrimo San Francisco cemetery, pioneer cemeteries, San Francisco Bay Area. Bookmark the permalink.