Cemetery of the Week #164: Purissima Cemetery 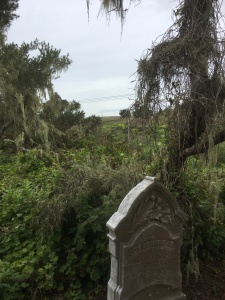 Just south of Spanishtown (now called Half Moon Bay), the Northern California town of Purissima was established in the 1860s. According to a monument placed by E Clampus Vitus, “The town, with store, school, hotel, saloon, dance hall, harness shop, and blacksmith shop, flourished from the early 1860s to the age of the motor car.”

Purissima’s population was mostly German, Scottish, and British immigrants, judging from the names on the cemetery’s tombstones. They were primarily dairy farmers who ranched the grasslands between the Coastal Range and the sea.

At one point, Purissima was expected to become the most important town on the San Mateo County coast. Instead, it could not compete commercially with Spanishtown, which was situated in an easier-to-reach location. Half Moon Bay — renamed in 1874 — now lies at the confluence of Highway 92, which crosses the mountains from San Mateo, and coastal Highway 1. In contrast, Purissima stood down Highway 1, miles inland from the sea. Even the stagecoach had to pass through Half Moon Bay before it reached Purissima.

By 1930, after the death of some of its founders, Purissima was all but abandoned. The cemetery and remnants of a schoolhouse are all that remains of the ghost town.

About five miles south of Half Moon Bay, the Purissima Cemetery stood on a little knoll on the south side of Verde Road. John Purcell deeded the cemetery, with its lovely ocean views, to the town in 1868. I went looking for it in the summer of 2011, despite warnings that poison oak blanketed the site. Directions on the internet suggested that visitors leap over the drainage ditch alongside Verde Road. I found the right section of Verde Road, all right, but the cemetery had no sign, no driveway, no address, and there seemed to be no indication it had ever existed. Purissima Cemetery had become a ghost graveyard, as lost as the ghost town for which it was named. 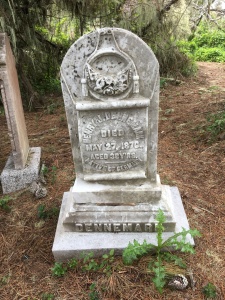 In 2013, the Coastside Land Trust acquired the Purissima Old Town site. They pursued a clear title to the cemetery land, planning to revitalize the old cemetery by using it as a green burial ground: no embalming, biodegradable caskets, no vaults or grave liners. It took years to clarify the permitting.

I made a second attempt to visit the cemetery last weekend. There’s still no driveway, but there is a place to pull over on the opposite side of Verde Road. Paths have been mowed through the underbrush, trees trimmed back, and signs made the place welcoming.

Approximately sixty historical graves are recorded in the cemetery. Most are unmarked now, due to time, weather, nature, and vandalism. Some have gravestones that date to the 1870s. Others are marked with relatively modern headstones. It appears that people who lived in the town of Purissima are welcome to be buried in their family plots. Some gravemarkers “bear familiar Coastside names,” according to Half Moon Bay magazine.

Even on a gray March day, the place was charming. Birds were singing.  The cemetery looks toward the sea in two directions. Flags of Spanish moss, festooning the old pines, waved in the breeze. At the top of the rise, masses of daffodils bloomed. 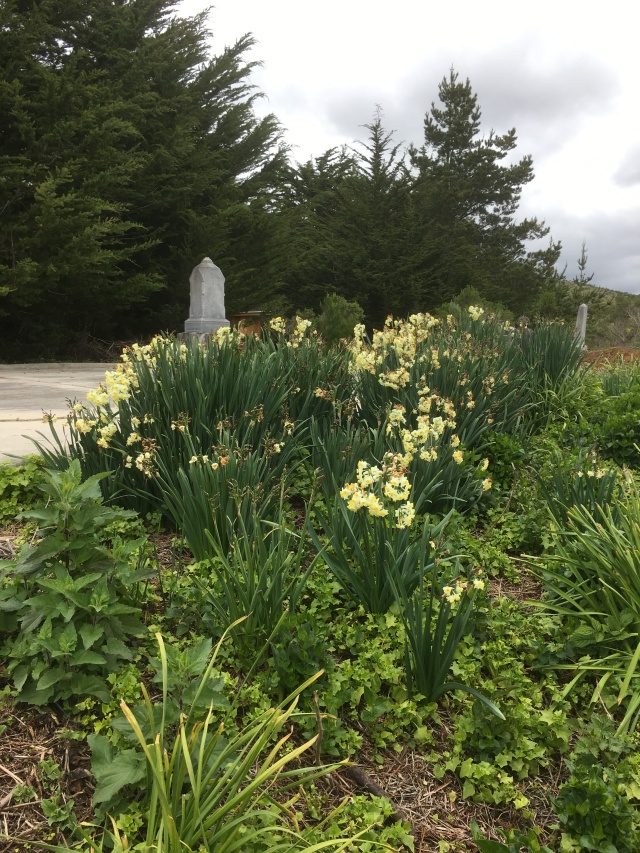 The new owners have reset the antique stones, although some are still discolored from the years they laid in the dirt.  There’s still work to do, as evidenced by the obelisk remembering young James Henry and Samuel Miller, which has a dangerous slant to it.

Still, I’m glad that the cemetery has been rescued and that the grounds are open to receive new burials once again. I’m always thrilled when history can be retrieved from the brink of destruction.

I'm co-author of a series about a succubus and her angel. Angelus Rose, the final book, came out in February 2020. I am the editor of Tales for the Camp Fire: An Anthology Benefiting Wildfire Relief. I'm also author of 199 Cemeteries to See Before You Die and Wish You Were Here: Adventures in Cemetery Travel--and a space opera trilogy.
View all posts by Loren Rhoads →
This entry was posted in Cemetery of the Week, Good cemetery news and tagged California cemeteries, California history, Half Moon Bay, Purissima Cemetery, San Francisco Bay Area. Bookmark the permalink.