Cemetery of the Week #168: the New Haven Crypt 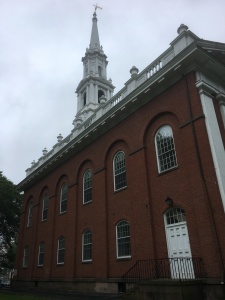 Originally people in New Haven, Connecticut were buried in the green in the center of town. The space started to be used as a burial ground by settlers of the New Haven Colony in the 1600s. Estimates range from 5-10,000 people were buried there before 1821, when the Grove Street Cemetery opened nearby.  At that point, headstones were moved to the new cemetery, but the bodies were left in place below the sod in the Green.

The original First Church of Christ in New Haven was built on a corner of the Green in 1639.  It was rebuilt twice in the same place, but when the congregation voted to expand their meeting house, there was no open space on the Green.  Instead, they decided to build on pilings above part of the graveyard on the Green. Construction of Center Church began in 1812 and was completed in 1814.

The graves beneath the church were left in their original places and enclosed in what’s called a crypt, even though it stands at ground level.  The surviving stones date from 1687 to 1812 and have been called the “last remaining evidence on the New Haven Green of the first colonists who settled here to establish a new life in America.” 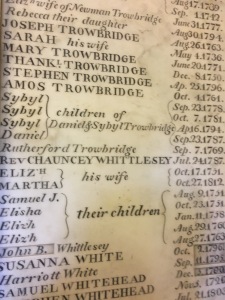 An estimated 1000 people (or perhaps more) are buried beneath the church. Plaques inside the church’s foyer list names and death dates of people known to be buried in the crypt. In those days, it was common for a family to reuse the same name for a child over and over in the same generation until one of them finally survived to adulthood.

The first map of the crypt was made by Henry Trowbridge in 1880. 139 gravestones survive inside the crypt, some of which have been rendered illegible by time. The oldest stone marks the grave of Sarah Rutherford Trowbridge, who died in 1687.

Originally the floor of the crypt was dirt, which was replaced by concrete as a way to control the damp. In 1985, they (who?) realized that the concrete was too successful in trapping moisture beneath it. The gravestones were acting as wicks, pulling the moisture upward, which was leading to degradation of the stone.  In 1990, the concrete was broken up and removed by being passed though the little windows to the Green outside. Walkways of unmortared bricks were laid between the stones, allowing them to breathe.

The ceiling is low down there. At one point there was talk of lowering the floor so there would be more room, but the bodies are not actually buried very deeply.  In the end, the decision was made to leave the skeletons in place. The crypt is plenty bright enough, but it did make me feel slightly claustrophobic when all our tour group gathered in one area.

Among those buried here include Benedict Arnold’s first wife, Margaret; the family of President Rutherford B. Hayes; Reverend James Pierpont, a founder of Yale College, and many more. One of the stones remembers Sarah Whiting, “the painful mother of eight children, of whom six survive.” When she died in 1726, she was called “fruitful, virtuous, and weary.”

The New Haven Crypt Association preserves the site, trains volunteers as tour guides, and offers public tours most Saturdays from April to October from 11 am to 1 pm.

Outside the church is a cenotaph in honor of Theophilus Eaton, first governor of the New Haven Colony, who served for 19 years. He was also a founder of the First Church of Christ, from which Center Church derived, and is buried beneath the church’s foundation. The large marble plaque was placed on the church by the city when the gravestones were removed from the Green.

In what’s left of the churchyard, there are also plaques for General Edward Whalley and Goffe, two “regicides” who fled to New Haven to escape execution. Whalley and William Goffe signed the death warrant for King Charles I during the English Civil War. A tall monument remembers John Dixwell, one of the Regicide Judges, who settled in New Haven in 1665 under an assumed name.

A history of the Crypt on the Center Church site: http://centerchurchonthegreen.org/history/crypt/

Tales from the Crypt: https://ctcryptkeeper.wordpress.com/

I meant to say that I know of at least one other church built above an earlier graveyard in the US. The graveyard where Edgar Allan Poe is buried in Baltimore has a church up on piers above the graves:  https://cemeterytravel.com/2013/10/09/cemetery-of-the-week-110-westminster-hall-burying-ground/

I'm the editor of Tales for the Camp Fire: An Anthology Benefiting Wildfire Relief. I'm also author of 199 Cemeteries to See Before You Die and Wish You Were Here: Adventures in Cemetery Travel, as well as a space opera trilogy. I'm co-author of a series about a succubus and her angel.
View all posts by Loren Rhoads →
This entry was posted in Cemetery of the Week, Church burial and tagged Connecticut cemeteries, New Haven Crypt, puritan cemeteries, Revolutionary War graveyard, skulls. Bookmark the permalink.

13 Responses to Cemetery of the Week #168: the New Haven Crypt