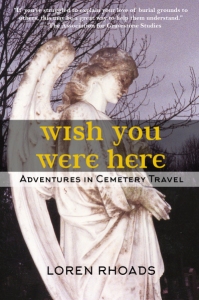 When I put together my first book of cemetery essays, I had so many essays written that I had to leave some of them out. I tried to be conscious of how many California cemeteries I included, how many times I rambled around graveyards with my mom, how many times I raved about how beautiful any particular burial ground was.  I wanted to include as many historically significant sites as possible, which meant leaving out some of my more personal stories. I wanted Wish You Were Here: Adventures in Cemetery Travel to be complete, but not an omnibus.

In 2014,  the year that the Red Room site went down — taking my blog with it, I switched over to Wattpad. It wasn’t a blogging platform in the same sense, but it allowed writers to publish books in a serial format.  The Wattpad team encouraged me to put together some nonfiction. They even helped by creating a cover for me.

That first book was All You Need is Morbid. It’s a collection of essays about traveling with my husband. Of course, it includes some cemetery essays, including a trip high into the mountains of the California Gold Country to find the tiny village graveyard of Iowa Hill, visiting the Bone Chapel of Kutna Hora on my birthday, searching out the Capuchin Catacombs on our first day in Rome, and stumbling across casts of people buried in the ruins of Pompeii.

All You Need is Morbid made the Featured Nonfiction list on Wattpad shortly after it was published. Then it won one of the first ever HQ Love Watty Awards.

Wattpad has included the book in a number of promotions since then.  Because they’ve been so generous, it’s been my intention to put together another essay collection for a while. This summer, I finally assembled a new book called Graveyard Field Trips.

This time I concentrated on stories about sharing my love of cemeteries with other people:

The whole book is completed now and can be read for free on Wattpad.  It’s spooky, sentimental, star-struck, and deeply curious about life, death, and all the messy, beautiful things that make us human.  Please check it out at https://www.wattpad.com/myworks/151274118-graveyard-field-trips-a-memoir.