Considering I didn’t have a new book out in 2018, I was pleased with the attention that 199 Cemeteries to See Before You Die continued to draw. It opened doors for me to speak at a bunch of new (to me) venues last year, too. Hopefully, I persuaded some new people to check out the beauty of these fragile historic places. 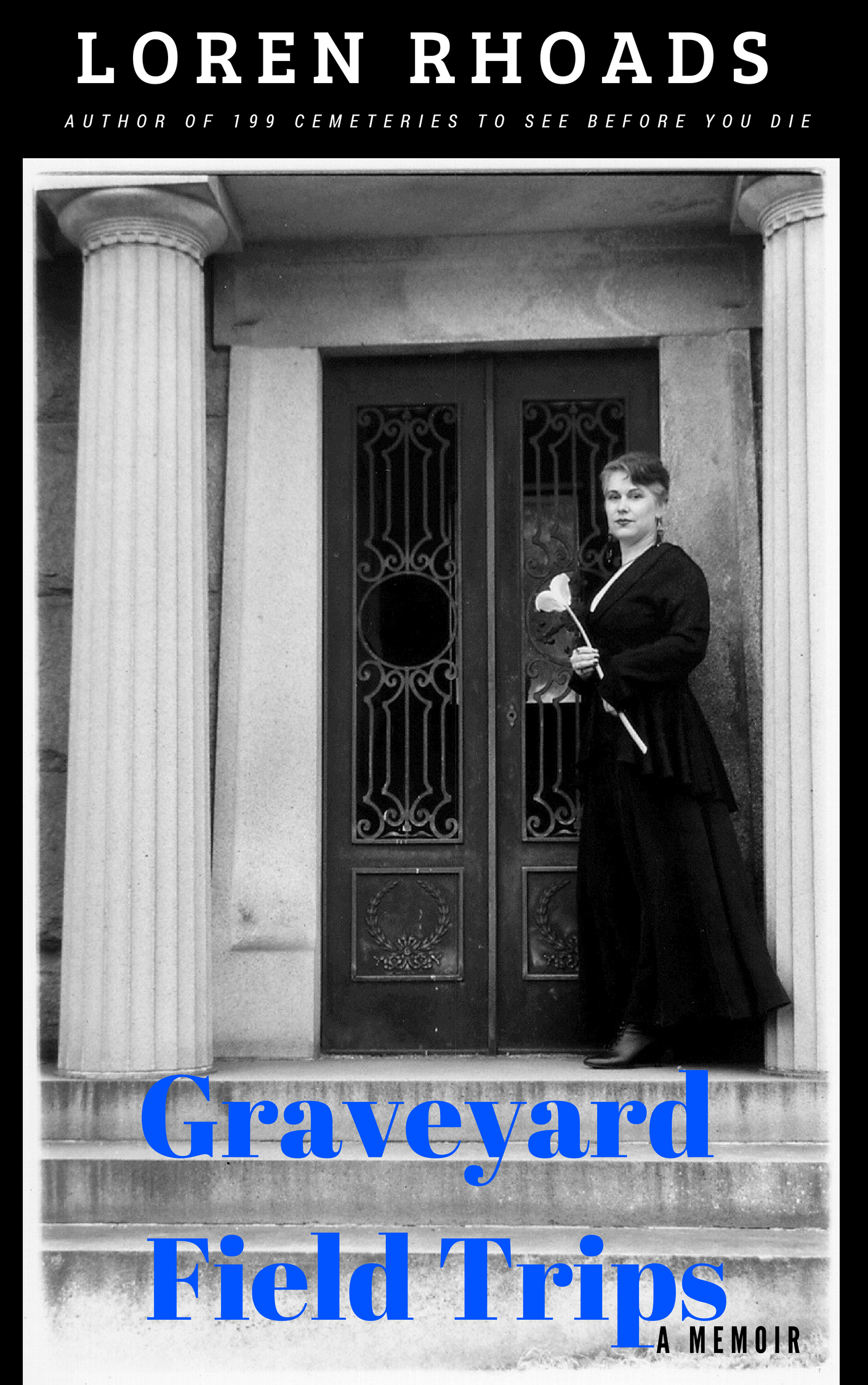 I put a collection of my cemetery essays up on Wattpad in July and August. Graveyard Field Trips: A Memoir gathers essays I published on Gothic.Net and GothicBeauty.com, along with the introduction to the original edition of Death’s Garden: Relationships with Cemeteries.

At the moment, I have a proposal out for my new book, The Pioneer Cemeteries of the San Francisco Bay Area, and another proposal for a nonfiction book with Lisa Morton, president of the Horror Writers Association, that I’m excited about.  Hopefully those books will find homes in 2019.

I’m not sure what cemetery project I’ll work on after those are done. Maybe I’ll finally finish the second volume of Death’s Garden.

“10 American Cemeteries to See Before You Die” appeared on The Daily Beast in April 2018. My collection of cemeteries to see in springtime was illustrated with images from 199 Cemeteries.

I wrote 9 cemetery columns for the Horror Writers Association’s newsletter about the histories of burial and cremation, cemetery ghost stories, and gravestone iconography.

“The Madam’s Haunted Tomb” served as part of the Ghosts in the Graveyard series on Roxanne Rhoads’s All Things Halloween blog. I talked about a ghost legend centered on New Orleans’ Metairie Cemetery.

Here on CemeteryTravel.com, I was proud to put together a two-part series on the “Resting Places of Horror Icons.” Here’s part one. 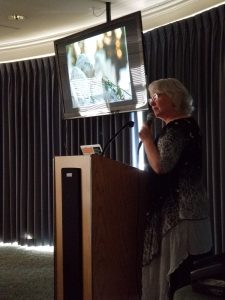 At Cypress Lawn in Colma in September

I spoke to Angela Hennessy’s “Over My Dead Body” class at the California College of the Arts in February. My lecture, called “Memento Mori: Even Graveyards Die,” covered the demolition of the historic cemeteries of San Francisco.

In April, for the “Memento Mori” evening of the Reimagine End of Life week, I talked about the dismantling of “Laurel Hill Cemetery: San Francisco’s Garden Cemetery” at the Swedish American Hall.

I talked about how I came to write 199 Cemeteries to See Before You Die at the Association for Gravestone Studies conference in Danbury, Connecticut in June.

In September, I showed slides of my favorite cemeteries from 199 Cemeteries to See Before You Die at Cypress Lawn Memorial Park in Colma, California.

Professor Steven Brown invited me to talk about cemeteries to his horticultural class as San Francisco’s City College on October 1, 2018.

My last lecture of the year was near to my heart.  For years, I’ve wanted to trace the development of San Francisco’s Old Mission Cemetery through tourist postcards.  I finally got to do it as part of the Odd Salon’s “Cemetery Stories” event during the Litcrawl on 10/20/18. My lecture was called “Postcards from History.” 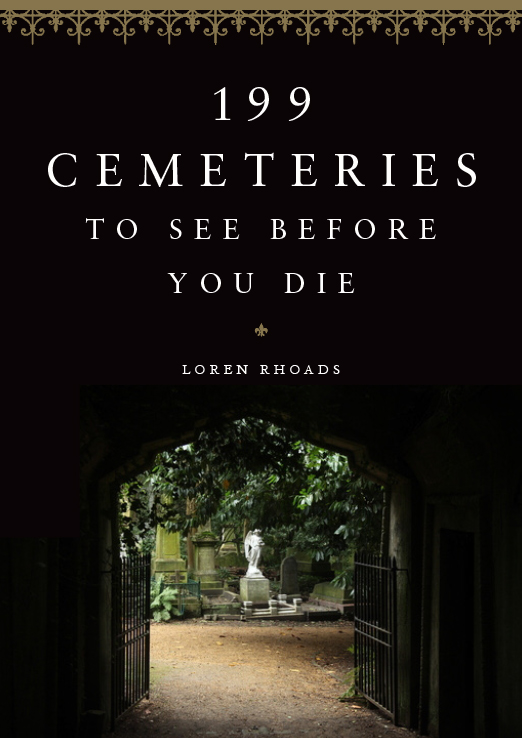 Extreme Genes, my first genealogy podcast ever, chatted with me about cemeteries on 3/25/18. My bit starts 24 minutes in:
https://extremegenes.com/2018/02/25/episode-226-black-history-month-advances-in-african-american-research-199-cemeteries-to-see-before-you-die/

Mark from On the Odd chatted with me about 199 Cemeteries on October 26, 2018: https://ontheodd.com/199-cemeteries-to-see-before-you-die/

And I talked with Timothy Renner about cemeteries for his Strange Familiars podcast, but it hasn’t been released yet.

“Loren Rhoads takes us through the gates of the Cemetery” for Women in Horror Month on Library of the Damned: http://libraryofthedamned.com/2018/02/22/wihm-interview-loren-rhoads-takes-us-through-the-gates-of-the-cemetery/

Sonora Taylor invited me by for a Q&A on her blog in August. Mostly we talked about 199 Cemeteries, but also got into my Alondra short stories: https://sonorawrites.com/2018/08/15/ask-the-author-a-qa-with-loren-rhoads/

Erin Al-Mehairi invited me by her Oh, for the Hook of a Book! blog for a long conversation about cemeteries and more on 10/30/18: https://hookofabook.wordpress.com/2018/10/30/hookinterview-cemetery-travel-writer-and-horror-author-loren-rhoads-lohf/

199 Cemeteries to See Before You Die continued to get some press attention this year, even though the book’s been out more than a year. Most of these stories were nice surprises when I stumbled across them online.

I served as a consultant about Potter’s Fields for “State-Funded Funerals: What Happens to the Unclaimed Dead” on How Stuff Works. I’m a fan of the podcast, so this was an honor. https://people.howstuffworks.com/culture-traditions/cultural-traditions/state-funded-funerals-what-happens-to-unclaimed-dead.htm

A feature story on 199 Cemeteries called “From Established to Eccentric, These Cemeteries are To Die For” appeared on Gonomad in April: https://www.gonomad.com/109276-from-established-to-eccentric-these-cemeteries

Lifestyles over 50 reprinted Larry Bleiberg’s “10 Great Cemeteries to See Before You Die”: https://lifestylesafter50.com/10-great-cemeteries-to-visit-before-you-die/

Atlas Obscura did a lovely piece called “In Search of Cemeteries Alive With Beauty, Art, and History” for Halloween: https://www.atlasobscura.com/articles/cemeteries-to-visit-before-you-die-monuments

And the Steampunk Explorer put together an in-depth 3-part series of historic cemeteries that would appeal to those of a steampunk persuasion:

Part 3: The Rest of the World
https://steampunk-explorer.com/articles/exploring-historic-cemeteries-part-iii

A catch-all category for things that made me smile this year.

199 Cemeteries made the preliminary ballot for the Horror Writers Association’s Bram Stoker Award in Nonfiction. While the book didn’t advance to the final ballot, it was still an honor to make the long list.

The podcast Two Girls One Ghost read my fan letter on air after they mentioned 199 Cemeteries in an earlier episode. Here’s a link to their Haunted Cemeteries podcast: https://audioboom.com/posts/6692482-episode-27-rest-in-peace which originally aired on 2/25/18.

199 Cemeteries made a Buzzfeed list! “30 Gorgeous Products for Anyone with a Morbid Mind”  appeared on 4/13/18: https://www.buzzfeed.com/malloryannp/gorgeous-products-morbid-mind

I came across the first edition of Wish You Were Here: Adventures in Cemetery Travel listed on Amazon for $1200. I’d gladly set you up with one for 10 bucks. 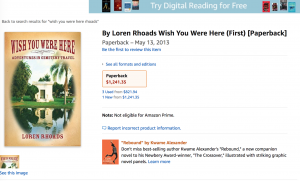 Finally, I got to provide a cover blurb for the first time.  I am really excited about Erin-Marie Legacey’s Making Space for the Dead, which is coming from Cornell University Press in April 2019. You can preorder it on Amazon: https://amzn.to/2RkuyiT.

2 Responses to Cemetery Press in 2018